The fallout from the Chernobyl nuclear power plant explosion remains as politicised as ever, 28 years on. 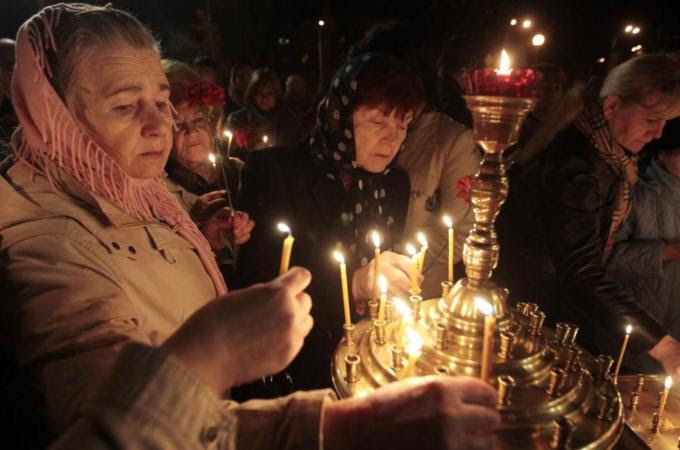 On April 26, 1986, one of the four reactors of the Chernobyl nuclear power station exploded as a result of what was meant to be a routine systems test. The explosion and the fire that continued for 10 days afterwards discharged a large amount of radioactive substances into the atmosphere, dramatically increasing the level of radiation in the local area. The quantity of radioactive isotopes released into the atmosphere was 300 times greater than Hiroshima; in some places, the level of radiation was almost 77,000 times higher than the average background norm and 40 times the maximum permissible. Over 100 radioactive elements released during the explosion contaminated substantial amounts of soil and waterways in Ukraine, Belarus and Russia. Many other neighbouring countries – Austria, Finland, Germany, Norway, Romania and Sweden – suffered radioactive contamination as well. The fallout from Chernobyl reached as far as Canada and the United States. To this day, there is no agreement on the scale of human suffering and loss. Official data projected only 4,000 deaths related to the explosion, including the immediate radiation burn injuries and the deaths of over 30 plant workers and firemen. Alternative studies find that the death toll is likely to be over 200,000 for the population of Ukraine, Belarus, and Russia, and up to 6 million people globally. Such a discrepancy reveals how politicised this topic remains even decades after the explosion. One of the worst nuclear accidents in history and one of only two “level seven” events on theInternational Nuclear and Radiological Event Scale had a profound political and social impact which lasts until today. Political after-effects It was claimed that life was divided into before and after Chernobyl. Ulrich Beck, followed by many others, described Chernobyl as an anthropological shock. The name of a small town in Ukraine that gave its name to a nearby nuclear power plant became a globally recognised symbol and a significant element of political transformations.

Along with other risks and disasters of recent decades, Chernobyl contributed to the re-arrangement of relationships between the state, communities and individuals in affected countries and beyond. Citizens around the world were demanding of their states to take responsibility for the ecological safety of their populations, to restrict and control health damaging industries and to bring environmental issues into the centre of political debates and actions. Mass protests against nuclear programmes took place in Italy, Germany, Hungary and many other countries. The most profound political changes occurred in such post-Soviet countries as Ukraine, Belarus, Lithuania, Armenia and Russia and eventually in the USSR itself.

The environmental field of Chernobyl provided a safe, “non-political” umbrella for citizens’ mobilisation and encompassed all sorts of political projects, including nation-building ones. The latter created an important platform for political alternatives to the Soviet Union. Anti-nuclear activism spread across Russia, Lithuania and Ukraine. Public reaction was so fierce that the Soviet authorities had to abandon construction of nuclear plants near the Black Sea. The same happened in Belarus with the plan to build a Belarusian power plant. The Chernobyl disaster was formative for one of the first national parties in Belarus – Belarusian Popular Front – and is still kept on the party’s political agenda. The Belarusian Popular Front initiated the Chernobyl Way Rally in 1989, and it remains one of the largest annual opposition events in Belarus. Social after-effects My experience as a volunteer in the Chernobyl-effected territories in Ukraine – and further research – helped me understand that remembering Chernobyl is not only a commemoration of the immediate victims of the disaster but also a recognition of the experience of the hundreds of thousands that this event has displaced, condemning them to a life of refugees in their own country.   The level of radioactive contamination caused the evacuation of 135,000 people residing in nearly 100 towns and villages within 30km of the reactor soon after the explosion and the resettlement of over 335,000 people later. The effected areas were overwhelmingly rural with tight social connections and a strong attachment to the land. Leaving their homes, pets, family graves and belongings accumulated over generations was a personal tragedy for many of those resettled. This refugee experience was reminiscent of how World War II devastated these areas a little over 40 years prior to Chernobyl. Compulsory relocation to new and often unfamiliar areas broke previous support networks, while some received rather alienating reception from “non-affected” populations. If refugees received a warm and supportive welcome from the population in the days after the disaster, it changed as information about the danger of radiation spread, spiced with rumours and fears of unknown and invisible threats that can come from contact with contaminated objects.

The relationship between affected and non-affected groups grew even colder as welfare benefits were introduced for the effected groups; changing laws about the status of the survivors complicated the relationship within some effected communities. Survivors often had to face integration problems usual for refugees, including social isolation, fear, homesickness, breakdown of their familiar lifestyle, cultural clashes (in this case often between rural and urban cultures) and the discourse of welfare dependency.

Those who were given the option to remain in their homes faced and continue to face unemployment and poverty. The collapse of the USSR and following economic decline, as well as the withdrawal of all Union Chernobyl funds, adversely affected overall quality of life and the subsequent management of the disaster’s after-effects. Monetary income in these areas, as in many other rural regions, is low and there are not many employment opportunities outside agriculture.

Labelling goods as “Produced in Chernobyl”, even if they formally meet the safety standards, does not help any industry, especially agriculture. Protective legislation in Ukraine provides welfare support but the accompanying ban on new buildings in the area does not help to create jobs. Belarus took a somewhat different approach by reducing welfare support and declaring some affected land “recovered” and fully suitable for agriculture. Whether these areas are truly safe is not often discussed in public. Today Chernobyl continues to have social, economic, and cultural impacts on many communities and these effects are likely to last beyond the upcoming 30th anniversary. With Ukraine facing serious political problems, Belarus building its own nuclear plant despite citizens’ protests, Russia being one of the largest producers of nuclear energy, we are yet to see how these countries are going to respond to the broad social, economic and political challenges prompted by Chernobyl over the last 28 years. Evgenia Ivanova is the editor-in-chief of a new Russian-language feminist journal “Women in Politics”. She is a doctoral student in Political Theory at the University of Oxford.