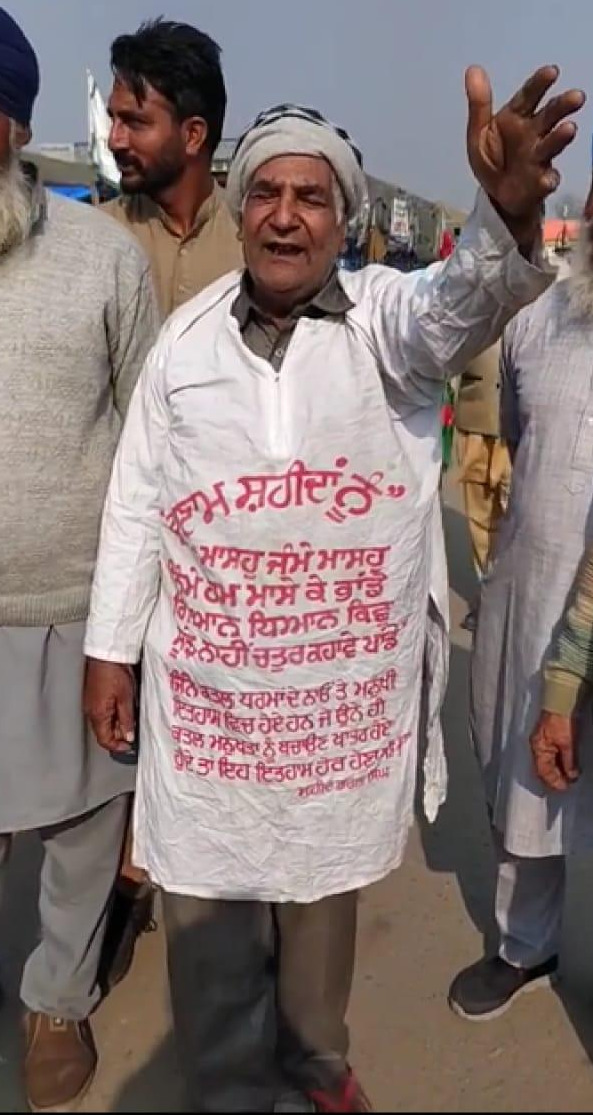 As a part of the social media Campaign #KnowYourShaheed started by Punjab Women Collective and Kractivist, today we pay tribute to RavinderPal

Ravinder Pal, 70, was the most sought after person at Singhu Border protest site for selfies because of his attire. He had painted various slogans on his kurta. WIth his poems and creative ways of registering dissent, he had emerged as an attraction for everyone at the protest site.

A dedicated comrade of the Communist Party of India (Marxist), he was also associated with the All India Kisan Sabha (AIKS). He was actively participating in the protests that had begun in Punjab soon after the three laws were passed by the government.

He left home at Ikolaha village near Khanna town in Punjab’s Ludhiana district against the wishes of his family members to take part in ‘Dilli Chalo’ campaign on November 25. He said, he wanted to go one last time for the protest because it was for everyone’s rights.

When the confrontation was taking place between the police and agitating farmers, on the way to Delhi, his worried family called him, but he was unfazed by the police brutality. He informed them that the farmers had broken the barricades to reach Delhi and that the Modi government would have to withdraw the laws.

On December 1, Pal told his son that he was ill with fever. However, he did not return despite his family’s requests, instead promising to return after the first round of negotiations on December 4. As his health deteriorated further, his family brought him back from the protest site.

The doctors said he had suffered cold exposure and was down with pneumonia. When there was no improvement in his health condition, he was rushed to Ivy Hospital, Khanna, for multi-speciality treatment. Fearing infection of corona virus, he was admitted in isolation ward. He breathed his last on the morning of December 5.

He is survived by three sons and a daughter. Pal’s eldest brother, who retired from the elite National Security Guard as a commando with the Special Operation Group, runs a travel agency along with their other brother, expressed their pain at being called Khalistanis, Naxalites and anti-nationals.

The following words were printed on his kurta, which he wore during protests

In the flesh we are conceived, and in the flesh we are born; we are vessels of flesh.
O religious scholar, you know nothing of spiritual wisdom and meditation, even though you call yourself clever.
जितने कत्ल धर्मों के नाम पर मानव इतिहास में हुए है, अगर उतनी ही कुर्बानियां मनुष्यता को बचाने के लिए दी जाती तो यह इतिहास कुछ और होता। –  शहीद भगत सिंह