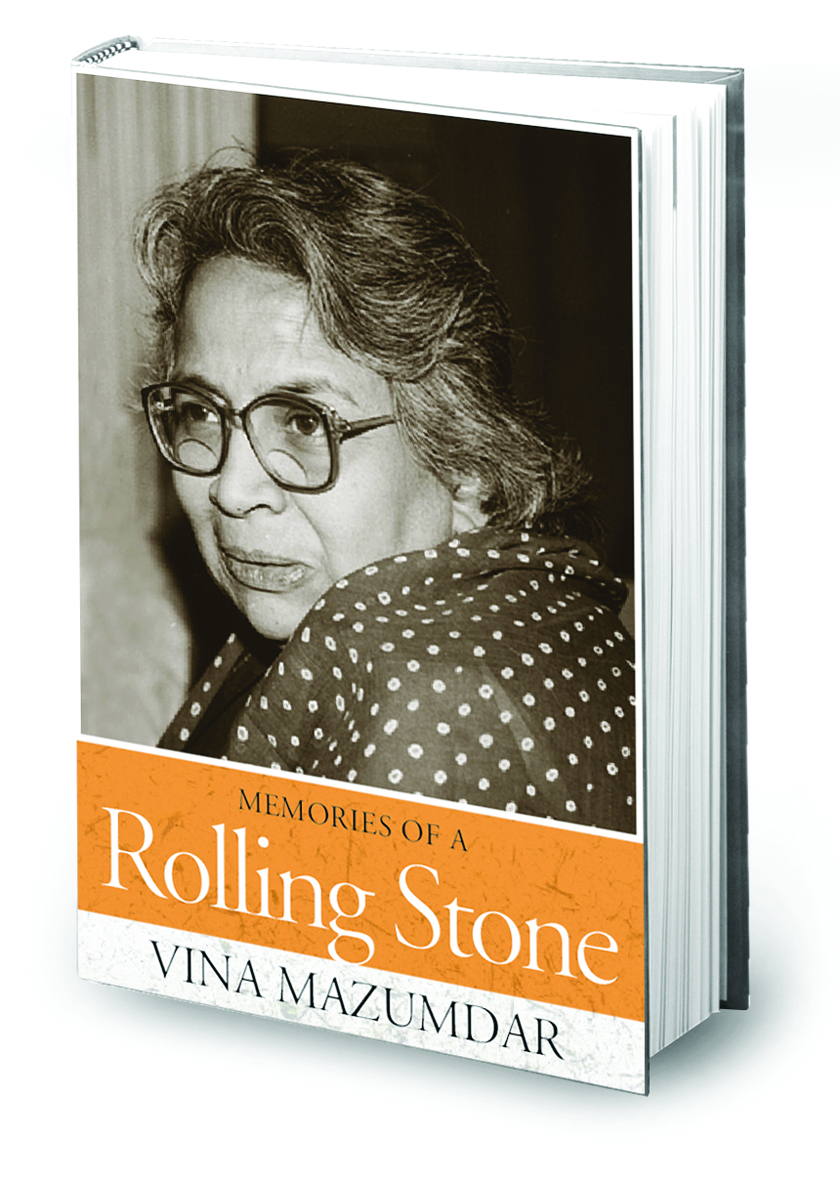 Dr Vina Mazumdar would have been 93 today . A must read is her memoir  Memories of a Rolling Stone is a racy account of “a life well lived.” A liberal upbringing,an organic Kolkata of 1940s,activism and policy making of 60s and 70s,rebellious daughters,singer-husband Shankar and the creation of the iconic Centre for Women’s Development Studies all find exciting residence in the book.

She used to say

It would probably be difficult to fathom an unassuming, soft-spoken, sari-clad lady being a ‘trouble-maker’ but that’s what Vina Mazumdar calls herself. An academician and activist, Mazumdar is also one of the most formidable feminists voices who spearheaded change in the status of Indian women. She rightly addresses herself as the ‘chronicler and recorder’ of the women’s movement in India.

Dr. Vina Mazumdar was one of the first women to be involved in the ‘twin movements’ of Women’s Studies and Women’s Activism. She spent most of her time understanding the diverse experiences of women in the patriarchal system across India. Through her research, she and her colleagues realised that there wasn’t any widespread knowledge about lived experiences underprivileged women, thus leading to the advent of the Centre For Women’s Development Studies (CWDS), in 1980. In 1982, Dr Vina Mazumdar became a founding member of the Indian Association of Women’s Studies (IAWS), which conducts national conferences to promote Women’s Studies, even to this day.

In 1974, Mazumdar published her report on the status of women in India, titled ‘Towards Equality’, which traces the history of women’s movement in India. It essentially laid the groundwork for future movements, critical policy changes, documentation, and government action and accountability towards the women’s movement in India. The report highlighted social, economic, and political discrimination faced by women, and brought into focus the declining sex ratio. It also spurred a major shift in how women’s studies and policy development regarding women’s issues, particularly the economically weaker section, was perceived in India.

In an interview with Paromita Vohra for Livemint, she speaks about how some women are scared to call themselves feminist. “Feminism was associated with people who felt themselves to be discriminated against,” she says. Essentially, this means that those who have not faced marginalisation discredit others’ lived experiences, so evident in the resistance to reservation and special privileges accorded to women.

‘The important thing in equality is dignity, and to that, now we add autonomy. So equality gets further qualified by dignity, autonomy. But that’s why I said Number 1 is justice. The justice has been always there. The demand for justice. That was always there. In the Indian context, political necessity made the faith in human equality, essential. Otherwise, you couldn’t have an Indian nation. That’s it. So democracy was just not a preferred ideology. It was a political necessity. ‘

Some of the tenets of gender equality we take for granted today, like shared responsibilities between husband and wife, the need to eliminate gender discrimination at workplace, and the need for policies around maternity and pregnancy, especially with reference to the work-place were first included in Mazumdar’s report and later adopted by UN too.

Today, this ‘grandmother of women’s studies in South Asia’ may not be among us but the revolutionary work she has pioneered has set the foundation for a better existence for future generations of the average Indian woman.

PRESS RELEASE - The Koodankulam Mystery : Russian Officials’ Anxiety
Fresh MHA advisory to state govts and UTs calls for mandatory, time bound action by police in sexual...
How is journalism different from Lady Gaga NAKED? #Sundayreading
Chhattisgarh: A ‘War without witnesses’ in the making?