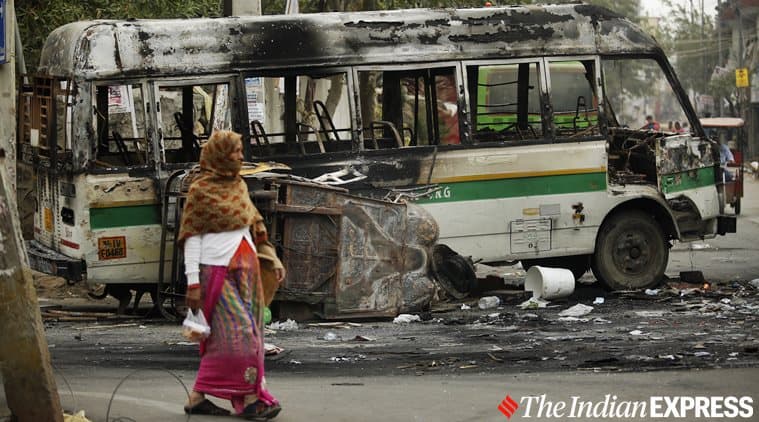 XAt Ghonda Chowk in Jafrabad after the riots. (Express File)

The arrests of “some Hindu youth” from riot-hit areas in Northeast Delhi has led to a “degree of resentment among the Hindu community” and “due care and precaution” must be taken while making arrests, the Special Commissioner of Police (Crime) has written in an order to senior officers heading probe teams and asked them to “suitably” guide the Investigating Officers.

The order comes amid the ongoing investigation, arrests and prosecution by the Delhi Police in a slew of riot cases.

The order says that “community representatives are alleging that these arrests are made without any evidence and are even insinuating that such arrests are being made for some personal reasons.”

The order goes on to name two Muslim men and states: “In the same area, resentment among Hindu community is also reported for alleged police inaction” against the two, “who are alleged to have been involved in mobilising members of Muslim community during Delhi riots and anti-CAA protests”.

“Due care and precaution be taken while arresting any person. All evidences including direct and technical evidences be properly analysed and that all the arrests are backed by sufficient evidence be ensured. No arbitrary arrest should be made in any case and all evidences must be discussed with Special PPs (public prosecutors) assigned for each case,” it states, adding: “Supervisory officers ACPs/DCPs — SIT & Additional CP/Crime (Headquarters) may guide the IOs (investigating officers) suitably.”

The newspaper sent a message to Ranjan asking him about the allegations made by “community representatives,” and whether his order put a question mark on the nature of the probe. No response was received.

In a tweet on April 20, the Delhi Police had written: “While investigating Jamia and NE riot cases, Delhi Police has done its job sincerely and impartially. All arrests have been made based on scientific and forensic evidence.”

Responding to this report, Delhi Police PRO Mandeep S Randhawa has written, saying “Delhi Police is constantly fed with information obtained through representations from members of public and other intelligence inputs from its own intelligence wings and other agencies. It has to take note of these information in an unbiased manner… The news item conveniently ignores the spirit of the order where it has been specifically stated that ‘any arrest’, irrespective of any class, community or religious group,be done on the basis of evidence and not give an impression of being arbitrary… This letter was written only to inform the investigating officers about the representations being received from both the communities and to sensitise and guide them through the investigation of these cases… During the incidents of rioting in North East District of Delhi, Delhi Police has acted in an impartial manner as per provisions of law and the victims were rescued irrespective of their caste and religion.”

The Delhi Police’s contention in there joinder that “the letter was written only to inform investigating officers about the representations being received from both communities” does not find mention in the order, which specifically highlights “resentment among Hindu community” over arrests of “some Hindu youth”.

The Indian Express stands by its report