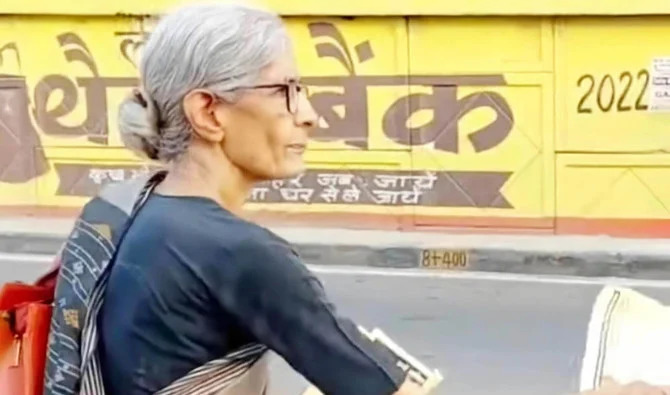 Prof. Roop Rekha Verma distributes pamphlets on the streets of Lucknow, India, in July 2022, calling for the revival of the unity spirit of the 1857 Revolt.

NEW DELHI: When she leaves home in the morning, Roop Rekha Verma carries a pile of leaflets that she will distribute on the streets of Lucknow in the hope of reviving a 19th-century spirit which once united Indians across the religious divide.

Verma, 79, taught philosophy at Lucknow University for four decades and served as its vice chancellor before retiring in 2005.

She is recognized as a major voice against religious fundamentalism and conflict in Uttar Pradesh, a northern state which has made headlines because of the violent attacks against Muslims since 2014, when Prime Minister Narendra Modi’s Bharatiya Janata Party swept to power in India.

“I am deeply disturbed with the way India is deteriorating in every way,” Verma told Arab News. “We have become violence-loving people; it shakes my soul.”

The leaflets she has been handing to passersby and commuters in different parts of Lucknow since July 5 are titled “Break the stick of hatred, love your fellow men.” They are Verma’s attempt to “revive the spirit of 1857” — the year that saw India’s first popular uprising against British rule.

The rebellion, widespread in northern and central India, was particularly fierce in Lucknow and the surrounding Awadh region, where British forces suffered major defeats by an army of Muslim and Hindu freedom fighters before quelling the uprising.

“At a time of mutual suspicion, hatred, violence and distrust, it is important to remember the year 1857 when Hindu and Muslim religious chants reverberated in Lucknow and Awadh,” the pamphlet reads.

“During those days, Hindu, Muslim, farmers, laborers, women and common people belonging to all communities, through their unity and brotherhood, defeated the insurmountable British army.”

Verma hopes her efforts will rekindle unity and stir reflection on the current situation in India, where “division in the name of religion weakens the country.”

Street activism is part of Verma’s “Shared sacrifices and shared heritage” campaign ahead of celebrations marking India’s 75 years of independence next month.

With those who support her, the former academic wants to rekindle a sense of communal fraternity that fueled resistance in 1857 — India’s first war of independence.

“We are making an appeal to people to reunite and rebuild India on the path of progress,” she said. “We have to learn from our own history, which shows the way.”

Sikh Community to March for Sovereignty at UN Headquarters in NYC on June 6th
#India - Tribal land is Eklavya’s thumb, Dronacharya, the State is demanding as the price for ‘devel...
India - Forget food and milk even blood from your blood banks could be adulterated #WTFnews
Muzaffarnagar gangrape: Court representative of victims ‘threatened’ #Vaw #WTFnews