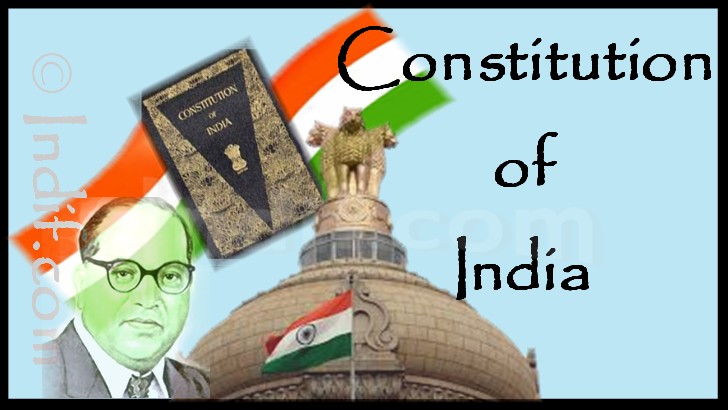 By Rajiv Shah
There was a time when we used to reject the Indian Constitution as “bourgeois”. Those were the student days of early 1970s. Vigorous, youthful, though controversial. At that time, I used to be part of the Students Federation of India (SFI), CPI-M’s student wing. We were told to believe by Delhi University party ideologues that the Constitution served the bourgeois-landlord state, led by the big bourgeoisie, which was in alliance with the imperialists.

I don’t know about others, but surely, I didn’t understand much of it. Everything, including Premchand’s novels, would be seen within that framework. One of the ideologues, Sudhish Panchari, truly an incisive Hindi critic, I recall, said how should one see “Godan” within the framework of bourgeois-land government (and all that) addressing a seminar in Jamia Millia Islamia.

I would take it all with a pinch of salt, but had no idea how to question it. At that time we hadn’t read (even less understood) Dr BR Ambedkar on how he had played a pivotal role in coming up with India’s Constitution. All that we were supposed to know was, Ambedkar, like Nehru or Sardar, supposedly played in the hands of the ruling classes. To Ambedkar, we were made to believe, caste struggle was more important. And, as caste conflict divided the proletariat and eroded class struggle, Ambedkar ought to be rejected.

I am reminded of this (and more) when I find today’s CPI-M leaders, who were my contemporaries in SFI in 1970s (not excluding current party general secretary Sitaram Yechury, or his predecessor, and “rival”, Prakash Karat), valiantly defending the Constitution, arguing out how it is sought to be undermined by the present BJP rulers through the Citizenship Amendment Act (CAA), National Population Register (NPR) and the National Register of Citizens (NRC).

The very same Left leaders’ followers in the Jawaharlal Nahru University (JNU) are currently found keeping high the spirit of the Constitution and the tricolour (and not the red flag, as was the case in early 1970s) against an alleged Right-wing onslaught, which is challenging not just the “Constitutional values” of equality before law by favouring Hindu majoritarianism, even as seeking to reduce the minorities into second class citizens.

They are also opposing the saffron rulers’ assault, often violent, on anti-CAA-NPR-NRC protesters, leading to the death of at least two dozen people, pointing towards how the clampdown is against the Constitutional provisions relate to freedom of speech and association, and how Section 144 prohibitory orders are imposed anywhere and everywhere to facilitate the clampdown.
Interesting, if in early 1970s it was the Left, as I knew it, which had sought to reject the Constitution, dubbing it “bourgeois”, now things seem to come full circle: Surely, right-wing leaders — Narendra Modi and Amit Shah — haven’t yet come out in the open, questioning the Constitution. But his die-hard followers surely have.
Considered by a sectio

n of by saffronites “a leading thinker on constitutional matters”, R Jagannathan, currently editor, “Swarajya Magazine“, called the “conscience keeper” of the right, from all appearances, is certainly not that.
This senior, and perhaps one of the best Right-wing journalists, who is more at ease when he focuses on economy — he has held senior positions in “Forbes India”, “Financial Express” and “Business Today” before joining the news portal “First Post” as its editor — has triggered Horner’s nest by declaring the need to throw out whatever is not India (I think he meant Hindutva) in the Constitution.

Reacting to a recent tweet — which said, “A decade or so ago read the Constituent Assembly debates with great awe. Redoing it now. Frankly looks like they were a confused lot to me now. We deserved better ideas and debates” — Jagannathan asserts, “Absolutely. It is time we told it like it is. Our Constitution is a huge tome of contradictory things and borrowed ideas focusing less on principles and broad approaches. There is nothing Indian about it.”

No sooner I saw the tweet, I recalled a lecture by one of India’s foremost veteran Constitutional experts, Upendra Baxi, who, while addressing an august audience in Ahmedabad, talked of what he called “foolish excellence” in the context of the Indian Constitution. Baxi’s lecture, even as demanding unusual academic erudition from the audience — it contained umpteen number of references — appeared, at least to me, to question mark exactly what the Left had just refused to.

I am not sure, what Baxi said would sound music to Jagannathan and others in the Right-wing, who have now discovered that the Constitution should be overhauled because there is very little Indianness (sic!) in it. Also, I don’t know if the Left would at least now see a major deficiency Baxi appears to have identified in India’s Constitution — of neglecting human rights and social justice.

Titled “The Directive Principles of State Policy, Fundamental Duties of Citizens, and Human Rights: Fools Rush in Where Angels Fear to Tread”, Baxi sought to “suggest” during the 45-minute lecture that India’s constitution-making “preceded at least by six decades of the Indian freedom struggle”, which ushered in a new India, “an era of foolish excellence.”

Wondering as to why human rights and justice are mainly a part of the Directive Principles of the State Policy, which are legally not enforceable but are merely a moral binding, Baxi indicated, very few duties related to human rights and social justice have been made legally obligatory for the state in the Directive Principles, one of them being making the Right to Education (RTE) compulsory, which, by the way, is a more recent development (2009).

Baxi suggested, 90% of the emphasis in Constitution is on governance and development, while only 10% is on human rights and justice

Searching on the web, I found that, a little less than four years ago, Jagannathan appeared to consider human rights and social justice as needing more importance in the Constitution than hitherto has been the case, even though, not unexpectedly, he also wanted to throw away a lot of things he seemed to consider as not giving justice Hindus. Interestingly, in this 2016 article, he does not utter a single word about the Constitution’s supposed non-Indianness.

Defending Dr BR Ambedkar (Jagannathan gave full marks to Ambedkar, stating, “Ambedkar would probably not recognise the constitution we have now”, as it has been “constantly” tinkered with populist reasons, hence it has been “beaten … out of shape”), ironically, in the article, he insisted that the “first and foremost change that needs to be made is to make fundamental rights stronger.”

According to him, “We did the opposite. We have whittled down rights repeatedly, starting with Jawaharlal Nehru’s first amendment to curtail free speech, by inserting needless restrictions to it.” The eight “limits” to free speech prescribed by the first amendment include, he said, are “security of the state, friendly relations with foreign states, public order, decency or morality, or in relation to contempt of court, defamation or incitement to an offence.”

“At least four or five of these restrictions are redundant: barring sedition, contempt of court, or incitement to violence, most of the remaining restrictions can go”, he said, adding, one of the fundamental rights that needs restoration is the right to properly, taken away by the Janata Party government in 1978. In 2016, he also wanted to “protect the fundamental rights of citizens with different personal preferences”, junking Section 377 of IPC, “which criminalises gay sex” — which is surely not an “Indian” view

#India- Not to miss: Modi sir's history class #mustread #Feku #Namo
Maoist leader Narayan Sanyal released from jail
Shahid Azmi's Murder -' They didin't kill my son , But also Humanity '
Forest Rights Act is being diluted. What does that mean for millions depending on forests?