#RIP Activist, Feminist and Friend Trupti Shah- Her life in her own words 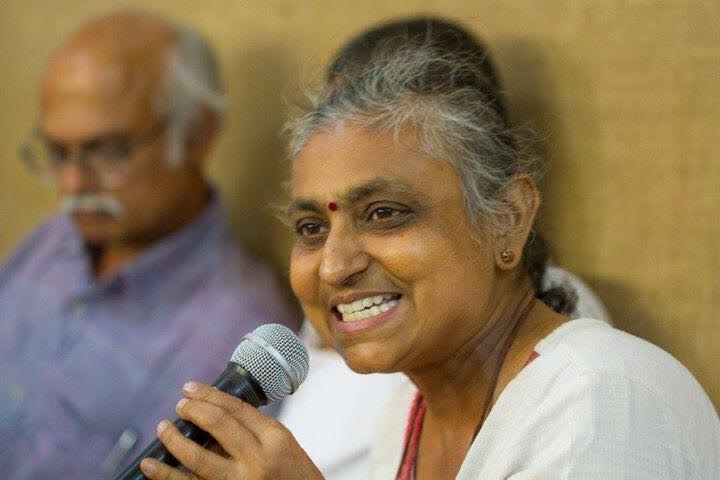 Trupti Shah, Friend ,feminist, environmentalist, human rights activist is no more with us. She left us at 9.15 p.m. May 26, 2016. She battled lung cancer that was detected in October 2014. We could not honor her last wishes to donate her body to the hospital as SSG Hospital authorities refused to accept due to her critical illness

Read her life story in her own words for Zubaan Poster Women Project, dt July 25, 2011

As daughter of the father involved in the Social Movements and a mother involved in the Social Service activities, I was introduced to various Social Movements in my childhood. I inherited the Gandhian spirit, “not to tolerate any injustice” from my father who gave up his career as a journalist to became a Marxist-Trotskyist and Trade unionist. Along with him and other younger comrades from the Communist League, a Trotskyist group, I witnessed and participated in most of the major movements that emerged in Gujarat in the 1970s. My involvement in the women’s movement has its roots in these experiences.

In 1973, a dynamic Anti-Price rise movement emerged in Vadodara. Thousands of people, particularly women, participated in protest programmes. In one such programme, against the price hike of Milk, we stopped all the vehicles at the gate of Baroda Dairy that distributes milk in the city. As an 11 year old girl,, I got arrested along with few other minor girls and kept in the remand home (state home for children) for three days. That was my first experience of the Mass movement. Nav Nirman Andolan and anti emergency agitations were to follow in the subsequent years.

When the nationwide movement for reopening the Mathura Rape Case and demand for changes in the Rape Law was started, a forum called Narishoshan Virodhi Samiti was initiated in Vadodara. As the movement gained momentum, even the political parties and traditional women’s organisations at the local level joined the forum. As a young girl, it  upset me, the way the seasoned women leaders of the political parties and traditional women’s organisations were dealing with the issue of rape which was a very emotive issue for me as a teenaged girl. I was disappointed by their petty politics and constant inner currents to dominate the group.

I attended the first conference of Autonomous women’s movement organised in Bombay in 1980. I could feel the stark contrast in the way of functioning, the concerns and almost every thing between the Autonomous women’s movement and the local forum – Nari Shoshan Virodhi Samiti – in Baroda. Unable to articulate my observations and feelings I declared in the last plenary session of the conference that, “we need more young blood, young girls’ in our organisation in Baroda.” This was a hilarious move as I was perhaps the youngest delegate in this national conference.

This was a turning point in my life. A decision was made, ‘there is a need to have an autonomous women’s organisation in Baroda which will uphold the interest of women above all other issues and political affiliations.’ And rest of the life became a persistent effort towards building such an organisation.

It took several years of efforts along with like-minded friends, students from the Maharaja Sayajirao University of Baroda to initiate the  Sahiyar Stree Sangathan in 1984. The consciousness of the secondary status of women through our experiences of women at home and in the public sphere and the influence of the autonomous women’s movement were two important factors that had strengthened our urge to start an organisation by women and for women with the long term aim to work towards a society free from inequality, injustice and atrocity – a society whose women enjoy equal status and recognition as human beings.

Since then, my involvement in the women’s movement is a collective effort as part of Sahiyar. Our struggle was not only against gender based inequalities but against all forms of inequalities and hierarchies based on class, caste, religion, ethnicity or culture.

Campaign against rape and sexual harassment by powerful has remained one of our major concerns over the years. The first major campaign that we undertook was against a gang rape on a tribal woman by police in the police station of the Sagbara tribal area of then Bharuch District in 1986. Reading in the newspaper the denial by the DSP about the charges enraged us. The information from the local organisation from the tribal area to us and other Human Rights group was contrary to the claims by Police. Our fact finding report in this incident became a base of a mass movement in that tribal area launching CBI inquiries in cities like Vadodara. This campaigned sharpened my understanding of  rape as defined by the intersection of gender, caste and class as we were constantly arguing against the myths about rape with the media and even our upper caste, middle class supporters who had Brahmnical patriarchal understating about the “character of a poor tribal women”. This was one of the very few cases in the women’s movement in which culprits were punished and the woman got compensation.

The Harivallbh Parikh case (1996), The case of a girl raped in a Ashram shala in Chhotaudepur area become important as due to our efforts the case became known in the name of the accused as ‘Harivallbh Parikh case’ and not by the name of victim. This time we were not only up against upper caste, class myths as by that time rape had became an issue to achieve various political and sectional gains. The dichotomy of BJP vs. Congress and the supporters of  Narmada Dam vs Opponents was muddled with this issue.

The campaign against violence on women in the family like dowry death, domestic violence and sex selection have remained a consistent struggle to be fought every day in individual cases as well as demand for laws, implementation of law and constant vigilance on the implementing machineries for us. Campaign against Sex Selection have always remained close to my heart as I felt that it was an ultimate sign of rejection of my existence as a girl/woman. As we were clear that our struggle is against discrimination against women and girls and we are ‘for’ the right to abortion, we were able to keep a safe distance from the religious and rightwing forces that attacked abortion as foeticide as our own messages were some times pervaded by the idea that a foetus has the right to be born. A visual from an unknown artist became a symbol of our slogan ‘Let the daughters be born, blossom and reach out to the sky.’ (see visual no.3)

We have always resisted fundamentalists and communal forces right form the inception of Sahiyar. Our first action against communalism was in 1985 when the anti reservation agitation of the middle class youth turned in to communal violence. Along with other likeminded groups we organised a Street Play Festival in the riot affected areas of Baroda.

In the 1990s, due to the increase in the dominance of communal forces in social and political spheres we had to face direct confrontation form them. The first such physical confrontation was in September 1990 on the occasion of Ganesh Visarjan (immersion ceremony) when Vadodara saw the worst-ever riots. Our activists were prevented to distribute leaflets. Subsequently on the 8th of March, International Women’s Day, Akhil Bhartiya Vidhyarthi Parishad (ABVP) was mobilised to organise a counter rally on the same place and time as ours, though they have never celebrated International women’s Day in the past. We carefully planned our strategy to counter this confrontation and mobilised large numbers, about 1000, from our supporters, trade unions, cultural organisation and all other progressive organisations and people with whom we had worked during communal riots. This was not expected by the ABVP and they did not dare to physically attack us. About 100 of their members passed by the place of the  programme and organised their meeting in a nearby place. This strategy of offensive response towards right-wing forces while keeping faith in ordinary people has been used by us again and again in post 1992 riots and in 2002.[1]

Our understanding about the linkages between all the issues affecting women’s lives, emerging form their multiple identities and the need to address them have led us in getting involved in the entire gamut of issues and the struggle for women’s rights and Human Rights. In the initial years, the focus of our activities was more on general public awareness and our role as a pressure group. Now, our added focus is on area-based awareness and training, supporting grassroot women as community leaders to deal with their issues as a woman, as a member of a particular community and as citizens.  We have realised the need to have our base in areas to eventually become an organisation rooted among people.

The issues and challenges are becoming more and more complex. At a macro level the combination of rising rightwing forces and marginalisation of people due to economic policies have generated newer forms of patriarchal oppression of women and the age old issues have also become more complex. For example; any incident of sexual violence does not just remain a women’s rights issue. It is  the involvement of all kinds of forces to take advantage of it that turn it into a communal issue, a caste issue, an issue for inside and outside migrants and all other hierarchies that exist in the society. It is not easy to have an alignment with the right kind of forces. We need to understand all the hierarchies along with gender while taking sides.

The struggle to survive as a movement and not get trapped in Institutionalisation as an NGO is difficult but not impossible. While networking on issues at the state or the national level, we have experienced that the movement turned into projects and campaigns are constrained by funding. Young activists prefer to turn to well paid NGOs instead of movements. In such circumstances, we have been able to survive without big funding and FCRA for more than 25 years. Whenever we felt an urgent necessity to take up any issue in the face of happenings in the society, we were able to generate resources as we had developed a capacity to work with fewer financial resources. At the same time, this gives me optimism in the times of increased cost of living and changes in the working style. The question that arises now is that what are the options available to young activists? I feel we need to create a sustained platform where activists can gather beyond projects, beneficiaries, targets and lists of achievements or success stories to address the issues we feel are important and find out innovative ways to challenge the patriarchal system as interwoven with all the forms of hierarchies without being constrained by the funding.

[1] For a detailed account of sahiyar’s work against communal and fundamentalist forces please see, “ Religious Fundamentalisms and Communalism: The Case of Sahiyar, by Trupti Shah in the anthology published by AWID, linkFeminists on the Frontline: Case Studies of Resisting and Challenging Fundamentalisms