RIP Mubarak Begum, One of the Last Links With Hindi Cinema’s Golden Era 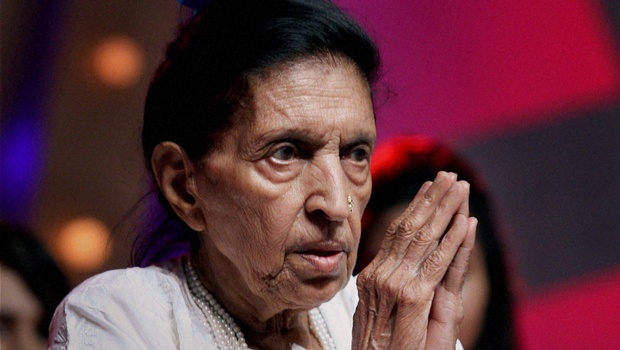 With the death of Mubarak Begum in Mumbai at the age of 80, the last of the ‘Muslim’ voices from the Golden Era of Hindi cinema has gone. Though she came much after them, she was in the long line of singers such as Zohrabai Ambalewali, Amirbai Karnataki, Noorjehan, Shamshad Begum and the queen of them all, Suraiya.

She is known to have sung in 1949 for ‘Aaiye’ and through the 1950s and ‘60s, came to be known for many hits such as Woh na aayenge palat kar (Devdas), Be murrawat bewafa (Susheela) Hum haal-e-dil sunayenge (Madhumati) and Hamari yaad aayegi (Hamari Yaad Aayegi) which became her signature song. To her fans, her bhajan, Devta tum ho mera sahara (Daera), a duet with Mohammed Rafi, remains a pinnacle of technical accomplishment.

Though Mubarak Begum gave up playback singing almost four decades ago she occasionally would perform at live events. But even that became difficult, and her poor financial condition was occasionally reported in the newspapers. Fans and friends used to send her money and the state government had given her a small flat from the artists’ quota, but it was never enough.

The ‘Muslimness’ in her voice, as that of the others before her, is not so much a reference to her religion than to a particular kind of tone and texture and style – a lahja – that all but vanished from Hindi films from the 1950s onwards.

After Independence, Lata Mangeshkar, who herself had sung in the manner of Noorjehan early on, emerged as the leading voice of Hindi cinema and the others gradually fell by the wayside. Noorjehan moved to Pakistan and while Suraiya and Shamshad Begun continued to sing, Lata Mangeshkar was emerging as a favourite of composers and fans alike. Noorjehan was earthy and sensuous, Suraiya rich in tone and Shamshad Begum robust but Lata’s singing was imbued with crystal-like purity that had universal appeal and what is more, she was technically excellent. It is said that Lata Mangeshkar had a ‘neutral’ voice that sat well on the typical Hindi film heroine who had to appeal to pan Indian sensibilities as the typical, ‘good’ Indian girl. Thus her voice became the template; everything else was a variation that could only work in some cases.

A good example was that of Geeta Dutt, whose smoky sexuality was much loved by music directors in the 1950s. S D Burman and O P Nayyar used her in several films, but the first eventually returned to Lata Mangeshkar while the second, who had had a fight with Lata turned to her sister Asha Bhosle. Curiously, it is Asha Bhosle who then became the alternative voice – the ‘non-Lata” – seductive naughty and fun as the situation required, often emotions Lata didn’t want to or couldn’t fully manage.

Mubarak Begum’s golden voice carried the unmistakable dard that imbued her singing with sensuality and melancholy in equal measure. Not surprisingly, she was used repeatedly for mujra numbers, which clearly ruled her out as a playback singer for the lead actresses, who would have found her too outré.

Begum herself used to say she lost out because of political machinations and conspiracies in the film industry and therefore remained under-utilised. Songs that had been recorded by her were suddenly cast aside and sung afresh by other leading singers. She gradually faded from the scene, but has millions of fans who enjoy her memorable songs even now.

Begum Mubarak is survived by her son Hussain, daughter-in-law Zarina and granddaughter Sana with whom she was living for many years.

Here are five of her most famous songs