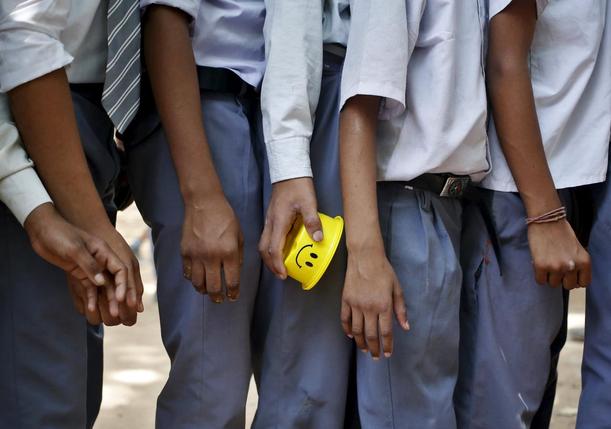 A student holds his tiffin box while standing in a queue to receive free mid-day meal being distributed by municipal workers at a government school in New Delhi, India, May 6, 2015.
REUTERS/ANINDITO MUKHERJEE

As Prime Minister Narendra Modi completes one year in office, his cuts in federal welfare spending on the poorest of India‘s 1.25 billion people are coming in for sharp criticism, including from within his cabinet.

In a break with India’s socialist past, Modi has saved money on federal social and subsidy expenditure and pumped it into an infrastructure stimulus he hopes will trigger a spurt in economic growth.

The government says lower welfare spending will be compensated for by giving state governments a larger allocation of tax revenues to spend as they choose. But state chiefs, government officials and a cabinet minister have warned that the spending shakeup endangers the country’s most vulnerable.

Maneka Gandhi, women and child development minister in Modi’s cabinet, has said the impact of the policy will borne by India’s estimated 300 million poor.

“This may result in a situation where the focus is lost on critical programmes related to malnutrition of children … nutrition for pregnant and lactating mothers,” Gandhi wrote in a April 27 letter to the finance minister, a copy of which was seen by Reuters.

“I am afraid to point out that political fallout of such a situation can be grave.”

Those warnings have been echoed privately by at least three impoverished states who say they are being shortchanged.

In his first full-year budget, approved by parliament on May 7, Modi halved funding for a scheme that gives millions of poor children free food and drastically cut allocations to make clean water available in rural areas.

On the other hand, funding for roads and bridges more than doubled and is now higher than the sum allocated to education.

The cuts to nutrition and water stand out because of the precarious condition of India’s poor. Four of 10 stunted children in the world are Indian, more than sub-Saharan Africa.

In 2013, the country recorded 50,000 maternal deaths. About 1.5 million children die each year before the age of five.

His approval ratings remain high, although he faces growing headwinds in the countryside, where bad rains and low crop prices have affected the 70 percent of the people that live there. The fear is that the spending squeeze will hit when the most vulnerable need more help.

Modi’s gamble is that infrastructure investment will generate dividends for the poor in time for the next general election by increasing the economy’s capacity to grow through better roads, ports and railways.

At the same time as taking away central funding, Modi has increased the share of taxes given to states to 42 percent from 32 percent, money that, if well spent, can cover the shortfall from the spending cuts.

The policy shift is championed by economists in a new body called Niti Aayog, or policy commission, Modi’s replacement for the Soviet-style Planning Commission set up by post-independence leader Jawaharlal Nehru.

It is headed by Columbia University’s Arvind Panagariya, who advocates fiscal stimulus to invest in infrastructure and restore growth, and rely on the growth to later finance health and other social spending.

One senior government official aware of the strategy said his main priority this year was to find ways to efficiently spend the ramped-up rail and road budgets.

“This has an element of risk because it is not clear how effectively this stimulus can actually be delivered on the ground due to leakage, weak capacity, and so on,” Vaishnav said.

Junior Finance Minister Jayant Sinha said the emphasis was on the supply side so the rural economy grows without overheating, but denied programmes were being cut.

He pointed to increased funding for a rural work scheme that was a flagship of the last, left-leaning government.

“Yes, there are certain programmes where we have had, from the central side, a reduction,” he told Reuters. “But that’s because we are going through a reset of the fiscal architecture,” he added, referring to states’ increased share.

States will this year receive about $28 billion more taxes, while the cuts reduce support to central programmes run by states by about $18 billion, according to the Centre for Budget and Governance Accountability.

While that’s an overall gain of $10 billion, poorer states who rely more on central support say they face net losses.

Naveen Patnaik, chief minister of the impoverished state of Odisha, lodged his protest in an April 29 letter to Modi, saying the new policies put a burden of $335 million on Odisha, a cut that is “beyond its means”.

“The loss … is not going to be set off by the 10 (percentage point) increase in devolution,” he wrote. “This will have an adverse impact on the social economic development of some of the most vulnerable and backward regions of the country,” he said in the letter seen by Reuters.

Officials from the health ministry shared his concerns, telling a parliamentary panel that the budget will have a “major impact” on plans to provide free medicine and strengthen clinics.

“Past experience shows that if spending is left to the states…(health) will take a back seat,” the panel said in its report.

Health Minister J.P. Nadda has publicly denied a shortfall in the health budget.

“Health workers don’t come to our village, there is no government help,” said Ayat Mohamad, from the state of Haryana, waiting with his undernourished nine-month-old grandson at Delhi’s federally-run Kalawati Saran hospital.

The hospital is filled with children from rural areas suffering from malnutrition worsened by poor hygiene.

Brand India: how loudly can it lay siege?
Bhopal Encounter Protest- 15 detained for protest including a lawyer
Triple divorce is neither fundamental to Islam, nor is it sacramental
Texas- Hunger-Striking Immigrant Mothers Faced Retaliation