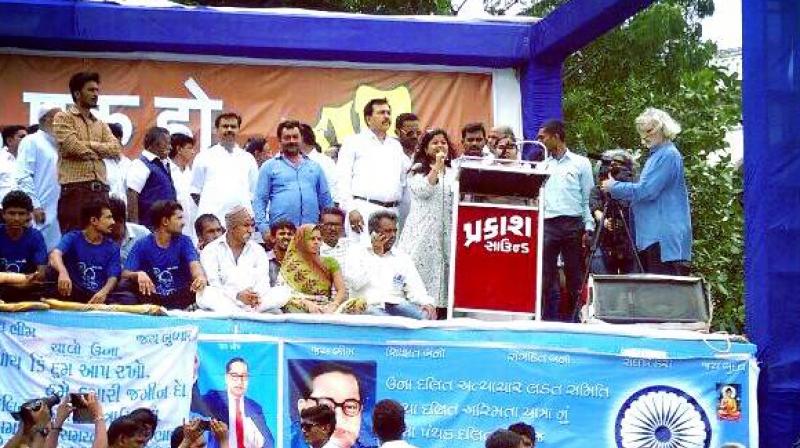 A 350-kilometre march undertaken to protest the flogging has attracted thousands of Dalits every day. (Photo: Facebook)

Una (Gujarat): Radhika Vemula, the mother of Rohith Vemula, the PhD who committed suicide at the University of Hyderabad campus in January, unfurled the national flag on the grounds of a large state-run school in Una, Gujarat.

The protest gathering at Una is the culmination of a 10-day march that saw people join from all corners of India to mark their protest against rising atrocities on Dalits.

There have been large-scale Dalit protests in Gujarat over the last few days, after four Dalits were tied to a car, stripped and flogged for allegedly killing a cow last month.

A 350-kilometre march undertaken to protest the flogging has attracted thousands of Dalits every day.

On Monday, a leader of the movement said that Dalit people will launch a rail blockade in a month if the state government doesn’t accept their demands that include five acres of land for every member of the community.

“We demand a discussion on land allotment for Dalits in the Gujarat assembly on August 22-23,” said lawyer-turned-activist Jignesh Mewani, according to reports.

Mewani added that if Patidar agitation leader Hardik Patel could go to jail for seven months, he was ready to be imprisoned for 27.

“You have exposed the Gujarat model of development,” Kumar said to the crowd.

“We want freedom from casteism. We will not tolerate any more atrocities on Dalits anywhere in the country. Everybody has to come together to fight against such atrocities.”

The Bharatiya Janata Party (BJP) government in the state has been shaken by the incidents and Dalit agitations. This is being cited as one of the prime reasons why Anandiben Patel resigned from the Chief Minister’s post earlier this month.

Muslim community members came in large numbers to support the Dalit community in their campaign. Slogans like “Dalits-Muslims bhai bhai” were heard at the gathering.

Meanwhile, Prime Minister Narendra Modi, who on Monday delivered the Independence Day address to the nation from the ramparts of Red Fort, has reached Gujarat to pay respects to to Swaminarayan sect’s spiritual head Pramukh Swami, who died on Saturday evening