The RSS and the BJP have tried to stoke fears about Hindus being swamped by Muslims. 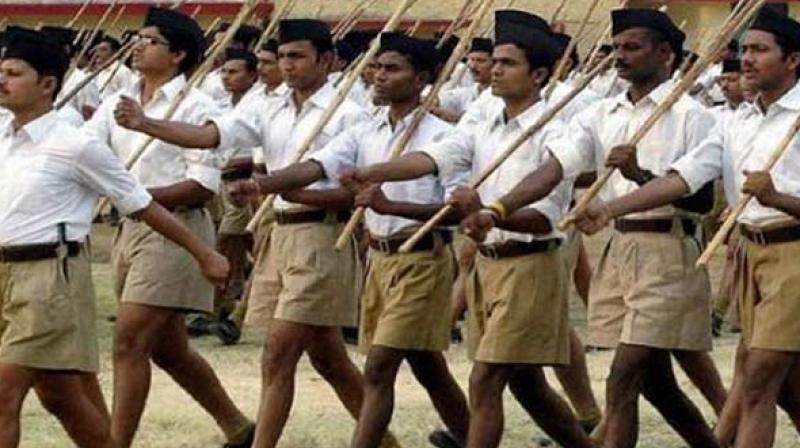 The Rashtriya Swayamsevak Sangh is riding its old hobby horse again. Addressing the Yuva Dampati Sammelan attended by reportedly 2,000 young couples organised by the RSS’ Kutumb Prabodhan in Agra on August 21, RSS sarsanghchalak Mohan Bhagwat, apparently concerned about the “declining Hindu population”, exhorted young Hindu couples to have more children. He asked, “Which law says that the population of Hindus should not rise? There is nothing like that. What is stopping them when population of others is rising? The issue is not related to the system. It is because the social environment is like this.” The apparent provocation for this is in the Census 2011 findings: “Population growth rate of various religions has come down in the last decade (2001-2011). Hindu population growth rate slowed down to 16.76 per cent from previous decade figure of 19.92 per cent, while Muslims witness a sharp fall in growth rate to 24.60 per cent (2001-2011) from the previous figure of 29.52 per cent (1991-2001).”

According to Census 2001, Muslims accounted for 138 million, or 13.4 per cent. But in 2011 that share rose to 14.23 per cent, or 172 million. But even if they are, is it a cause for worry? Are Indian Muslims not Indians like others? Unfortunately, this basic question seems out of place in the current discourse. Not surprisingly, the RSS and the BJP have tried to stoke fears about Hindus being swamped by Muslims. That, of course, is a ridiculous notion for let alone present trends continuing, the population growth of all groups in India will cease about the end of this century. It has been calculated that even if present trends continued it would take 247 years for Indian Muslims to catch up with Hindus in terms of numbers. It’s not as if the RSS is not capable of getting its maths right, but logic is not the issue here.

Most demographers project that India’s population growth will taper off around 2060. But the growth of population in the bimaru belt will continue till 2091. This rather appropriate acronym BIMARU stands for Bihar, Madhya Pradesh, Rajasthan and Uttar Pradesh. Muslim growth will also level off about then, by which time they will constitute a good 18.8 per cent of India. But what should be a matter of concern is the consequent implication that if the bimaru population keeps growing till near the end of the century, then the proportionate populations of other regions will actually be contracting. This may have even graver political consequences. But this does not seem to concern the Sangh Parivar, which seems only perturbed about Muslim fecundity.

In 2020, India will have more than 270 million people in the 15-35 age segments, when productivity and economic contribution is the highest. If savings rates improve and with productive potential at its peak in 2020 and we will have a great window of opportunity to make it as a developed and prosperous economy by 2050, if we are able to educate and empower the masses. Such a demographic constellation will never appear again. It’s just too bad our leaders are preoccupied with their individual constellations and not the nation’s.

There are other trends, some disquieting, also visible now. The foremost of these is the sharp increase in the number of agricultural labourers. This is the classification reserved for “the poorest of the poor”. Their numbers have risen to 144.3 million in 2011, posting a decadal growth of 34.23, while the number of land-owning cultivators have decreased by nine million. This is a severe indictment of the policies pursued in the decade after the so-called liberalisation. The entire spectrum of political power has held office during the last two decades.

Naturally, we will see no fingers pointed inwards. Muslims are generally poorer than Hindus. Poorer people have more children. And quite clearly there are other segmental factors impacting population growth. Literacy levels of both rural and urban Muslims are lower than Hindus, but not by much. Perhaps what is more significant is that more than twice as many uneducated Hindu women are employed than similarly disadvantaged Muslim women — 44 per cent compared to 18 per cent.

According to the National Sample Survey Organisation, there is a wide spectrum of household incomes for communities. At the two ends are Sikhs and Muslims. The average monthly per capita expenditure of a Sikh household in 2010 was Rs 1,659 while that of a Muslim household was Rs 980. The average expenditure for Hindus and Christians were Rs 1,125 and Rs 1,543 respectively. There is no significant difference between the average rural Muslim and Hindu by household monthly per capita expenditure, which are Rs 833 and Rs 888 respectively. But there is one area where Muslims fare much better. More than half of the Indian population, over 600 million people, defecate in the open, without the use of a latrine or toilet. The prevalence of open defecation is particularly high among Hindus. Data from the most recent wave of the National Family Health Survey shows that as of 2005, 67 per cent of Hindu households defecate in the open, e.g. in fields, near streets, or behind bushes. In comparison, only 42 per cent of relatively poor Muslim households do so.

This is not without consequences on population growth. In India, Muslim children are substantially more likely than Hindu children to survive till their fifth birthday, despite Muslim parents being poorer and less educated on an average than Hindu parents. This phenomenon, which has been well documented and reveals that by age five, mortality among Muslims is about 18 per cent lower than among Hindus, with an additional 1.7 children per 100 surviving till the age of five. Clearly if Hindu infant mortality improves, its population growth will get closer to the Muslim rate. Fittingly, it seems that how Hindu population growth shapes up depends much on how many of them take to the Prime Minister’s Swachchh Bharat campaign to build more toilets and encourage their use. The RSS has its work cut out.