DECCAN CHRONICLE. | SANJAY BASAK
In her new book, Thapar has said that nationalism cannot be reduced merely to shouting slogans. 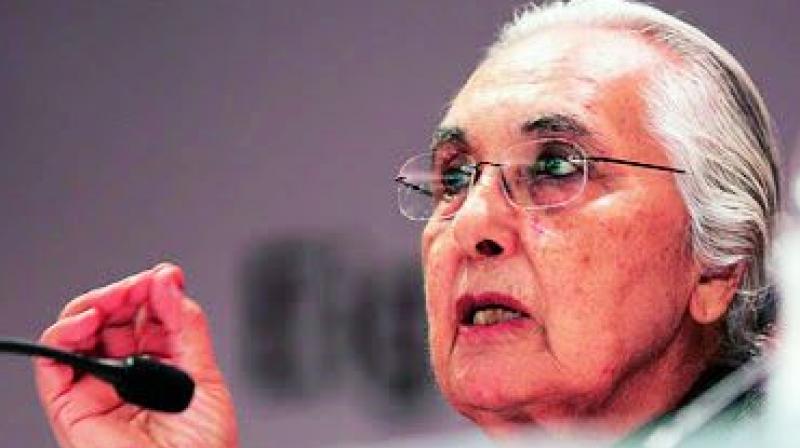 New Delhi: Historian Romila Thapar is under attack yet again by the big brother of the Sangh Parivar — RSS.  This time the RSS is breathing fire on her latest book — On Nationalism.

In her new book, Ms Thapar has stated that nationalism cannot be  reduced merely to waving flags and shouting slogans and penalising people for not shouting slogans like Bharat Mata ki Jai.

Seething over her observations, the RSS mouthpiece, Organiser, which described Ms Thapar as “queen bee of highbrow intellectualism of divisive Left,” targeted her saying, “Thapar is far from surprise to those who understand the phoney communist character of her intellectual politics.”

Targeting the latest brand of nationalism, Ms Thapar said, “Sloganeering or flag waving smack of a lack of confidence among those making the demand for slogans.”

Of course this has gone against the nationalist spirit of the Sangh. The mouthpiece said, “This time, she has produced another stinky logic of provincialising the otherwise wide-ranging cultural nationalism or Hindutva.”

Hitting out at Ms Thapar, the Organiser wrote in its cover story — Nation for Naysayers — “In the post-Independence era, historians like Thapar were nurtured by the Congress and were established as intellectuals only to ensure that they echo the political programme of this power mongering party through their divisive theories and intellectual activism so that the most legitimate cultural interests of the Hindu society gets nullified from general cognizance.”

Ms Thapar in her book which is a compilation of essays by Thapar, lawyer A.G. Noorani and cultural commentator Sadanand Menon, has said, “In India we distinguish between secular anti-colonial nationalism that was the mainstay of the national freedom movement and the other movements that called themselves nationalism but were doubtful as such and were correctly religious or communal nationalism that drew their identity from individual religions, such as Muslims, Hindu and Sikh nationalisms.”http://www.deccanchronicle.com/nation/current-affairs/210816/rss-fumes-over-historian-romila-thapars-new-book.html