RSS hoardings which called Dalits ‘untouchable’ brought down after protest 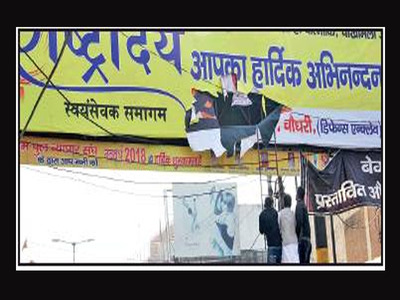 Talking to TOI, RSS leaders explained that the statement mentioned in the hoardings was part of a speech BR Ambedkar gave in 1927, but the hoardings did not attribute it to Dalit icon. Ajay Mittal, RSS prachar pramukh for Meerut Praant said, “The statement mentioned on the hoardings was actually first spoken by BR Ambedkar when he led a protest for allowing entry of Dalits to Amba Devi temple in Amravati in 1927. This statement is a part of Ambedkar’s biography written by Padma Bhushan awardee Dhananjay Keer. The only mistake was that the statement was not put in inverted commas and not attributed to Ambedkar, although his photograph is present on the hoarding. Because people have little understanding of this matter and their sentiments have been hurt, we have given instructions to take such hoardings down.”

About 20 of hoardings brought down after Dalits said the wordings were “derogatory and a means to show Dalits were inferior to upper castes”. Some of the hoardings about the congregation have featured Valmiki, Ravidas and 14th century poet Chokhamela.

“Chokhamela, Ravidas and Valmiki are sacred to different communities of Dalits. How can anybody call them untouchable, that too in a public hoarding? The sentiments of Dalits have been hurt and if these hoardings are not taken down with immediate effect, we will protest against the RSS event that is set to take place on February 25,” said Vipin Manothia, Dalit leader and UP state vice president of Bharatiya Safai Karamchaari Mahasangh. Dalit leaders stood atop a bus right below a hoarding and tore it up.

Holy cow! Push to outlaw beef in India seen as cultural oppression
Hundreds gather in support of Irom Sharmila- but media is more interested in who shunned her
How the "Pro-Life" Movement Puts Women Behind Bars
Odisha- Gram sabha ball set to roll for Vedanta bid to mine at Niyamgiri Hills