An RSS thinker has become a subject of social media ridicule after he astonishingly claimed that Delhi’s Jama Masjid was in fact a Yamuna Temple. His crazy claims did not stop here. He also went on to suggest that the Taj Mahal was not built of Shah Jahan, but the historic monument was built in the 11th century by a Hindu king.

Desh Ratan Nigam, who’s also a lawyer by profession, was taking part in an NDTV debate show, Big Fight. His wierd claims caused huge laughter among the audience with the show’s host, Vikram Chandra, holding his head in utter disbelief. Among the other panelists was historian Irfan Habib, who too looked bewildered by the RSS thinker’s claims on the historical monuments built by the Mughal emperor.

Nigam said, “Taj Mahal is a national icon, but i still believe it was not built by Shahjahan…Taj Mahal was built in 1000 AD. It can be proved. There are symbols of Hinduism all over the place. Red Fort was built by Tomar dynasty.”

He then claimed than Delhi Jama Masjid was originally a Yamuna Temple and he could prove it. When asked by the anchor to express his opinion on Jammu Kashmir’s Hazratbal shrine, he expressed his ignorance.

Nigam’s comments have prompted social media users to target the RSS thinker for his crazy claims.

This RSS historian argues Taj Mahal, Lal Qila and Juma Msajid have not been built by Mughal Emperor Shah Jahan but by Hindu Rulers – Enough evidence to send the RSS to mental asylum! https://twitter.com/RifatJawaid/status/972362970507464705 … 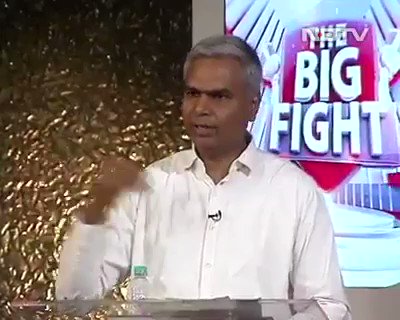 Don’t laugh at this man’s stupidity. Won’t be surprised if this becomes an authentic piece of history books in new India.

Don’t laugh at this man’s stupidity. Won’t be surprised if this becomes an authentic piece of history books in new India. pic.twitter.com/o8oHvxRGu6

Own interpretation by Chaddi dharis

Modi said kaurav is the first stemcel research in the world

Nigam’s claims come just days after it was reported that the Centre’s Narendra Modi government had formed a committee to rewrite India’s history. A report by Reuters had said that the central government had quietly appointed the committee of scholars about six months earlier.

The report by Reuters had said, “Minutes of the meeting, reviewed by Reuters, and interviews with committee members set out its aims: to use evidence such as archaeological finds and DNA to prove that today’s Hindus are directly descended from the land’s first inhabitants many thousands of years ago, and make the case that ancient Hindu scriptures are fact not myth.”

The committee’s chairman, KN Dikshit, had told the news agency, “I have been asked to present a report that will help the government rewrite certain aspects of ancient history.” The committee’s creator, Culture Minister Mahesh Sharma, too had confirmed in an interview that the group’s work was part of larger plans to revise India’s history.

PUCL to appeal against Seema Azad's conviction
Maharashtra's role exposed during Emergency in India #Vaw
New York- How One College Handled a Sexual Assault Complaint #Vaw
Kubbra Sait Reveals She Was Sexually Abused as a Teen: ‘Although Uncomfortable, I Kept Quiet’