Postal employees in Mananthavady in Wayanad in Kerala sit on an indefinite strike demanding regularisation as government employees. Rural postal employees across the country have been protesting for eight days

Rural postal employees across the country have been protesting for eight days, but the Narendra Modi-led central government seems to have turned a blind eye to their concerns

In a show of unity across the country, more than 2,70,000 postal employees in rural areas have been protesting across the country since May 22, demanding regularisation as government employees and implementation of the Kamlesh Chandra Committee reforms submitted in November 2016, but the government seems unperturbed by the indefinite strike or their demands.

The protest by Gramin Dak Sevaks’ (GDS) on Tuesday reached its eighth day, but “nothing concrete” has been done by the Narendra Modi-government, alleged All India Postal Employees Union—Gramin Dak Sevak (AIPEU-GDS). The strike has led to the shut down of more than 1,29,000 post offices across the country and the postal employees have declared an indefinite strike until their demands are met. 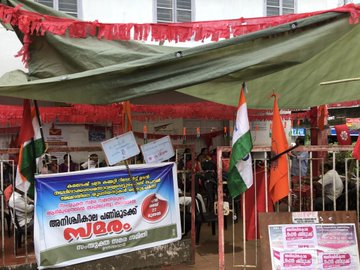 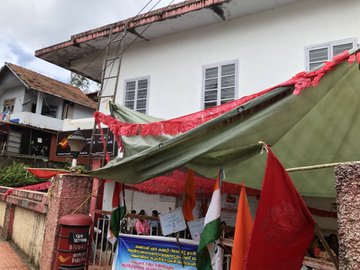 In the days of emails one may not notice it, but postal employees across India are on an indefinite strike. Many of our postal employees don’t even get minimum wages. Unions across parties are in the strike that has entered its 8th day. Modi govt is in no mood to resolve it.

The Union Government had constituted a one-man Kamlesh Chandra Committee in the Seventh Pay Commission to study the wage structure of the rural postal employees and review and suggest changes in existing wage structures, facilities and other social security benefits provided to them.

The committee, had in its report, recommended the minimum wage of the rural postal officers be made ₹10,000 and a maximum of ₹35,480, the abolition of the 50 years age limit, an annual hike of 3% and a children’s education allowance of Rs 6,000 per annum. They had introduced a risk and hardship allowance of ₹500 per month for those working in the special areas. The Committee had increased the ex-gratia gratuity to ₹5,00,000 from ₹60,000, while also suggesting that the scope of the Circle Welfare Fund (CWF) scheme should include immediate family members.

“The government has been offering nothing to us. So, we are going to continue with the indefinite protest,” says P Pandurangarao, the General Secretary of AIPEU-GDS.

The government has been stating that they require at least three months to implement the suggested reforms. “But when they have done nothing in the past 18 months, we have no confidence in them anymore and that’s why we have demanded it in writing,” says Pandurangarao. “But they have refused,” added Pandurangarao.

“Even though we are government employees, our life is worse than daily-wage labourers,” says Pandurangarao, adding “we get no subsidies, no benefits and have no choice but to survive with a meagre salary. The government does not even provide us with basic facilities such as a house for an office or the electricity bill. It’s the head Post Master’s responsibility to arrange for a place for the ‘Dak Ghar’ (Post Office)”

Although GDS’ are central government employees, they are considered temporary employees which deprives them of various benefits such as the retirement benefit, pensions, etc. “After working for 35 to 40 years, we are given a meagre retirement benefit of ₹1,00,000. Our per day salary is not more than ₹300 and every year we get an increment of ₹50 to ₹60. We get no other benefits,” Pandurangarao says. “How is it possible for us to survive like this,” he asks.

All India working president of AIPEU-GDS, Virendra Sharma says, “There have been at least five rounds of talks, but nothing conclusive has come out of it. Our demand is simple; implement the reforms suggested by the Committee constituted by you (the government). The protests have affected lives in rural India and we don’t wish to continue, but the government is simply not ready to listen.”

“On June 1, we will protest outside the Ministry of Communications’ office in New Delhi. We will not give in even if they turn a blind eye to us, they (the government) will have to listen to us,” says Sharma.