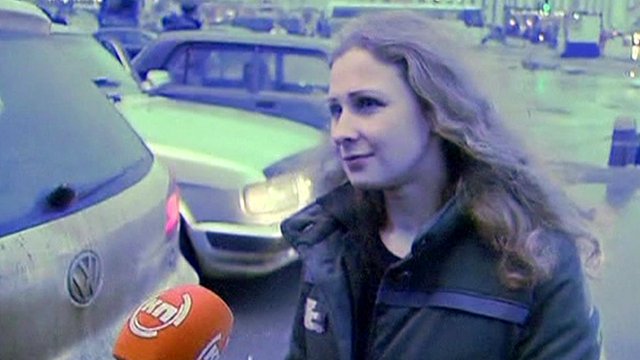 Maria Alyokhina: “I intend to pursue a career in human rights”

Both jailed members of Russian punk protest band Pussy Riot have been freed early from prison under an amnesty law.

Nadezhda Tolokonnikova walked free from a prison hospital in Siberia, while band mate Maria Alyokhina, was freed earlier on Monday in Nizhny Novgorod.

Both have dismissed the amnesty as a PR stunt ahead of Russia’s hosting of the Winter Olympics in February.

The women were jailed in August 2012 after performing a protest song in Moscow’s main cathedral.

The act was seen as blasphemous by many Russians, but their conviction for “hooliganism motivated by religious hatred” was criticised by rights groups, anti-Putin activists and foreign governments.

As soon as Maria Alyokhina stepped through the prison gates she described the amnesty law under which she was released as a “profanation”, since it applied only to a minority of convicts.Most pundits see the amnesty as President Putin’s attempt to soften his image in the West and improve his human rights record ahead of the Sochi Olympics in February 2014.

Two days after the amnesty came into force Putin pardoned Mikhail Khodorkovsky, once Russia’s richest man and his personal foe, in a move that again was widely seen as an attempt to appease the West.

At his Berlin press conference on Sunday, Khodorkovsky appeared to strike a conciliatory tone, vowing to stay out of politics and saying that he did not feel hatred towards the man who finally pardoned him after more than 10 years in jail.

The Pussy Riot members’ stance appears to be less serene. Tolokonnikova’s husband told the BBC that “the only thing they have acquired over their two years in prison is their confidence to continue fighting Putin’s regime even harder”.

Alyokhina’s first words and actions after being freed serve as a sign that this fight is likely to get more fierce and more personal.

Their sentences were due to end in March 2014, but their release became imminent after Russia’s parliament passed a law last week giving amnesty to some 20,000 prisoners, including mothers. Both women have young children.

The amnesty has widely been seen as attempt to dampen criticism of Russia’s human rights record ahead of the Winter Olympics.

Former oil tycoon Mikhail Khodorkovsky – once Russia’s richest man – was also pardoned on Friday and freed after more than 10 years in prison for fraud and tax evasion.

Appearing healthy and calm, she shouted “Russia without Putin” as she emerged.

“They [the government] just put on another show ahead of the Olympics,” she said of the amnesty.

“Such is their big desire to prevent all European countries from boycotting our Russian Olympics.”

“But let us remember about all those people who are not much talked about and are even forgotten but who still need to come out of their jails as they don’t belong here.”

She called for reform of Russia’s prison system, and said she and Alyokhina would now form a group to engage in the human rights movement.

Alyokhina, released earlier on Monday, told Russian TV that her views of President Putin had not changed and that the amnesty was “a profanation” and “a PR exercise”. 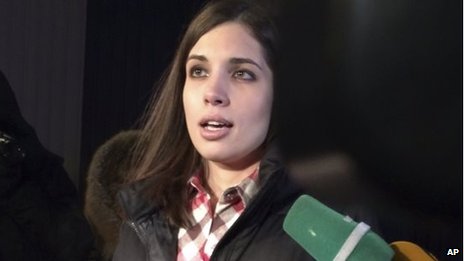 Nadezhda Tolokonnikova was being held in a Siberian prison hospital

“If I had a choice to refuse [the amnesty], I would have, without a doubt,” she added.

Russian media quoted a friend of Alyokhina as saying she had wanted to serve out her sentence as she was concerned for the safety of fellow prisoners and wanted to protect them.

Alyokhina and Tolokonnikova were both convicted after performing an obscenity-laced song called Punk Prayer in Moscow’s Christ the Saviour cathedral in February 2012.

The song was heavily critical of the Orthodox Church’s support for Russian President Vladimir Putin, calling on the Virgin Mary to “throw Putin out”.

A third Pussy Riot protester, Yekaterina Samutsevich, was also jailed, but was released on appeal in October 2012.

“The only thing they have acquired over their two years in prison is their confidence to continue fighting Putin’s regime even harder, because, well, this is the only thing that can change things in our country,” he said.

Charges against 30 people arrested while taking part in a Greenpeace protest at a Russian Arctic offshore oil rig may also be dropped later this week under the amnesty law.

The group – mostly foreign activists – have been charged with hooliganism.

Mr Khodorkovsky’s surprise release was approved by Mr Putin last week. He was pardoned on humanitarian grounds, because his mother is seriously ill.

The former tycoon has always insisted his conviction was politically motivated, because of his financial support for opposition parties.

Speaking from Berlin, where he flew after being freed, he said he would stay out of politics, but would do all he could to free Russia’s other political prisoners.