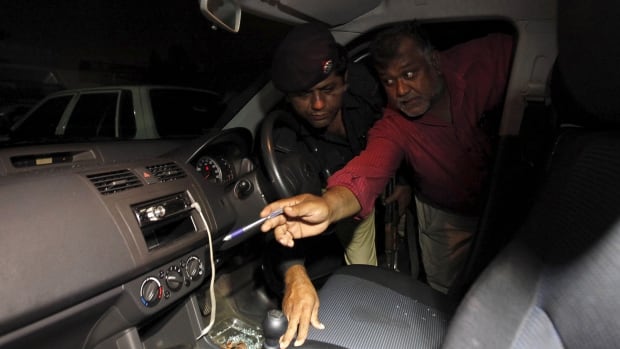 A policeman and security officer inspect a car after a shooting incident in Karachi, Pakistan, April 25, 2015. Gunmen shot dead a Pakistani human rights activist on Friday after she hosted a talk on the politics of Baluchistan province, where security forces are fighting a separatist insurgency, police and associates said. REUTERS/Akhtar Soomro – RTX1A6JO (REUTERS) Pakistan civil liberties activist and social worker Sabeen Mahmud was shot dead by unidentified gunmen in Karachi Friday night as she headed home from a talk on the troubled Balochistan province. She was 40.

According to the Dawn website, Sabeen left The Second Floor — she was the director of T2F which she called a community space for open dialogue — with her mother shortly after 9 pm and was on her way home when she was shot. She died on the way to hospital. Doctors said they retrieved five bullets from her body. Her mother was said to be in a critical condition.

The brain behind Pakistan’s first hackathon in 2013, Sabeen told the Wired magazine: “Fear is just a linein your head. You can choose what side of that lineyou want to be on.”

The invitation on the T2F site read: “In the spirit of academic enquiry, we invite you to an open and honest discussion about Balochistan with those who marched from Quetta to Pak activist, who said fear is just linein her head, shot dead in Karachi, mother injured Islamabad, followed by a session on Balochistan in the media.”

“Despite the plurality of opinion, very little space seems to be given to the discussion in Pakistani mainstream media or academia; the debate seems to be shut down before it can even begin. What is the reality? Has the media been silenced on Balochistan? What makes it dangerous for us to talk about Pakistan’s largest province at one of our most celebrated universities? What constitutes national interest? Does Mama Qadeer represent separatists’ interests? What are the mechanics of reportage? Have human stories been shunned? What are the casualties on allsides? How does Chinese investment affect Balochistan and its people’s struggles?”

This is how she was described on the WorldEconomic Forum website for young global leaders: “Social entrepreneur, committed to the intersection between the liberal arts, technology and activism. Blogger, civil liberties activist… Founder and Director, PeaceNiche, a not-for-profit organization based in Karachi, Pakistan that promotes democratic discourse and conflict resolution through intellectual and cultural engagement within and beyond the premises of its multipurpose space, called The Second Floor (T2F). Has created a hub for creative expression in the chaotic, troubled port city of Karachi. A meeting place and playground for poets, writers, artists, musicians, thinkers, entrepreneurs, students and activists.”

KARACHI: Peace activist and founder of T2F Sabeen Mahmud, who died from gunshot wounds on Friday, was a woman of many talents that mostly revolved around creating digital platforms for arts and culture.

An only child of an educationist mother and advertising professional father, Ms Mahmud was born in Karachi and received her early education from Karachi Grammar School. After completing her O levels, she went to Lahore to get a Bachelor’s degree from the well-known Kinnaird College. After returning to Karachi, she joined a technology company Solutions Unlimited, headed by Zaheer Kidvai, who went on to become her life-long mentor and a close friend.

The company that also included Jehan Ara, president of the Pakistan Software Houses Association, created pioneering multimedia CDs in the late 1990s. Her passion and drive led her to head her own company Beyond Information Technology Solutions, an interactive media and technology consulting firm which she set up with the help of her mentor whom she lovingly called Zak. She also helped establish The Citizens Archive of Pakistan along with Sharmeen Obaid-Chinoy and was also the president of The Indus Entrepreneurs.

According to an interview, Ms Mahmud said her biggest dream was to change the world for the better through the internet and communication technologies and T2F was part of that dream.

She set up The Second Floor (T2F) as part of her non-profit umbrella called PeaceNiche of which T2F was her first major project in 2007.

The watering hole soon started organising talks, discussions, exhibitions, pioneering events (Pakistan’s first hackathon, stand-up comedy acts) with prominent local and international artists, writers and activists that it became essential for nearly everyone to attend these events at T2F as Ms Mahmud passionately worked for it day and night from fundraising, marketing to building maintenance.

An amateur sitar player and founder member of the All Pakistan Music Conference, Ms Mahmud not only organised music programmes but also gave space to music educationists at T2F.

BJP supporters throw stones at Dalit protestors outside Fadnavis swearing-in ceremony #WTFnews
#India - 'What we are seeing is the Modi-isation of Congress’
Delhi Police flouts NHRC order to file report on attack on The Caravan’s journalists
Come Together: Maruti Suzuki Workers' Solidarity March