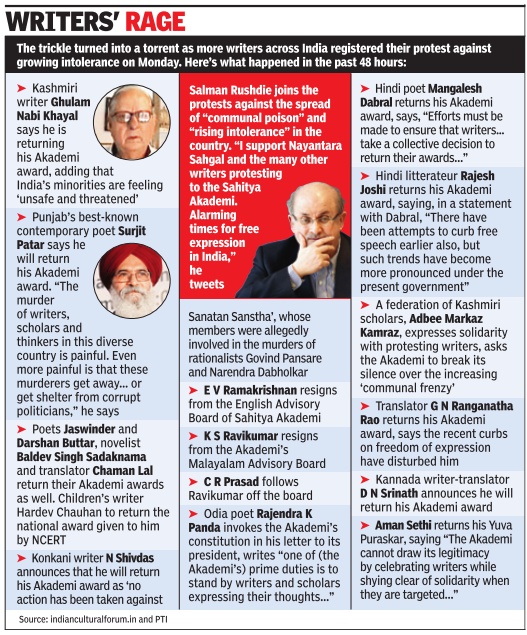 Over the past one week, disgruntled writers and poets across the country have returned the prestigious Sahitya Akademi Award to protest the increasing incidents of communal violence in India.

Several elite writers and poets have also resigned their posts in the 20-member General Council of the country’s top literary body, saying that they were shocked at the level of intolerance on freedom of speech and expression.

Hindi writer Uday Prakash was the first to return the prestigious award. Writer Nayantara Sahgal and poet Ashok Vajpeyi followed Prakash in protesting the murders of rationalists like MM Kalburgi, Govind Pansare and Narendra Dabholkar. They also came out against the shocking Dadri incident, in which a mob lynched a Muslim man in Greater Noida over rumours of eating and storing beef.

At least 17 authors  have returned the prestigious Akademi award, while four have resigned elite posts of the organisation.

Journalist and writer Ibrahim Afghan to return his Sahitya Akademi award, along with seven others, in protest of climate of intolerance.

The list does not include six Kannada writers who returned the State literary award on 3 October.

List of litterateurs who resigned from Sahitya Akademi posts

The marriage vows between Bhatkal and Karachi
Mobile phone based report for Community Radio from Idinthakarai, Kudankulam
Gujarat is not a model state for the Dalits
Bangalore - Kendriya Vidyalaya Principal arrested on sexual harassment charges #Vaw