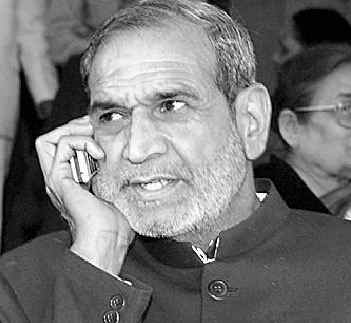 Protests erupt inside & outside court, shoe flung at the judge

Unhappy with acquittal of Congress leader Sajjan Kumar in an anti-Sikh riots case, a man hurled a shoe at the judge as protests erupted inside and outside Karkardooma court here today after pronouncement of the verdict, with police detaining several people.

Anticipating trouble, police had deployed personnel in strength and barricaded the area but some of the protesters managed to enter the complex. However, they could not enter the courtroom.As soon as the judge acquitted the Congress leader while convicting five persons, angry protesters shouted slogans against Kumar and tried to enter the complex. Complainant Jagdish Kaur sat on protest inside the courtroom saying she would not leave until justice is done.

One of the victims, who lost her son and husband in the riots after the assassination of the then Prime Minister Indira Gandhi in 1984, said there was “no justice” for them. “There is no justice for us. My son was killed, my husband along with his brothers were killed. There was reign of terror for three days (during the riots). People were burnt alive,” the victim said. Police detained several protesters, including the one who threw a shoe at District and Sessions Judge J R Aryan after the pronouncement of the judgement.

New Delhi:  Sajjan Kumar, a former Congress MP, has been acquitted by a special CBI court of all charges in one of three 1984 anti-Sikh riots cases against him. He was accused of murder and of instigating a riotous mob that killed five Sikhs in Delhi’s cantonment area on November 2, 1984. Five other people accused in the case have been convicted, three of them of murder.

Here are 10 developments in the case:

If women’s safety is all about owning a handgun, what about the rapist who lurks at home?
Two more deaths again in Assam tea garden
Gujarat: Ex-cops challenge PP Pandey's elevation as DGP
Press Release - Statement from Asha on IB Report