Reviving the traditional practice of keeping water on a raised platform and tilting it to take water prevents contamination. (Photo by Shahnawaz Alam)

By reverting to the traditional practice of keeping water pots in a garsadi, a raised platform, villagers in Jharkhand have successfully prevented contamination of drinking water, improving health in households

Sumitra Soren of Bhurkundi village in Deoghar district of Jharkhand has a greater wisdom in handling drinking water. Her simple practice of keeping drinking water covered in a pot on a raised platform called garsadi or ghirsuri has considerable significance. What Soren practices is not only the revival of an age-old tradition of the Santhal tribes, but also a scientific behavior regarding drinking water hygiene.

Palojori, the administrative block under which Bhurkundi falls, and Jama are part of the Santhal Pargana division where tribes constitute 29.88% of the population, a majority of them being Santhals. They practice rain-fed agriculture, though in recent times they have started growing winter and summer crops after the advent of various irrigation structures.

Being a hilly region, availability of safe drinking water is an issue, despite good annual rainfall of around 1,162 mm. People depend on hand pumps and wells for drinking water and for other household uses. During monsoon, the water in open wells becomes easily contaminated, and in summer, the water level dips low, making it turbid.

Santhals traditionally give high priority to hygiene and the greatest sanctity to drinking water. Their mud houses are so clean and beautified with native art that outsiders find it hard to believe that they are mud houses.

The Santhal tribes, and others too, once had a strong tradition of keeping their drinking water in a safe and hygienic manner. They used to store drinking water covered, in a ghara, an earthen pot with a narrow neck, and place it on a garsadi, or a raised platform, near the entrance of their courtyard. They would serve visitors water to drink as the first courtesy. 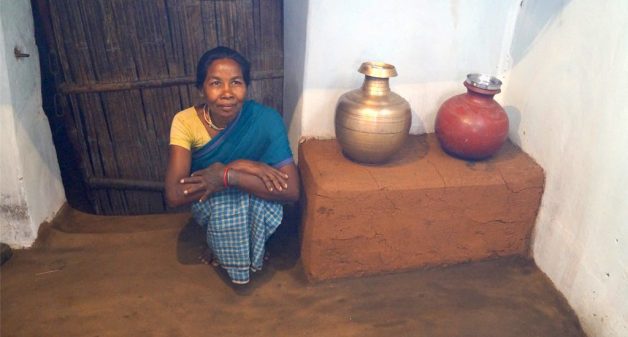 Keeping drinking water pots on a raised platform signifies it is for drinking. (Photo by Shahnawaz Alam)

Gradually, the practice withered away for various reasons. Steel, aluminum, brass and plastic vessels have replaced the earthen pots. People keep the pots inside the house as they cost more and it is not safe to keep them outside any more.

Unlike the earthen pots, these do not leach and people keep them on the ground without fear of the floor becoming damp. According to villagers, the present generation does not want to take the extra effort in maintaining garsadis.

Many do not consider it modern. Speaking to VillageSquare.in, Maharani Marandi of Fuljori village revealed that when she suggested reviving garsadis in her self-help group, many women were reluctant, considering it a practice of the past.

As most people use water from hand pumps for drinking purpose now, safety of water at source is assured, unlike earlier, when people relied on open wells. But the biggest challenge arises during storage and usage when the chances of contamination are high.

In 2015, Collectives for Integrated Livelihood Initiatives (CInI) of Tata Trusts, under its Water and Sanitation Program held a community meeting in Bhurkundi to discuss better management of safe drinking water. The community had great knowledge about safe handling. Jiyamuni Baski told the gathering about the tradition of keeping pots on a platform. 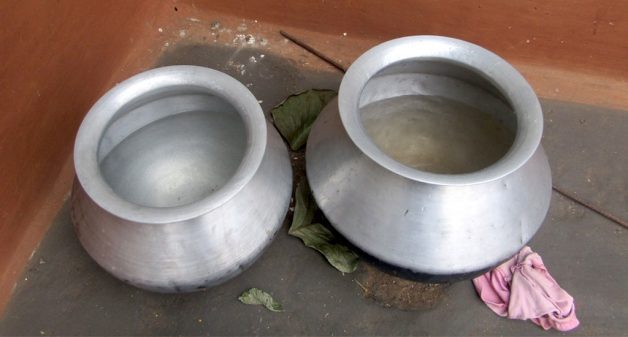 The practice of storing water on the ground prior to revival of traditional garsadis was not a hygienic practice. (Photo by Shahnawaz Alam)

While storing water in an earthen pot on the ground, the leaching water makes the earthen ground damp and worms start living there, which is not healthy. Dust easily pollutes water. Often household pets also put their mouth in the pots. Kids pollute water by putting their hands in them.

Traditionally, the Santhals serve drinking water by tilting the pot so that the fingers do not touch the water. Speaking to VillageSquare.in, Gori Devi of Kherwa village recalled her mother’s advice, asking her to clean the earthen pot before filling it and to keep to it on an elevated corner. After a fair amount of discussion, the community decided to revive garsadi to ensure that the drinking water was safe.

Bringing about change was not easy. Though the idea came from the community, many resisted, saying that they were comfortable with the present practice. They knew it was better to keep water on garsadis but failed to see the established relationship between health hazards and unhygienic practices.

Many cited non-availability of bricks as a reason for not constructing garsadis. There was inadequate planning too. Garsadis were not the priority for some, who agreed to construct but did not. For many, the focus was on construction and use of toilets, at the cost of garsadis.

Despite the challenges, there is great scope for reviving the practice. As it is an age-old tradition, nobody opposes the idea. Moreover, construction involves almost no cost as it can be made with locally available materials, without a mason.

The implementing agencies used various tools like skits, animated movies, messages from local leaders and rallies by school children to inculcate the behavior of using garsadis that were once a part of their lives. They trained school children and also put posters that depicted the correct way of handling water. Photos from Gujarat, where people keep pictures of gods or decorate the place around water pots with utmost beauty motivated the community.

By making people aware and reviving the traditional practice, their attitude towards drinking water safety changed considerably, thus preventing possibilities of diarrhea. The Santhals’ traditional knowledge and practice of water hygiene was a supporting factor. There is also scope for combining tradition with modernity by fixing a tap to the earthen pot.

The community carried out an evaluation in each village after about two months of campaign. They felicitated those who had adopted the practice, with garlands and stars. During this period, 80 households out of 279 had revived the tradition by constructing garsadis in their houses. The practice keeps spreading to many villages.

As availability of safe drinking water in Santhal Pargana is a big issue, preventing water from getting contaminated is of considerable value. “Keeping water in garsadi beyond the reach of kids and pets signifies that it’s for drinking purpose,” Lilmuni Mundu of Fuljori village told VillageSquare.in. “It naturally reminds me to fill fresh water every morning.”

Shahnawaz Alam, a development professional, is Coordinator for Drinking Water and Sanitation program of the Collectives for Integrated Livelihood Initiatives.

Narendra Modi--'Vote for me, not candidates’
A History Lecture Under the Shadow of Thugs
Sayabasachi Panda’s Arrest in Odisha : A Different Perspective
How To Steal a 79000 Crore Rupee Forest - The Keonjhar Take Over