Sara Hegazy, the pioneering Egyptian LGBT+ activist who was tortured for flying a Pride flag, has died by suicide 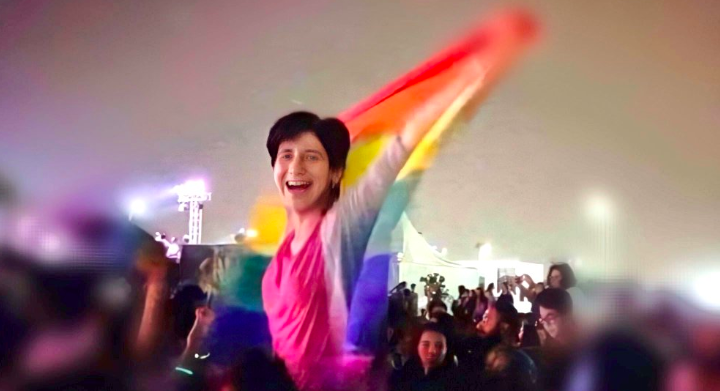 Sara Hegazy, an Egyptian LGBT+ activist who was jailed and tortured for raising a Pride flag at a concert, has tragically died by suicide at the age of 30.

After being freed from prison, Hegazy was granted asylum in Canada, but continued to suffer from PTSD and depression caused by her traumatic imprisonment.

She sadly took her own life on Sunday, leaving behind a note handwritten in Arabic asking her loved ones to forgive her.

“To my siblings – I tried to find redemption and failed, forgive me,” she wrote. “To my friends – the experience [journey] was harsh and I am too weak to resist it, forgive me.

“To the world – you were cruel to a great extent, but I forgive.”

Sara Hegazy: ‘Prison killed me. It destroyed me.’

Hegazy caught the attention of Egyptian authorities in October 2017, when she held a rainbow flag at a Mashrou’ Leila concert in Cairo. The band’s lead singer Hamed Sinno is openly gay and an advocate for LGBT+ rights in Lebanon.

It was “an act of support and solidarity… for everyone who is oppressed,” she later said in an interview with NPR.

“We were proud to hold the flag. We wouldn’t have imagined the reaction of society and the Egyptian state. For them, I was a criminal – someone who was seeking to destroy the moral structure of society.”

This rare show of public support for the LGBT+ community sparked backlash in the largely Muslim country. Hegazy was promptly arrested, the only woman alongside at least 56 others who were arrested for raising the flag.

She was charged with “promoting sexual deviancy and debauchery”, and jailed for three months. There she suffered horrific beatings and abuse at the hands of other inmates, while prison officials would “violently assault” and torture her with electrocutions.

When Sara Hegazy was finally released on bail she fled to Canada, but struggled with her mental health in the years after her imprisonment. “Prison killed me. It destroyed me,” she said after she escaped.

Her death and note were later confirmed by her lawyer Khaled Al-Masry on Monday, and her fellow activists rushed to pay tribute using the hashtag #RaiseTheFlagForSarah.

Her name was #SarahHegazi. She was assaulted & imprisoned in #Egypt for raising the #prideflag at a concert. She recently committed suicide.

to send a clear message: Violence against #LGBTQ & women will no longer be worn as a badge of honor in Egypt. pic.twitter.com/vdIhzWU3Fy

amazing egyptian queer activist Sarah Hegazy has claimed her own life today. She was in exile after she got imprisoned in 2017 for her ferocious, courageous queer activism. this is too heartbreaking.

Sarah Hegazy, 30, an Egyptian- Queer activist, died today in exile in Canada after she was arrested and tortured by the security forces in Egypt for inciting dawn and immorality. She was brave and full of hope,but the cruelty of sorrow, loneliness and oppression divided her back pic.twitter.com/gVtCb62tqu

Sarah Hegazi dared to honestly be herself for a few moments

For many in Egypt living safely requires living a lie. For those who demand honest existence, the choices are prison, exile or death

Sarah experienced all 3…because she loved honestly in a place that hated her for it pic.twitter.com/ri4DCnjA2n