Switching from traditional rain-fed crops such as rice and wheat to growing vegetables through the year, women farmers of Saran district in Bihar have ensured financial and food security without any external assistance 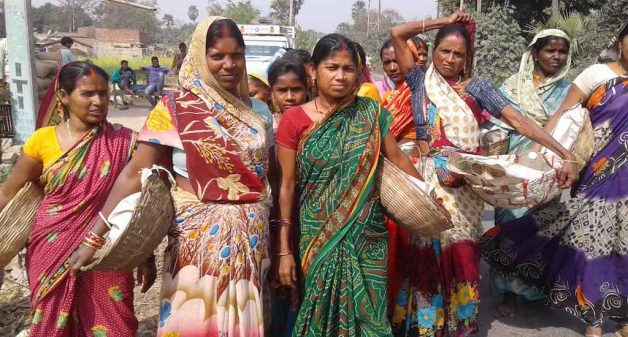 Rameshwari, in her mid-40s and clad in a colorful cotton sari, was busy in her field, sowing seeds and uprooting weeds. “Unlike in other places, you’ll find more women in the farmlands here than men,” the resident of Gokur village in Mohammadpur panchayat in Garkha administrative block of Saran district told VillageSquare.in.

Rameshwari Devi, Shanti Devi, Rajpati Devi and more than 60 women like them have one thing in common: growing vegetables has transformed their lives and changed the face of their village.

The women, mostly belonging to Other Backward Castes and Extreme Backward Castes, besides Dalits, are either landless or have very little land of their own. They have been growing vegetables, on their own initiative, without any external support.

They work hard for hours, unmindful of the weather — whether it is scorching sun, cold wave or heavy rains — to grow vegetables on a large scale. Their vegetables have given an identity to their backward village.

Agriculture is the sole livelihood in this area, with rice as the main crop grown in the Kharif or monsoon season and wheat, pulses and maize as the other crops grown in the Rabi or winter season.

Agriculture is mostly rain-fed, with production directly linked to the amount of rainfall. Most of the villagers who practice agriculture are marginal farmers, having less than half-an-acre of land. They used to cultivate traditional crops.

Due to lack of knowledge and skills on non-traditional farming, and lack of or limited market avenues, farmers could not earn a steady income and hence lacked economic security.

Rameshwari has been growing vegetables including okra, sponge gourd,pumpkin, cucumber, bitter gourd, beans, cauliflower, cabbage, potato and onion.Most of the women said they were no longer worried about their livelihood. “We earn respectable income by growing vegetables through the year,” they said.

Rajpati cultivates all types of green vegetables. The produce gets her good return that helps her run the family. “Earlier we were struggling for survival as we had no source of income,” she told VillageSquare.in.“Now we get regular income by growing vegetables.”

Most of the women were fighting against poverty before taking up vegetable cultivation. But not anymore. Earning enough from their farms has ensured them food security. Successful vegetable farming and the ensuing financial security have boosted the confidence of the women.

Women in the forefront

Manoj Kumar, who works in the local post office, said women have made a name for themselves by growing vegetables. “In our village of over 200 households, more women are in the farms than men,” he told VillageSquare.in. 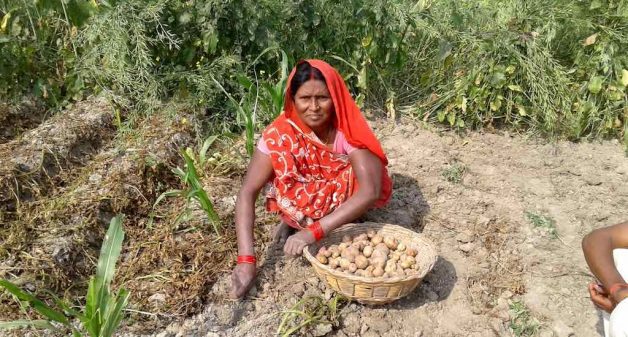 Pulak Kumar, block development officer of Garkha, said that a big group of women were doing an extraordinary work that has given them a name and an earning. “We will encourage these women to grow vegetables organically and we will provide them with incentives,” Pulak Kumar told VillageSquare.in.

According to Chandan Kumar, a youth, women of his village have brought a silent change of prosperity, empowerment and inspiration for others.

Rameshwari, whose husband Ram Balak Singh is a small time hand pump mechanic, has only five kathaof her own land (less than one third of an acre), but she grows vegetables in over two bighaof land. “I have taken landon annual leasefrom farmers who are not interested in agriculture,” she told VillageSquare.in.

Similarly, Rajpati owns nearly 5 katha of land but she has taken 15 katha on lease for growing vegetables. Shanti virtually has no land of her own and grows vegetables on land taken on lease from affluent farmers.

“Whatever little income we make from the leased land has given us hope of saving for the future,” Shanti told VillageSquare.in.The women admitted that growing vegetables even on leased land had brought them achche din or good times.

The women farmers have no problem in selling their produce. Traders from nearby markets as well as those from Chapra, the headquarters of Saran district, throng the village and purchase vegetables directly from the women.

“The government should support by setting up women vegetable growers’ society,” Dinesh Kumar Rai, chief of Mohammadpur panchayat, told VillageSquare.in.“They should recognize the women farmers’ model and promote it in all the villages across the state.”

He said that only a handful of women started growing vegetables in the village initially. Soon other women got interested after observing their success. “District administration should provide irrigation facilities, vegetable processing centers and local retail centers,” he said.

Agriculture is the backbone of Bihar’s economy. The percentage employed in agriculture production system in Bihar is estimated to be 77%, which is much higher than the national average. Nearly 24.84% of Gross Domestic Product (GDP) of the state (2011-12) is from agriculture sector – including forestry and fishing.

Agriculture is the single largest private sector employer in Bihar. Sunil Kumar Singh,agriculture production commissioner, stressed that third agriculture road map (2017-22) has coupled vegetable cultivation with the establishment of organic corridor along both sides of the Ganga, where farmers will practice organic farming with input subsidy from the state government.

He said that women cultivating vegetables is a positive development in the agrarian sector. According to him, Bihar is the third largest vegetable producer in the country and it has the potential to grow further. “If more women grow vegetables, it will help fulfill chief minister Nitish Kumar’s dream of oneBihari dish in every Indian’s plate,” he told VillageSquare.in.

Mohd Imran Khan is a journalist based in Patna.