Poets from around the world are lining up in solidarity with the Palestinian poet Ashraf Fayadh, with the Syrian poet Adonis, Ireland’s Paul Muldoon and Britain’s poet laureate Carol Ann Duffy among the signatories to a letter laying out how “appalled” they are at the death sentence he has been handed by Saudi Arabian authorities.

Fayadh was sentenced to death last week for renouncing Islam, a charge which he denies. Evidence used against him included poems from his collection Instructions Within, which is banned in Saudi Arabia, as well as his posts on Twitter, and a conversation he had in a coffee shop in Abha which was said to be blasphemous. He was given 30 days to appeal the sentence.

Today, PEN International published the latest salvo from an international arts community which has rallied behind him, with Muldoon, Duffy and Adonis joined as signatories to a letter attacking Saudi Arabia’s ruling by major names from the world of international poetry including the Serbian-American poet Charles Simić, the American John Ashbery, Palestinian Ghassan Zaqtan, Israeli Amir Or and the Hungarian-born George Szirtes.

“We, poets from around the world, are appalled that the Saudi Arabian authorities have sentenced Palestinian poet Ashraf Fayadh to death for apostasy,” they write, in a letter which PEN International hopes to deliver to the poet himself in an expression of solidarity. “It is not a crime to hold an idea, however unpopular, nor is it a crime to express opinion peacefully. Every individual has the freedom to believe or not believe. Freedom of conscience is an essential human freedom.”

The letter says that Fayadh’s death sentence “is the latest example of the Kingdom of Saudi Arabia’s lack of tolerance for freedom of expression and ongoing persecution of free thinkers”, ending with a plea for the Palestinian’s release.

“We, Fayadh’s fellow poets, urge the Saudi authorities to desist from punishing individuals for the peaceful exercise of their right to freedom of expression and call for his immediate and unconditional release,” they write. 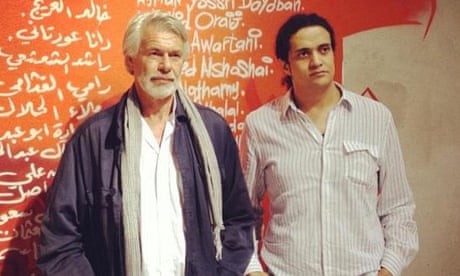 Speaking to the Guardian on Friday, Szirtes insisted that “opinions are not crimes”.

“Incitement can be a crime, hate speech may be a crime, but opinions are not,” he said. “That is precisely why organisations such as PEN exist. Any sentence for an individual opinion brings shame on Saudi Arabia: a death sentence brings maximum shame.”

According to Szirtes it is “incongruous for a country like ours to be allied with a country that makes decisions like this”.

“It runs counter to all our thoughts, habits and instincts, not just as poets or writers but as human beings,” he added. “Nor is it just a cultural matter: it is a matter of exactly that which we describe as universal human rights.”

The appeal follows the release of a joint statement signed by more than a dozen cultural and free speech organisations condemning the conviction of the Palestinian poet, including PEN International, which will be delivered to the Saudi embassy in London today by English PEN.

Last week, Fayadh told the Guardian that he was “really shocked” to receive his sentence “but it was expected, though I didn’t do anything that deserves death”.

“They accused me [of] atheism and spreading some destructive thoughts into society,” he said, describing his poetry collection as “just about me being [a] Palestinian refugee … about cultural and philosophical issues. But the religious extremists explained it as destructive ideas against God.”

Pen International pointed to extracts of Fayadh’s poems, translated by Mona Kareem. “it was said: settle there… / but some of you are enemies for all / so leave it now,” he writes in one. “look up to yourselves from the bottom of the river; / those of you on top should provide some pity for those underneath.”

The free speech organisation said that during his trial, the poet “expressed repentance for anything in the book that religious authorities may have deemed insulting”, and said, according to trial documents: “I am repentant to God most high and I am innocent of what appeared in my book mentioned in this case.”

On 25 November, the Guardian reported that, in a message to his supporters, Fayadh said he was “grateful for everyone working on my behalf”. “To be honest, I was surprised because I felt alone here. I am in good health. I’m struggling to follow all the developments. People should know I am not against anyone here, I am an artist and I am just looking for my freedom,” said the poet.