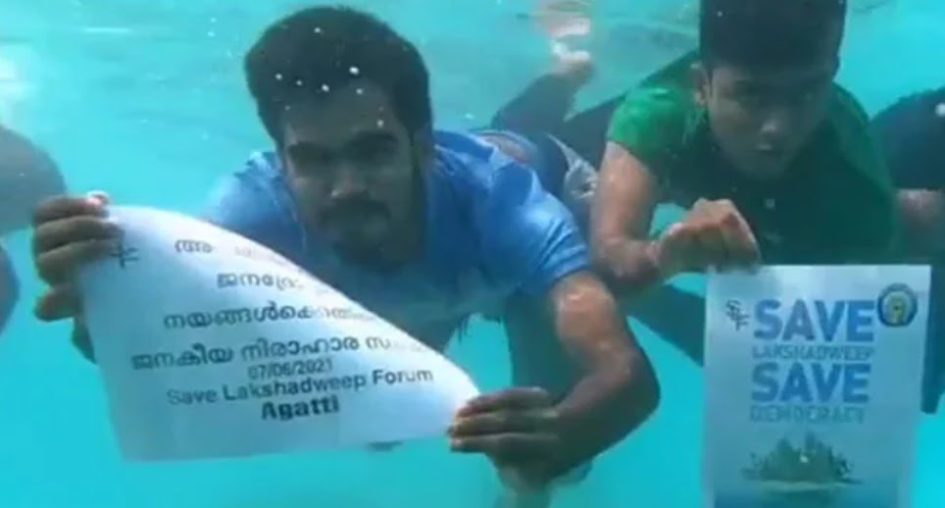 These regulations have caused severe anxiety amongst the islanders. The ban on beef, preventive detention, threatening tribal ownership of land, among other issues has caused the otherwise peaceful island to burst into protests. These moves by Patel play along with the centre’s policy of homogenising the nation as one entity under the guise of ‘development’ projects.

The NITI Aayog in its report Transforming the Islands Through Creativity and Innovation said it’s time for Lakshadweep “to promote tourism in such a way, which is economically viable, environmentally sustainable, socially acceptable and culturally desirable”. However, what is culturally desirable and socially acceptable if the residents of the island who form the culture and society do not stand by it? The idea of turning Lakshadweep into the Maldives moves away from the people-centric idea of development which has been in place in Lakshadweep.

The Lakshadweep Development Authority Regulation (LDAR) gives power to the authorities to relocate or remove the residents for development projects. This has created considerable uproar as the residents ask to retain their autonomy and property rights. Further, the Lakshadweep Prevention of Anti-Social Activities Regulation, which has also been referred to as the goonda act, allows the authorities to detain people for a year without publicly disclosing the reason for their detainment. The change to the Panchayat Staff rules prevents anyone with more than two children from running for Panchayat elections. All these regulations have been brought to the forefront without any consultation with the people of the island whom it directly impacts.

Additionally, the relaxation of COVID-19 travel restrictions in Lakshadweep by Patel and the subsequent increase in COVID cases in the island have also stirred outrage.

Former Administrator of Lakshadweep, Wajahat Habibullah, wrote a letter to the Vice President Venkaiah Naidu and Governor Arif Mohammed Khan along with other signatories Mohini Giri who was the former Chairperson of National Commission for Women, and Sayeda Hameed who was a former Member of the Planning Commission in-charge of Lakshadweep and Andaman & Nicobar islands. The letter urges the authorities to stop the LDAR as it threatens the ecosystem and the livelihoods of the people of Lakshadweep. The letter states, “We condemn the move of an individual who holds a position of authority in a politically and geographically sensitive area, since a law and order situation will likely result from the above stated arbitrary and irresponsible moves.”

The regulations by Patel, the signatories said, threaten the model of democratic decentralisation in Lakshadweep that takes into account the people and their ecological and cultural specificities. Coral reefs in Lakshadweep are stably maintained with the efforts of the community and their sustainable measures. These arbitrary regulations threaten to break this delicate connection in order to create a destructive model of development. The signatories wrote, “We further request that after the halt, you ask for an urgent review in consultation with the local bodies. The changes being proposed are stated to be for the ‘welfare of the human community’ that means a thorough consultative process with the said ‘human community’.”

The letter continues to say, “Given your sensitivity for ecology, we look up to you to set things right in the coral isles where each citizen has equal rights to options of livelihood, nutrition, land use, and all other choices that hold a community together. We have much to learn from this community. Let us be remembered as a generation that preserved the delicate ecosystem of the coral island, rather than one that presided over its deliberate destruction.”

On June 24, almost 60 scientists wrote to the President of India asking for his intervention. The scientists which included marine ecologists, wildlife biologists, coral reef ecologists, among others have pointed out that the LDAR 2021 is not in tandem with existing laws such as the Land Acquisition Rehabilitation and Resettlement Act, 2013; the Biological Diversity Act, 2002; the Environment (Protection) Act, 1986, among others. They have asked the President to revoke the LDAR 2021 immediately.

Kractivist’s campaign stands in support of #SaveLakshadweep. We demand the government to take cognisance of the demands of the residents, locals and experts and take back the arbitrary regulations that threaten the cultural, socio-political and ecological fabric of Lakshadweep. We stand by the people of Lakshadweep and attempt to amplify their demands with a twitter storm on Monday, 28 June from 5 pm to 8 pm. Join us in our efforts to keep the national and global attention on Lakshadweep.

This article is the second in a series of three articles trying to dive deeper into the issue of Lakshadweep and the repressive policies being proposed by the newly-appointed administration. This article aims to familiarize the readers with the demography and culture of the island territory of Lakshadweep, and how the economy and administration functions.

Kractivist’s campaign stands in support of #SaveLakshadweep. It is important for the readers to refer to the upcoming articles on this subject in order to enlighten themselves with the problems that citizens of Lakshadweep are going through. We demand the government to take cognisance of the demands of the residents, locals and experts and take back the arbitrary regulations that threaten the cultural, socio-political and ecological fabric of Lakshadweep.

We stand by the people of Lakshadweep and attempt to amplify their demands with a twitter storm on Monday , 28th June from 5 pm to 8 pm. Join us in our efforts to keep the national and global attention on Lakshadweep.