Savitri’s revenge: The story of how this ‘antharjanam’ shook the imperfect world of Namboodiri men 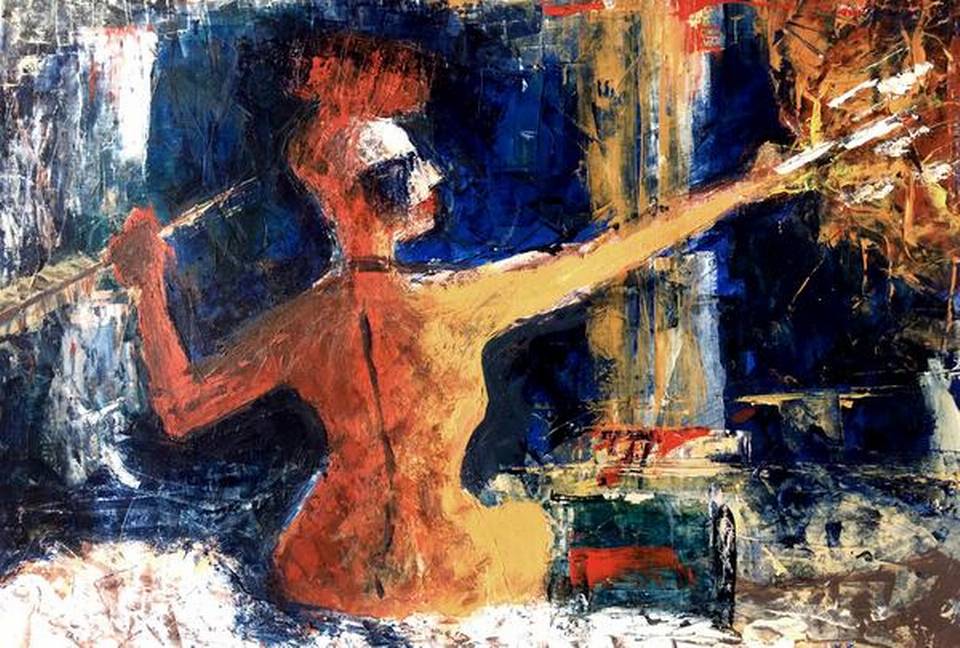 She was an antharjanam, meant to live pure and tame. But she was a lover of pleasure and she threw open her doors to all men

This is a real story from 1905, of Kuriyedathu Thatri, a Brahmin woman who, instead of staying in purdah and worshipping her gods, became a prostitute. Why she did what she did has always been a great mystery in Kerala. Archives in Kochi tell her story. During her trial for prostitution, she began to recite the names of all her famous clients. Great men fell. The king had to stop the trial. The Thatri case became a turning point in the history of women’s reforms. The novel  Pratikara Devata based on her life was written by Lalithambika Antharjanam.

She was called Savitri, named after a heroine so devoted to her man that death itself surrendered all claims to his soul. But heroines reign in the epics. This was a mortal who shook the imperfect world of men. Her tale began like countless others, ordinary and plain — it was the end that stirred tremors of fear, provoking waves of change. For this Savitri was not pure, and she was certainly not chaste. It’s as a pratikara devata that she is invoked: the goddess of fury and revenge.

Savitri of the epics birthed an ideal; Savitri, the woman, sought justice in vengeance. The first conquered Yama to resurrect her husband; the second scorned him, her memory shattering death with contempt.

Savitri was the daughter of a Namboodiri Brahmin in Kerala. Thatri, they called her, not out of love — for she was born when the stars spelled doom — but for reasons of convenience. It was in the late 19th century that she appeared, her life charted already in a gilded cage of tradition.

Namboodiri men were always to be pure; Namboodiri women, pure and tame. They could not move freely, for the gaze of strangers would corrupt them. They could not eat before their men had dined, but cooking was their ordained duty. They could wear no ornaments of gold, only brass bangles for the Namboodiri bride. To wear a shirt was sacrilege, and to fasten a blouse unheard.

When the young flouted norms, the old quaked in horror; the smallest change sparked fears that revolution had come, the end was near.

Savitri was an antharjanam. Creatures like her spent their lives in the darkness of ritual, in great houses where splendour marked everything that was not female. “Most antharjanams,” one like her said in 1937, “observe (purdah). They have eyes but are prohibited from seeing anything pleasant. They have legs but their movement is circumscribed. Their state is quite like that of household utensils… the antharjanam is a jailed creature… constantly watched; they are not permitted to breathe fresh air, to see the world.”

They could venture out shielded by large parasols and guarded by maids, but the world under the cadjan umbrella was, as a playwright declared, that place we recognise as hell. “An antharjanam is born crying, lives her life in tears, and dies weeping” — there was no escape for the Namboodiri woman, save that which came with death. And these were all gods with many demands to make. They insisted on baths — a bath in the morning and one in the evening. A bath if you left the house, and a bath if a traveller crossed the threshold. If the lowborn came your way, a dip was your remedy, and if you stepped on unsanctified ground, the stillness of the pond alone promised salvation. Purity was the goal, but it was also the fount of ceremonious oppression. Hand in hand they forged chains and the mind was enslaved.

But “the most distressing of all,” shuddered another Brahmin girl in her memoir, “was the traditional bath after delivering a child.” The thirsty mother, bleeding from the arrival of her husband’s heir, could have no water — not when the unclean midwife tainted her with breath and touch.

“So the first thing the antharjanam was forced to do,” it is said, was “walk to the kitchen tank… and take a bath” again. “Others would help her get there but, on the way back, she would have to negotiate the steps alone”. But loneliness was a familiar beast for Namboodiri women. And one more dip in that punishing sequence of baths not an unusually trying affair.

That which was terrible was marriage. The Namboodiri male, a census official observed, was a “royal liege and benefactor” to all who tilled his lands — lands the gods decreed were his before the pen met paper to invent records of the past. He was “suzerain master, household deity” and “god on earth” to those blessed to be his slaves.

Before him prostrated kings, and obeisance often came in the shape of the royal sisters. What was a mere wife before this manifestation of the divine? She lived to serve, to eat his scraps. Her purpose was to bring forth his offspring. And if he installed another wife, she rejoiced so one more might enjoy the ecstasies of servitude, placing body and soul at the disposal of her twice born lord. They were his so he could do his duty. His pleasure, however, he sought in embraces elsewhere.

Blame it on the stars

Savitri, though, was different. Her father was crossing a brook when they told him of her birth, and many were the lines she too would cross in the fullness of her time. She grew up, it is said, in a shadow cast by her inauspicious birth. But it is an apocryphal yarn woven to reconcile her subversive act — nobody could explain why she did what she did, so they blamed the mischief on refractory stars in a stormy sky. Her father cared enough for the girl to teach her to read, and there were those who heard her recite in a beautiful voice. At 18, she married a grandee decades her senior. Some say he rudely abandoned Savitri, casting her into domesticated oblivion; others say she was widowed, fated to spend the rest of her days in resigned piety. She was young but duty demanded the sacrifice of her identity.

The king in Kochi was horrified. He ordered the case be closed. Sixty-four men had fallen by then. Was the 65th the king himself?

Savitri was prepared for neither. She was a lover of pleasure, it was afterwards explained, for she loved watching theatre. She made love one day with a Kathakali actor when he was dressed as Keechaka, he who lusted for another’s wife. Savitri met him by a pond where they defiled each other, their act reflected in the waters where purity was thought to reside.

But Savitri made love with many men in many places — they told her to be chaste, but she threw open her doors, defiance steeling desire. She was a Brahmin, and no impulse was to be acknowledged. But Savitri did what she pleased, receiving scores of men in her chambers — till one day a visitor screamed. She was recognised. This was no prostitute, he cried. This was Savitri of Kuriyedathu house. She was an antharjanam, and she had sinned.

The year was 1905, and scandal was unleashed with a fury unknown. All of Kerala was transfixed. Waves of modernity had lashed the coast but the Namboodiris stayed obstinately aloof. Disdain was what they proposed for all that was new. They were too exalted to care, too wealthy to change. And suddenly their universe began to sink — the boat had holes already, but Savitri blew one that could not be plugged. The airs of a class were shattered, and the king in Kochi issued commands: the saadhanam — that “thing” no longer entitled to a name — must be tried. A few before her had also gone astray, and so they were cast out. Savitri too would be ostracised — her family prepared her funeral rites and slammed their doors in her face. That, they thought, would be the end of the accursed whore.

But Savitri was different from those before her. “I did not break the law alone,” she said. The men who came to her bedchamber should also be tried. She produced a treacherous catalogue — a list of gods-on-earth whose intimacies she revealed. She knew the dates of their unions and she knew the names of their families. The month was jotted down, and many more details too — a birthmark here, a mole there. Savitri welcomed punishment, but she would take with her these men. They gathered in judgement, certain the slut would fail. But the slut was clever, and there was no escape. Planting Savitri behind a screen, the chief interrogator screamed “Confess!” And so she did — and named also his brothers, offering proof of their crimes. With every name, Savitri hacked at a hundred pretensions, a rotting façade of honour crumbling in her wake. And finally the world beheld bare men, stripped by an invisible woman who claimed at last her voice.

The king in Kochi was horrified. He ordered the case be closed, and closed himself from hearing any more names. Sixty-four men had fallen by then. Was the 65th the king himself?

Savitri was nonchalant. When the trial came to its end, she turned to her questioners and said, “If you seek more names, seek answers from my aunt” — a middle-aged widow who, it was said, aided her scandalous perversions. She spent the rest of her life paying the price, even her servants refusing to approach her. A generation was doomed, and all pride was lost.

An unborn child too suffered — a little girl whose father had shared Savitri’s bed. She died a spinster, a tragedy aged 70, every day a reminder of sin. But Savitri disappeared. Her father’s house disowned her, and where that house stood ruins came to be. Her husband’s house disowned her, collapsing under the weight of its ignominy. Many heads hung in shame. But Savitri’s was not among them. She went out into the world, never to be seen again.

Some say she crossed the hills into Tamil country, liberated by an Anglo-Indian who offered her a home. Some say she married a Muslim. All we can know is that she was free. She destroyed the purity of the ponds, bathing instead in revenge.

The Namboodiris were shaken out of their stupor. Enough, they said: it was time to change. Men called for education. Women began to speak: Arya Pallom thundered before ancient men; K. Devika entered the halls of legislature; and Lalithambika told stories of painful truths. Men threw on shirts, and women colourful blouses. Widows took husbands. The parasol was discarded. The years passed, and other battles emerged to be fought. But somewhere amidst all this was whispered the name of the whore, tinged with fear, but with an ocean of awe. The whore had died but her voice had remained.

The writer, who wrote the award-winning The Ivory Throne, when not writing is busy trying to make a mean ‘meen pollichathu’.