SC: Anticipatory bail can be given till completion of trial 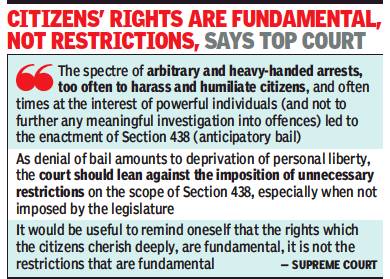 ‘Court’s Power To Give Bail Can’t Be Curtailed’

In a ruling with wide-ranging implications, the Supreme Court on Wednesday said as arbitrary arrests continue to be pervasive, the discretionary power of courts to grant anticipatory bail cannot be curtailed and such protection can extend till the end of trial.

Pointing to arrests during the freedom movement when people were jailed for protesting against British rule, the SC lamented that arbitrary arrests are still common with ordinary citizens bearing the brunt while the interests of powerful individuals are protected. Adjudicating on the extent of protection to an accused under anticipatory bail, a five-judge Constitution bench of Justices Arun Mishra, Indira Banerjee, Vineet Saran, M R Shah and S Ravindra Bhat unanimously held that there should not ordinarily be a limited or a fixed period for such an order.

“The spectre of arbitrary and heavy-handed arrests, too often to harass and humiliate citizens, and often times at the interest of powerful individuals (and not to further any meaningful investigation into offences) led to the enactment of Section 438,” the court said. Provision of anticipatory bail under Section 438 was introduced when CrPC was amended in 1973.

“Arbitrary and groundless arrests continue as a pervasive phenomenon. Parliament has not thought it appropriate to curtail the power or discretion of the courts in granting pre-arrest or anticipatory bail, especially regarding the duration,” Justice Bhat said.

In this context, the bench said it would not be in the larger interest of society if the court, by judicial interpretation, limits the exercise of such power. Justice Bhat warned that the danger lay in the discretion of the courts, advisedly kept wide, shrinking to a “very narrow and unrecognisably tiny portion”, frustrating the objective behind the provision. The court noted that it had stood the test of time and referred to the colonialera Jallianwala Bagh massacre and other incidents where protesters were brutally suppressed and jailed for long.

The bench said anticipatory bail does not end generally at the time and stage when the accused is summoned by court, or after framing of charges, but can continue till the end of trial. “However, if there are any special or peculiar features necessitating the court to limit the tenure of anticipatory bail, it is open for it to do so,” the bench said.

The bench said that Section 438 amounts to parliamentary acceptance of the crucial underpinning of personal liberty in a free and democratic country. “Parliament wished to foster respect for personal liberty and accord primacy to a fundamental tenet of criminal jurisprudence, that everyone is presumed to be innocent till he or she is found guilty,” it further said.

Justice Bhat said, “In conclusion, it would be useful to remind oneself that the rights which the citizens cherish deeply are fundamental — it is not the restrictions that are fundamental.”

Chhattisgarh HC on Wednesday granted anticipatory bail to former CM Ajit Jogi and son Amit in connection with a fresh FIR lodged in February 2019 for probe into the ‘Antagarh bypoll fixing scandal’ of 2014. In September 2019, a local court rejected the anticipatory bail pleas of the two, prompting them to move HC. The Jogis’ counsel Surendra Singh and Vivek Sharma told TOI that Justice Arvind Chandel on Wednesday accepted the anticipatory bail pleas on the ground that, prima facie, there is no offence against them under IPC sections 406, 420 and 120-B. They argued that the original tapes have not been recovered yet and those that are recovered have been doctored. The fresh FIR filed in February 2019 is far too delayed, they said. TNN

Karnataka - Unwarranted hysterectomies ,a tale of exploitation
SC extends anticipatory bail of Teesta till Oct 15
Call for support Justice for Suja Jones for taking on French Husband and Child X
India's bank frauds under Modi rose by 90%; in Gujarat 177%; in Tamil Nadu 229%, in West Bengal 667%...