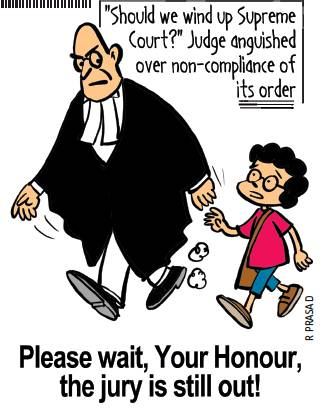 A three-judge bench of the Supreme Court headed by Justice Arun Mishra said it was “anguished” at how its deadline for payment of adjusted gross revenue (AGR) dues was not met and the way a telecom department official effectively stayed its order.

“I don’t get angry like this, but I am totally lost how to work in this system and this country,” Mishra said.

“A desk officer overrides our orders. His order prevails in this country, not ours? He must explain his conduct and apologise. This is the outcome of money power,” he said, suggesting “collusion” between the officer and the telecom companies.

“We don’t know who is creating this nonsense,” Mishra went on. “ I feel I should not work in this court and in this system. I am very anguished.”

He was reacting to a telecom department official issuing a notice to circle officers asking them not to take coercive action against telcos that hadn’t paid up the AGR dues by January 23 deadline.

“How can a desk officer do this to the Supreme Court’s order? Is this the law of the country? Is this the way you treat the courts?” said the bench, which also comprised Justices S Abdul Nazeer and MR Shah. “This is nothing but a device to oblige the companies. This kind of order could not have been passed by a desk officer.”

Solicitor General Tushar Mehta urged the judge to calm down, insisting that his health was all important and not to record such observations. But Mishra continued to make scathing remarks. “I never bother about myself. You don’t understand me, not even an inch. Your desk officer is staying the Supreme Court order. Is he sitting over the Supreme Court? How?” Mishra said, adding it was “better not to live in this country, rather leave it.”

Mehta apologised before the bench.

“As the solicitor general, have you asked him (desk officer) to withdraw this? News reports are being published. Who is sponsoring all this?” the bench asked. “We have to draw contempt against this man (desk officer) and also against these companies. We had dismissed the review plea and not even a single penny has been deposited yet. We are concerned with the health of judiciary, this country and this system.”

Mehta requested the bench to defer the matter, saying the government would file an explanation about the desk officer. “If you want to avoid us, you do it and we will recuse,” the bench said, unappeased.