SC will not Interfere in The Ongoing Proceedings at Indore HC , Monitoring Compliance of its Feb Order 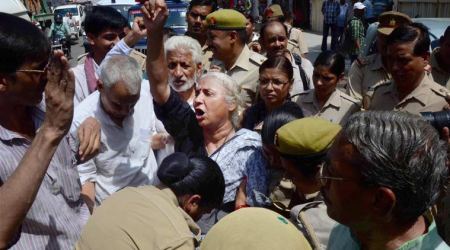 NBA will continue its legal and ground fight till full justice is achieved to all in Narmada Valley
NBA will decide on continued indefinite fast of Medha Patkar and 21 others only after she is allowed full access in hospital. As of now she remains arrested in a Hospital in Indore.
New Delhi, August 8 :  The SLP filed by Bhagirath Dhangar and ors Vs State of MP came today for hearing. The matter was argued by Shri Fali Nariman, Sanjay Parikh and Prashant Bhushan. By order dated 08.02.2017, the Supreme Court had directed rehabilitation of the oustees; SC had also said that the oustees have to vacate, by 31.07.2017, otherwise forcible eviction will take place. As per the said order, entire R&R and work at the rehabilitation sites was to be completed. As R&R was not done as per SC judgments of 2000 and 2005 and the order dated 08.02.2017, some of the oustees had filed writ petition along with 602 interveners in High Court, Indore, Madhya Pradesh.
Against the interim order passed by the High Court, the oustees had filed the special leave petition. The SLP was filed against the orders dated 19.06.2017 and 13.07.2017. in the order dated 13.07.2017, the High Court had sought a report on status of rehabilitation, rehabilitation sites and had adjourned the matter to 01.08.2017.
Today, the Supreme Court at this stage decided not to interfere with the proceedings pending before the Indore High Court as it was against interim orders and the High Court is already monitoring the R&R. As a matter of fact when the writ petition came up for hearing on 01.08.2017, the High Court adjourned it to 10.08.2017, as the SLP was listed today, on 08.08.2017. Now the High Court will continue to monitor R&R where the petition is listed for hearing on 10.08.2017
Narmada Bachao Andolan has complete faith in that justice will be done by the Hon’ble judges of the Court.
After the violent attack and arrest by the MP govt on fasting protesters yesterday, till today the access to Medha Patkar in Indore hospital and Dharmendra Bhai, Pushpa behan and others at Dhar hospital is still restricted. NBA condemns this and demands immediate access. As of now the indefinite fast continues in hospital and also 10 new people have started fasting at the Chikalda village along.
Only when Medha Ji and others are released and allowed full access to her colleagues, a decision on continuing indefinite fast will be undertaken after collective discussions.
We will continue to fight this until justice is done to the 40,000 families in the Narmada Valley.