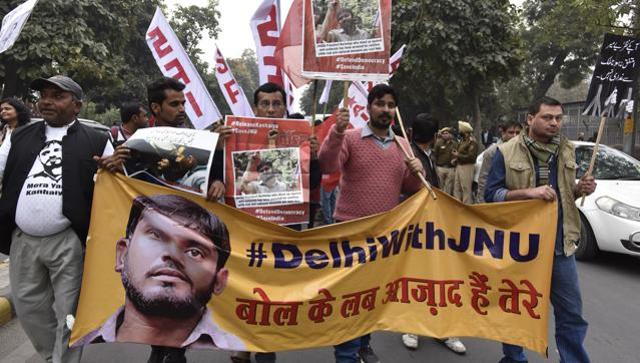 A Rs 10,000 fine was imposed on Kanhaiya Kumar by an appellate authority of the university in connection with a 2016 incident in which anti-India slogans were allegedly raised at an event relating to Parliament attack convict Afzal Guru’s hanging. Former JNU student Kanhaiya Kumar. (File Photo)The Delhi High Court today termed “illegal, irrational and unsustainable” an order of JNU’s appellate authority holding its former students union president Kanhaiya Kumar guilty of indiscipline and imposing a penalty on him in connection with a 2016 incident in which alleged anti-India slogans were raised at an event.

Justice Siddharth Mridul set aside the July 4 office order of the varsity and said the court was of the prima-facie view that the decision was “unsustainable on innumerable counts”, after which the counsel for the varsity submitted that they are recalling the decision.

The court remanded the matter back to the appellate authority with a direction to conduct ‘de novo’ (afresh) proceedings in accordance with the law.

The court listed for August 16 a similar plea by JNU student Umar Khalid, who was rusticated and slapped with a fine of Rs 20,000 in connection with the 2016 incident, as no time was left today to hear the matter.

The JNU counsel said that no coercive steps will be taken against Khalid and some other students, who have also moved the court against the penalty imposed on them by the varsity.

The judge, in his order, said, “I am of the considered view that the impugned office order suffers from vice of illegality, irrationality and procedural impropriety.

“Although the order purports to impose only a fine of Rs 10,000 on the petitioner (Kumar), the action against him constitutes a disciplinary action entailing serious civil consequences for him. In my view, therefore, prima facie the office order of July 4 is unsustainable on innumerable counts.”

When the court started dictating the order, JNU’s counsel said they wanted to recall the office order with liberty to comply with the directions of the high court passed last year in the earlier round of proceedings between the parties, in accordance with the law, culminating in a reasoned order.

“In view of the statement made by the counsel for JNU, the petition is allowed and the office order is set aside. The matter is now remanded to the Appellate Authority to conduct de-novo proceedings in accordance with law,” it said, adding that the court did not find any reasons in the varsity’s order and it was only a reiteration of the findings of an earlier committee.

Kumar had moved the high court on July 17 seeking direction to quash the office order of July 4 passed by JNU through the chief proctor.

He was held guilty for doing an act in violation of discipline and conduct and the fine was imposed on him.

The Rs 10,000 fine was imposed on Kumar by the appellate authority in connection with the incident in which slogans were allegedly raised at the event relating to Parliament attack convict Afzal Guru’s hanging.

During the hearing, senior advocate Rebecca John and advocate Tarannum Cheema, appearing for Kumar, said the last date for submitting PhD thesis is tomorrow and the proctor was not giving him due certificate citing the reason of not depositing the fine amount.

The counsel contended that the varsity has not complied with the high court’s earlier order asking the authorities to give an opportunity to Kumar to cross examine the witnesses who have deposed against him.

John said Kumar had no role in organising the February 9, 2016 event and had gone there to address the gathering to disperse.

“Three notices were issued to Kumar on February 12, 16 and 18 while he was in custody in the criminal case (lodged following the shouting of alleged anti-India slogans on the campus). Notices were sent at my hostel address, how can I appear before the panel when I am in custody? It has been told to them endlessly,” she argued.

JNU’s counsel Ginny J Rautray claimed that a fourth notice was served to Kumar on March 4 after he came out on bail but he failed to appear before the appellate authority on March 8 on the ground that he has received mandate of JNUSU not to appear.

She said Kumar was held guilty of participating in the event and addressing them and not of organising the programme.

Kumar’s counsel claimed that the varsity has passed such an order with a malafide intent to stop him from submitting his thesis.

“We are not enemies. We are citizens of this country and students,” the counsel said.

On February 9, 2016, a poetry event was held at JNU in connection with the third anniversary of Guru’s hanging for his role in the attack on Parliament on December 13, 2001.

A high-level panel of JNU had recommended that Khalid be rusticated in connection with the incident. Besides, financial penalty was imposed on 13 other students for violation of disciplinary norms.

The students had then moved the Delhi High Court, which had on October 12 last year directed the university to place the matter before an appellate authority to review the panel’s decision.

On July 5, the university had revealed that the appellate authority upheld the decision against Khalid and Kumar and in some cases the penalty has been reduced.

Kumar, Khalid and Anirban Bhattacharya, were arrested in February 2016 on charges of sedition in connection with the controversial event and now are out on bail.