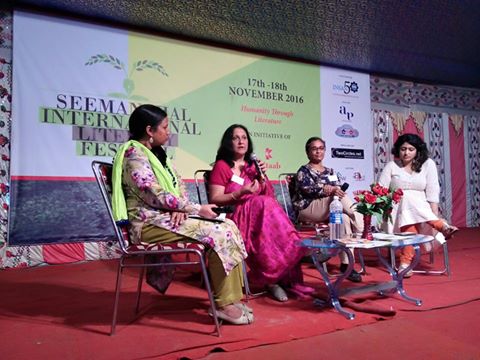 I was surprised when Singapore based English author and publisher Zafar Anjum Emailed me and invited to attend Seemanchal International literary festival on 17-19 November in Kishanganj, Bihar. I kept thinking for hours that how this festival would take shape in one of the most backward regions of our country. On the other hand I was happy over the idea that festival of literature was shifting from superficial glare of metros and lights of hotels to rural India and amid people devoid of cultural activities.

On 16th November, I board flight from Mumbai to Delhi. At Delhi airport waiting for next flight for Bagdogra I met well known Urdu critic Shafey Kidwai and literary critic Nazia Anjum who is also English lecturer at AMU. We shared coffee and talked about festival and Kishanganj. Shafey was worried if there would be any audience, especially to attend sessions about gender discriminations and role of literature in contemporary society on which various foreign authors had to speak.  When we reached Bagdogra airport (West Bengal) we met English author and poet Abha Ayengar, senior journalist Ziya-us-Salam (The Hindu). From West Bengal to Kishanganj our journey was of two hours.  During the journey we saw beautiful tea gardens and green pastures. When Bihar approached greenery turned into dust and road into dilapidated state. We were chatting about festival and thinking what was there in store for next morning.

The venue was famous’ Insan school’ ground and stage was set for two days festival. We were around 20 authors mainly of English, Hindi, Urdu and Malay languages from India, Singapore and UK.  The venue was packed with local people, students, school staff and journalists who welcomed us with garlands and smiles. In his inaugural address Director of SILF Zafar Anjum said that most of literary festivals take places in metros and resort towns while majority of Indians still live in villages and small towns with this realization, we thought that it was time we should took literature to the grassroots. The festival which begins with panel discussion on ‘Reclaiming humanity through literature’, continued in equal zeal and participation of audience for two days. In the festival Singapore based journalist and author P N Balji, Director of British Council inn East & Northeast India Debanjan Chakrabarti,  Chief for Commercial and Business books at Penguin Radom House( India) Milee Ashwarya, Singapore based fiction writer Jayanthi Sankar, Singapore based Malay language writer Isa Kamari,  journalist Percy Fernandez who contributes to The New York Times and South China Morning Post, Hindi author and professor at AMU Dr Kamalanand Jha, Rheea Mukherjee, Abrar Mojeeb and participated and interact with audience.

It was enriching experience that at grassroots India people were thirsty to meet authors and discuss literature, understand aesthetics and share their understanding about socio-political situation. There were two book stalls and people were crowded around to purchase books of their choices. I was glad that along with local readers regional MLA Master Mujahid Alam had bought my novel ‘Teen Novel’ and asked me to autograph the copy. Later, I come to know that Alam was one of the toppers in the University and was an avid reader too. Writers from abroad and different parts of India were excited and overwhelmed by the love for literature and discourse they found in rural India. All of them expressed desire that rural India needs more and more such and other literary festivals and they will attend without hiccup or hesitation.