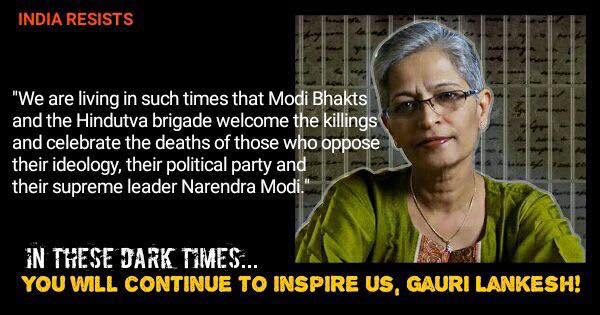 brigade want me in jail’in an interview last year

Gauri Lankesh had been under attack from people with ideological differences.
BENGALURU: Gauri Lankesh, a senior journalist in Bengaluru, has been shot dead at her residence in Rajarajeshwari Nagar.

According to The News Minute, the assailants allegedly knocked on the door of her residence, and shot her as soon as she opened the door. The shots penetrated her chest and she was killed on the spot, reports said.

She ran the weekly Gauri ‘Lankesh Patrike,’ a Kannada tabloid, and had been under attack from people with ideological differences.

brigade want me in jail’

One of the few women editors in language press was convicted on charges of defamation for writing a story against BJP workers. She says the case has more to do with her politics than the story her magazine published.

In 2005, Gauri Lankesh started her own weekly tabloid magazine. She named it Gauri Lankesh Patrike (GLP) and in the past decade, it’s grown to employ 50 people and has a healthy subscription. Earlier this week, one of the stories that had been published in GLP earned Lankesh not just notoriety, but also a jail term.

On November 28, Lankesh, one of the few women editors in language press, was convictedin two cases of criminal defamation filed against a story she’d published back in 2008. The Court of Judicial Magistrates of First Class in Hubballi, Karnataka, imposed a fine of Rs 10,000 on her along with a six-month jail term.

Soon after the verdict, Lankesh applied for bail and is now free. She will be appealing against the verdict in a higher court.

The story from 2008 that earned Lankesh this sentence alleged that three Bharatiya Janata Party (BJP) workers claimed had duped a jeweller of Rs 1 lakh. The incident, Lankesh says, was published in many local dailies, but her tabloid was the only one to name those involved.

According to Lankesh, the report was based on sources within the BJP and the subsequent defamation cases filed by Dharwad Member of Parliament Pralhad Joshi and BJP leader Umesh Dushi are not so much about the story as they are about their dislike for her political worldview – one that is decidedly Left-leaning.

GLP is known for its anti-establishment flavour and reflects some of Lankesh’s concerns as an activist. The magazine does not take advertisements from either governments or corporations. It is run by a team of 50 regular employees and more than two dozen regular columnists and contributors. GLP is financially supported by Lankesh’s other publication firms — Lankesh Prakashana that publishes literature and Guide Prakashana, which concentrates on providing study material for competitive exams.

In an email conversation with Newslaundry, Gauri talks about her case.

Your first thoughts on the judgement? The court has stated that you published the news report against BJP leaders without proof…

Well, I am naturally disappointed with the judgement. The fact that the petitioners managed to cover their tracks and reached a compromise with their victim [the jeweller] does not mean that the attempt to cheat a man did not take place. My sources were from the BJP itself. But as a journalist, it is my right NOT to reveal the names of my sources

What course of action will you be taking next?

The law says I can avail of bail, which I have already done. As per law, the court has also suspended its sentence giving me 60 days time to appeal against the judgement before a higher court, which I shall be doing.

You have earlier come under attack for being a ‘Maoist supporter’ and a ‘Hindu hater’. How do you respond to such criticism?

Unfortunately, today anybody talking in support of human rights and against fake encounters is branded a Maoist supporter. Along with that, my criticism of Hindutva politics and the caste system, which is part and parcel of what is considered ‘Hindu dharma’, makes my critics brand me as a ‘Hindu hater’. But I consider it my constitutional duty to continue – in my own little way – the struggle of Basavanna and Dr Ambedkar towards establishing an egalitarian society.

You have said earlier that ‘certain people want to see you in jail’. Could you elaborate on who these people are?

In Karnataka today, we are living in such times that Modi Bhakts and the Hindutva brigade welcome the killings (as in the case of Dr M M Kalburgi) and celebrate the deaths (as in the case of Dr U R Ananathamurthy) of those who oppose their ideology, their political party and their supreme leader Narendra Modi. I was referring to such people because, let me assure you, they are keen to somehow shut me up too. A jail stint for me would have warmed the cockles of their hearts!

Anyway, last night when I was boarding the train back to Bengaluru someone called me and said that I was ‘trending’ on Twitter! (I did not know about this since I am not constantly hooked on to the Internet.) I was shocked by the ridiculousness of the whole thing. ‘Trending’ because of a defamation case? I burst into laughter.

When I looked at the tweets and the kind of comments that were made about me, I was alarmed. One, because the tweets showed the rabid hate the Hindutva brigade and Modi Bhakts have for its critics and naysayers. Two, most of the tweets were targeted against liberal/Left journalists/journalism. Both those factors made me fear for the freedom of expression of the fourth estate in our country today in a larger context and not just in the personal sense.

As a journalist currently fighting a defamation case, do you think criminal defamation laws in India are against the spirit of freedom of media?

Yes of course, I think criminal defamation laws should be scrapped.