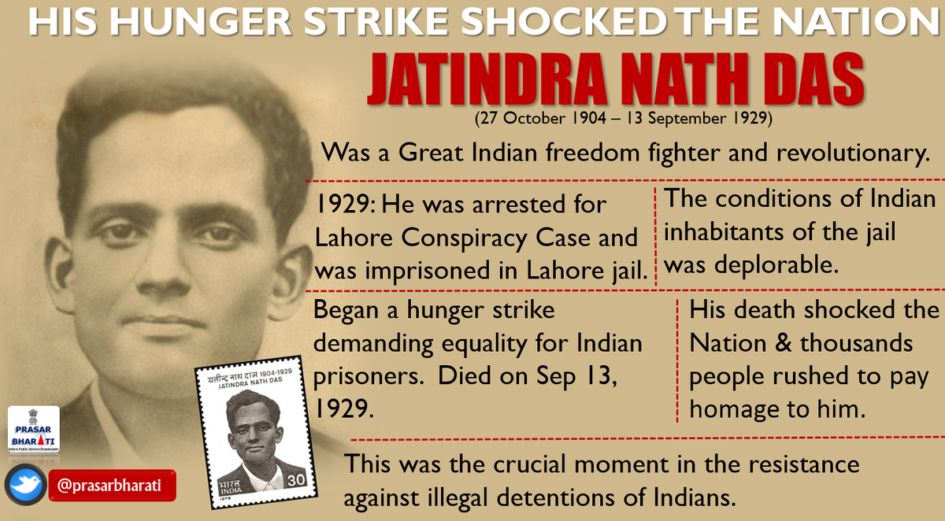 The bravery and sacrifice of Jatindra Nath Das continues to be celebrated years after his death, his story continues to inspire.By

Jatindra Nath Das was a valiant freedom fighter and comrade of Shahid Bhagat Singh who sacrificed his life at the age of only 25 in Lahore Jail on September 13, 1929.

Jatindra Nath Das was a very courageous and determined freedom fighter who accepted the most painful sufferings with a smiling face for the ideal of freedom of India. He achieved martyrdom at the age of only 25 on September 13, 1929 in Lahore jail.

He was a brilliant student but chose to dedicate his life to freedom movement. While doing his BA he was arrested and sent to Mymensing Jail. Here he as well as other arrested freedom fighter prisoners were treated very badly. Even at this very young age Jatindra Nath mobilized freedom fighter prisoners and went on an indefinite fast. This had the desired impact in terms of the jail authorities agreeing to improve conditions for political prisoners.

Some time after his release Jatindra joined the Hindustan Republican Socialist Association. When Bhagat Singh and several other comrades were in Lahore jail, Jatindra too was arrested and together these freedom fighters started a fast for the rights of political prisoners. The fasting political prisoners were treated very harshly. As a result Jatindra became seriously ill. Paralysis started spreading to parts of his body. A jail committee recommended his release but the colonial government did not agree. Finally on 13 September 1929 he breathed his last after fasting for 63 days. As his dead body was taken to Calcutta, several hundred thousand people including several national leaders gathered to pay homage to him.

Thus although he had a very short life of only 25 years, he was jailed twice for fighting for a noble cause and on both occasions he converted his jail-stay into a struggle for the rights of political prisoners. Amazingly, keeping in view the hostile conditions, on both occasions the struggle made a big impact, in the second instance a huge national impact.

Hence it will be an appropriate tribute to the memory of Jatindra Nath Das ( as well as other comrades who participated in these fasts and struggles) if September 13, the martyrdom date of Jatindra Nath Das, is observed as Justice for Political Prisoners Day not just in India but also abroad, particularly in South Asia. There is certainly need for this as there are still many political prisoners who face injustice and atrocities.
In particular, it should be emphasized that there should be no capital punishment or death sentence for political prisoners. Those who face serious health problems should be released. This is all the more important now in Covid times.

Jatindra Nath Das would not have died if the recommendation of the Jail Committee for his release at the time of his deteriorating health had been accepted. Some of the noblest citizens and in particular youths died untimely death during colonial rule because of death sentence for freedom fighters and fast decline of health due to poor living conditions as well as torture and beatings in jail. Some of those who died in this way like Bhagat Singh, Ramprasad Bismil, Ashfaqullah Khan, Kartar Singh Sarabha and Jatindra Nath Das would potentially have become some of our greatest national leaders if they had not died at such a young age. To honour memories of freedom movement India should respect the human rights of political prisoners. This includes recognition as political prisoners and providing them special conditions of protecting health and dignity, contacts with the outside world as well as suitable conditions for study and reflection.

He was known to be a very good student at school and later at college. He combined his studies with working in two streams of the freedom movement. He participated with enthusiasm in the non-cooperation movement led by Mahatma Gandhi. At the same time he was also active in the work of the revolutionary movement.

The police arrested him soon after he joined college. He was imprisoned in Mymensing jail. Here he as well as other freedom fighter prisoners faced very hostile conditions. In an amazing display of courage, even after being put behind bars this young man started a struggle within jail for improving the condition of political prisoners and went on an indefinite fast. No less amazing is the fact that despite all the repression of the colonial government he actually succeeded in his efforts and the fast ended when the jail administration agreed to make some improvements.

On his release after some time Jatindra came in contact with Bhagat Singh and his comrades and started working with them in the Hindustan Socialist Republic Association. He soon gained recognition as a very trusted and dedicated member. In the late 1920s  the police arrested several revolutionaries. Jatindra Nath Das was also imprisoned and this time he was imprisoned in Lahore jail with Bhagat Singh and other freedom fighters of this group. They were very eager to use the prison and the courts to spread their message of freedom movement. Realizing this the jail administration unleashed repression on them and denied basic rights of political prisoners.

Hence these freedom fighters including Jatindra started indefinite fast to press for basic rights of political prisoners. This  brought more repression from jail authorities. The authorities tried forceful feeding of fasting freedom fighters. Jatindra was ill and this attempted force feeding further damaged his lungs. Still he continued his fast. The news of his deteriorating health started reaching various parts of the country through statements made by visitors and news reports. Paralysis started spreading to parts of his body. A jail committee recommended his release but fearing his influence among people the colonial government did not agree. Finally he died on September 13, 1929.

A wave of anger and distress swept the country. Over fifty thousand people came out in the streets of Lahore very soon to join the last journey of the martyr. Durga Bhabhi, leading member of revolutionary party, appeared suddenly to travel with the body which was to be taken to Calcutta from Lahore. All along the route thousands of people gathered at railway stations like Allahabad and Kanpur to pay their last respects. Those who led the huge crowds of people paying homage included Jawaharlal Nehru, Kamla Nehru and Ganesh Shankar Vidyarthi. The body was received in Calcutta by a huge procession of people led by Subhash Chandra Bose. Around 7 lakh people are estimated to have joined the last journey of Jatindra Nath Das in Calcutta.

This speaks for the very high inspirational role of this young freedom fighter who died at the age of only 25 years. Many, many people felt inspired by him to contribute more and more to the freedom movement. The contribution made him to protecting and promoting the important cause of political prisoners is also very important.

As many political prisoners still undergo a lot of suffering and denial of basic rights, the inspiring struggles of Jatindra Nath Das and his sacrifice are increasingly being remembered and there is a trend towards observing his martyrdom day—13 September—as Justice for Political Prisoners Day