Seven straight rejections – Vedanta not to return to Niyamgiri for Mining 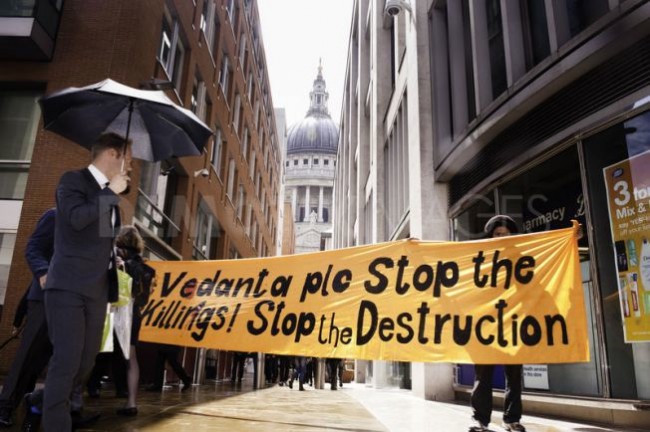 A Dongria Kondh tribal sitting outside the meeting venue reacts to the camera (photos: Sayanta Bera)

Broken sewing machines could be seen strewn around as rains poured down over the tribal and dalit hamlet of Phuldumer on Monday and its palli sabha (village council) gave its verdict on mining proposed in the Niyamgiri hills. It was the seventh straight rejection for Vedanta Aluminium Limited, the London stock exchange-listed metals giant, which wants the Niyamgiri hills in Odisha for top quality bauxite. The sewing machines to stitch leaf plates were given to the forest village as part of Vedanta’s corporate social responsibility (CSR) activities through its Lanjigarh refinery located on the foothills of Niyamgiri hill range. Along with dismantled solar panels, the CSR goodies stood as a stark reminder of a failed attempt at breaching the feisty Dongria Kondh territory.

The palli sabha in Phuldumer in Kalahandi district saw the largest attendance so far—49 of the 65 listed voters were present to voice their opinion. Six village councils—Serkapadi, Kesarpadi, Tadijhola, Kunakadu, Palberi and Batudi—had unanimously rejected the mining proposal earlier this month, asserting that digging the hills will dry up perennial streams, destroy their forest-based livelihood and their supreme deity and ancestral kin, Niyamraja, the preserver and protector of the hill range.

Vedanta wants 660 ha of Niyamgiri hills to feed its Lanjigarh refinery criss-crossing Kalahandi and Rayagada districts of Odisha. On April 18, the Supreme Court asked the forest dwellers from Niyamgiri ranges to take a final call [2]  if bauxite mining will infringe on their religious and cultural rights. Pursuant to the apex court order, Odisha government drew up a list of 12 “likely to be affected” villages to take a final call.

With Phuldumer’s decision, a majority of the 12 villages that are being officially consulted have rejected the mining proposal. As Vedanta Resources’ Annual General Meeting (AGM) will be held on August 1 in London, “shareholders at the AGM should now ask serious questions as to why the company continued to pursue the project despite evidence of the harm it would cause to indigenous people,” said Ramesh Gopalakrishnan of Amnesty International who witnessed several of the village council meetings.

The mood at Phuldumer was set by Ratu Majhi who told the district judge and observer to the proceedings, “these hills are for us what Konark or Jagannath temple is to you. The mining site is the abode of our god. We cannot buy water and cannot let our streams dry up due to mining.”

Taking a dig at Vedanta’s CSR activities, an angry Mahadev Nayak said, “we will burn down anything we see from Vedanta here.” An elderly woman Sitari Majhi compared the state and Vedanta to a big tiger ready to pounce on them.

Midway through the meeting, some fifty odd Dongria Kondh tribals left the venue after hearing that security forces stopped a group from Khambesi (in Kurli panchayat, Rayagada district) from reaching the palli sabha venue. Tempers soared as angry tribals rushed to get the 27 odd visitors who paid Rs 3,000 and lugged themselves on a jeep to reach Phuldumer. “If you have your gun, I also have my tangiya (axe),” blurted a Dongria Kondh to an Indian Reserve Battalion recruit. Later the state police did a balancing act to get the visiting group to the venue. By the time they reached, the meeting was over.

‘Does each of you want to speak or shall we put everyone’s statement together?’ asked a panchayat official

Gauging the mood, the panchayat officials and the judge asked villagers to agree to a unanimous resolution rather than each of the 49 speakers taking turns at the mike and have their views translated from Kui, the tribal dialect, to Odiya, to save time.

After the meeting, this correspondent met Mamata Majhi at her house on the edge of the hamlet. Mamata is three months pregnant and she is suffering from fever for over a week, her symptoms suggesting malaria that is commonplace in the Niyamgiris. The remote forest terrain and lack of roads means no medical access. Despite repeated requests Mamata refused to come with us to the nearest government facility at Lanjigarh. The mistrust of outsiders runs deep.

Mamata Majhi, three months pregnant, will not visit the nearest public health facility despite running a fever for eight days

I ask Lado Sikaka, the leader of the Dongria Kondh, why they don’t ask for medical facilities inside the forests. “We don’t want anything from a durniti sarkar (corrupt government) which wants to sell our forests for mining. We’ll see if another government comes but it has to first assure no one will touch our hills,” he said. Sikaka recovered from a bout of malaria a day before.