Sexist ya feminist? Whose selfie is it anyway? #SelfieWithDaughter 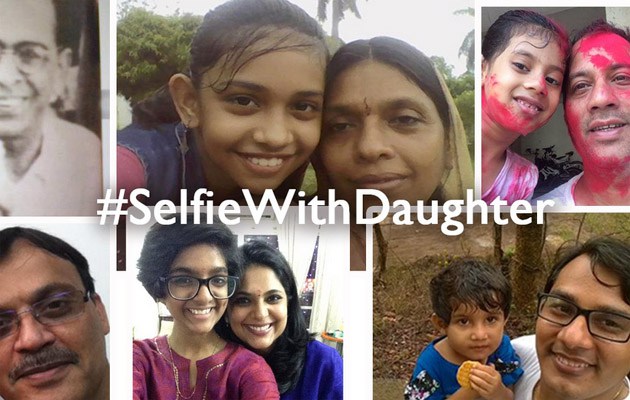 No pout please: The selfie is both celebrated and derided.

In its brief existence — pictures with the hashtag selfie first showed up on Flickr in 2004, going viral only with the coming of front-facing cellphone cameras — the selfie has been both celebrated and derided. Some consider it the ultimate expression of our narcissistic age; others, liberated, liberating self-expression. Because women, more than men, have taken to the selfie like a duckface to water so to speak, arguments around whether the selfie is sexist or feminist have been particularly pitched. Because women also use them to express a certain sexual freeness, selfies have caused lips to purse equally on the left and the right of the political divide.

In 2013, when Selfie entered the Oxford English Dictionary, an argument broke out in the world of online feminism. The American feminist zine Jezebel wrote: “Selfies aren’t empowering; they’re a high tech reflection of the fucked up way society teaches women that their most important quality is their physical attractiveness.”

Enraged responses followed, particularly from feminists of diverse race, and another zine, The Feminist Griote wrote: “The media invests an extreme amount of time and money to ensure that all women…feel pressured to look like the one version of beautiful allowed by society. Social media allows for people of color, queer folks, fats, femmes, trans* folks, and differently-abled folks to (create and) find proper representation of ourselves sans gatekeepers.” It may be true that many women’s selfies merely reinforce stereotypical notions of sexual attractiveness — the porno-influenced duckfaces, and squished breasts, the offered up lips. But it’s also true that many women use selfies to create self-images that are variously humorous, artistic, deliberately ugly or plain, commemorative, joyful or pretentious.

What this tells us is that the selfie is a constructed reality of the self. It does contain elements of the real, the authentic and the spontaneous. Yet it is also consciously designed, and obviously performed. We communicate how we would like to be seen using a mixture of actuality and symbolism. The selfie is not artless documentation, but rather an expression of who we feel we are at that moment; a version of ourselves in which we reveal something — but also conceal something. It is the opposite of a candid photo taken by someone else, resonant with an inner truth or desire, highly aware about the symbolic power of images – their ability to communicate many ideas simultaneously. Because of its self-defining power, the selfie has been especially popular with women, so often represented through someone else’s lens.

So, it is very interesting that when PM Modi recommended we take up the #SelfieWithDaughter campaign, it was mostly men who did so. In the sea of father-daughter selfies, we saw few pictures of mothers and daughters.

The #SelfieWithDaughters campaign originated in Bibipur, Harayana, where the sarpanch, Sunil Jaglan, has been working since 2012 to end sex selection, with good results. The campaign was therefore an affective symbol linked to concrete ongoing political activities and policy changes.

When it was presented nationwide, to an extent this symbol was not offered to us along with a set of political activities. We were not asked to report on illegal amniocentesis, nor told to stop taking dowry, or subjecting our daughters to poor nutrition, shaming and lack of opportunities. Unmoored from a context, the symbol itself became a political activity. It became a political consumer good that would add to our social image like any other consumer good.

That the message was interpreted to be for fathers more than mothers was not surprising. The language of women’s empowerment that emanates from governments — this one as well as others — has always been a paternalistic one, in which daughters are implied to be weak, delicate, gentle and helpless, therefore needing the care of the paternalistic state and patriarchal male relatives. Men will bestow love and care — as a benevolence. Which is nice, but not quite the same as giving women equal rights.

The #SelfieWithDaughters campaign offered people — many of them men — a means of curating an image of themselves as benevolent and progressive while concealing their resistance to altering the status quo, the structures and attitudes which will create a genuinely, vibrantly equal society. They constructed this idea in relationship to an implicit construction of the kind of woman worthy of this love and care.

As the columnist Sandip Roy perceptively pointed out — that benevolence is for the woman who conforms to the image of gentle, forever smiling, dependent womanliness. A woman who goes outside these lines — as the activist Kavita Krishnan and the actor Shruti Seth did — evokes misogyny and vitriol, not respect. The story of this selfie campaign is a painful one. Like in the photo someone else takes of you, women must conform to an image created by others. Their own version of themselves is not palatable. Apparently all selfies aren’t equal in the business of empowerment.