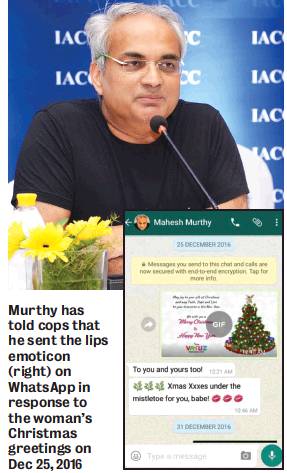 Angel investor Mahesh Murthy has said in statements to police that he never met the Delhi-based complainant, only sent her a WhatsApp message that is being held against him

Angel investor Mahesh Murthy, who has been booked by Mumbai police for allegedly sexually harassing a Delhi woman, has told police that he has never met the complainant and that just one WhatsApp message — in which he reportedly sent her lips emoticons that many associate with kiss — is being held against him.

An FIR was lodged against Murthy, founder of Pinstorm and partner in venture capital firm Seedfund, by Khar police on December 29 after the National Commission for Women (NCW) intervened on the basis of complaints received from the victim and other women. Despite several past accusations of sexual misconduct against him, this is the first time a formal complaint was filed against Murthy.

Khar police have recorded the statements of both sides and are now gathering evidence to file a chargesheet in the case. The police said that they recorded Murthy’s statements twice and on both occasions, he denied knowing the complainant, who has accused him of making objectionable, derogatory and sexual remarks and obscene signs.

In his statements to police, Murthy said that he came to know the lady through a LinkedIn group, and had never actually met her. He claimed that they always interacted in groups as he was a financer and the woman was setting up her own start-up.

“On 25 December 2016, the lady sent me Christmas greetings via WhatsApp and I replied with the lips emoticon. She found this message objectionable and started venting her anger on social networking sites. When I came to know about it, I apologised to her and she accepted it,” a Khar policeman quoted Murthy as saying.

He also told the cops that he had sent the same message to other people in the LinkedIn group and that he never intended to hurt her. “But when things took an ugly turn, I filed a defamation case against the woman in a Delhi court in January 2017. The court issued a restraining order, asking her not to say anything defamatory against me anywhere. It was after this that she complained to the NCW,” Murthy reportedly told police.

He has got interim relief from a Mumbai court till January 30.

Meanwhile, the woman has submitted the details of her chats with Murthy to police. She has also said that she found the kisses emoticons that Murthy sent her objectionable.

In one of the social networking sites, the woman had written, “I wished Mahesh Murthy Merry Christmas n a new year I got a response something like that. Unfortunately my LinkedIn app allows me to add only one picture but I want to know from my fellow entrepreneurs and investors do we deserve this? So next time when you talk to investors you should mentally prepare yourself.”

Soon after her outburst, other women came up with similar allegations against Murthy. The police are now trying to contact those ladies, who had also share their bitter experiences on social media. “Two of them promised to come forward and record their statements, but till now, no one has turned up. We are waiting for their response,” said an officer from Khar police station.

Earlier a woman author had accused Murthy of sexual harassment 13 years ago, which he had denied as “absolute and complete lies”. This apart, a central government lady officer had alleged that Murthy had reached out to her for some professional advice last year and then around Diwali last year, sent her inappropriate electronic messages.

In 2013, a US national had made a similar allegation dating back to the time she had met Murthy in a coffee shop in Mumbai. She had posted that Murthy repeatedly brought up the topic of sex during their conversation, and tried to touch her several times. A student of SIES College, too, had said Murthy behaved inappropriately with her during a meeting at Taj Land’s End hotel in Bandra in 2003.

“A case has been registered against him under section 354 (D), 509 of IPC and under section 67 of IT Act,” said Ramchandra Jadhav, senior police inspector, Khar police station.

Murthy has told cops that he sent the lips emoticon (right) on WhatsApp in response to the woman’s Christmas greetings on Dec 25, 2016