Schools have been notoriously known to be sites of indoctrination, where students are taught how to accept the status quo rather than how to stand against it. Our own personal anecdotes would stand testimony to the sexist, casteist attitudes of the people who run schools. From slut shaming little girls for the length of their skirts to bringing caste privileges and biases into the classrooms, the institution of schools along with families are the initial spaces of misogynistic and casteist learning for children.

The recent allegations of sexual harassment by students from a prominent school in Chennai bring under glaring spotlight sexism and casteism as institutionalised practices. Students have recounted horrifying incidents of sexual harassment by C. Rajagopalan, who has reportedly been teaching at Padma Shashadri Bala Bhavan (PBSS), KK Nagar branch for over 20 years. Allegations were first collected by Kripali, a former student, on her Instagram account and are now visible on her story highlights. The allegations include unwarranted touching, unsolicited messages and sexually charged inappropriate behaviour. 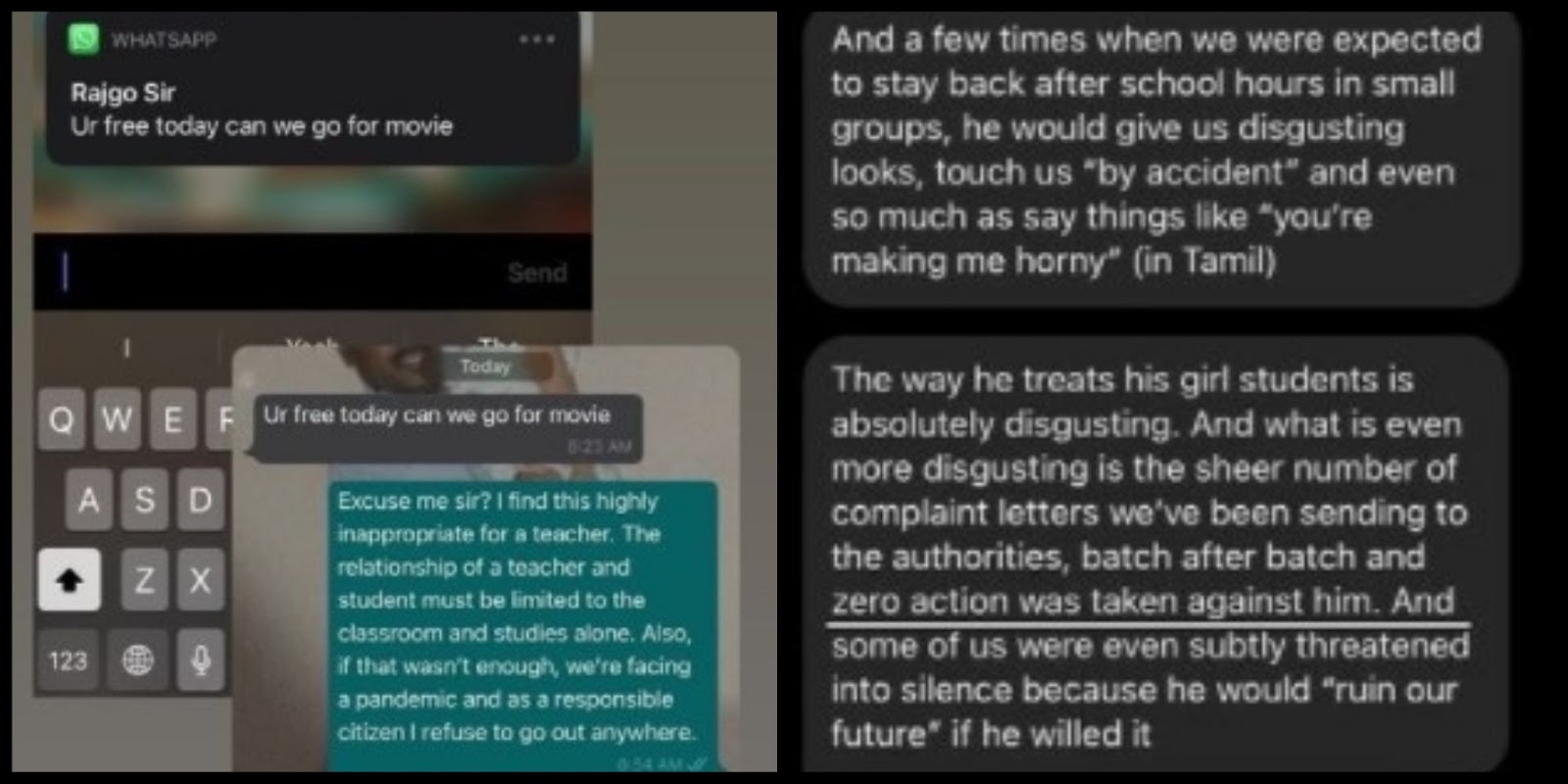 Despite the students’ claims that they had reported these incidents to authorities, no action was taken. In an initial notice the school authorities had claimed they had received no complaints which they changed to ‘no written complaints’ in a later notice. The allegations were initially refuted by the school authorities, however, after the social media uproar they decided to take suo motu notice of the allegations and take the required action against Rajagopalan.

Reports of Caste based discrimination also came to the forefront as students tweeted about their experiences. Former student Greeshma Kuthar wrote about caste-based sexual harassment and rape threats she received from her Brahmin classmates. Another former student spoke about how they were forced to sit on the floor because their lunch included eggs.

Horrifying incidents such as these must force us to invert the lens and look within our own lives and practices. As a Savarna Upper-Caste woman, I can now look at my own education and the intricacies of caste politics within it. In my liberal urban school, caste was supposed to be absent. We were taught myths such as caste does not exist in Urban spaces and girls are now equal to boys. Our practices, however, were different. Girls were often reprimanded for their hair out of place, humiliated by the ripping of their skirt hemlines if the skirt was above knee length. Caste was visible not through our surnames as much as through our food habits, the odour of our classmates, the invisibility of prominent anti-caste leaders in our history and political science textbooks and through the socio-political positions of our teachers themselves.

Perhaps one of the most damaging aspects in educational institutions is the culture of silence. One of the most important tenets of life that children are taught is shame. Keeping quiet and following instructions are qualities that bring praise while ‘distracting’ behaviour warrants punishment. To know, as we do now, that school authorities at PBSS were aware in some capacity or the other of the reality and trauma being inflicted on their students and took no action until their dirty laundry hung high up in the air brings us to the overarching question: why do institutional reputations always trump human dignity and safety?

*Isheeta is a features writer and a student of Gender Studies at Ambedkar University, Delhi. She enjoys dissecting popular culture through a gendered lens, adding new books to her overflowing book rack and sipping coffee in quiet corners. She is currently an Intern at Kractivist.org.