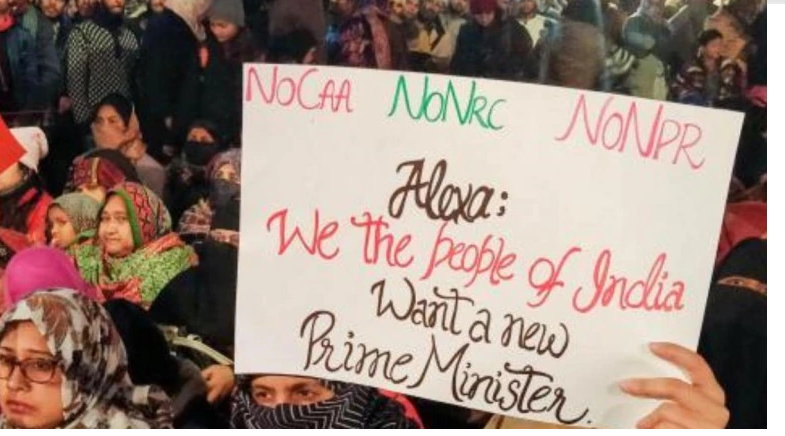 Habibullah, in his affidavit, further stated that it was the barricading of unconnected roads by the police, and not the protest itself, that led to commuting woes near the site.

SC-appointed mediators during their discussion with Shaheen Bagh protesters. ANI

Habibullah and Supreme Court lawyers Sadhana Ramachandran and Sanjay Hegde were appointed last week by the apex court as interlocutors to reason with demonstrators to shift the venue from Shaheen Bagh. The interlocutors have held four rounds of meetings with protesters since 19 February.

In his affidavit, Habibullah said that the protest was a form of “peaceful dissent against the CAA-NRC-NPR”, the legislations which they saw as a threat to their survival and that of their future generations, Live Law reported. “The ladies at the site include the old, middle-aged and young, along with little children. The assembly is peaceful,” the report said.

Debunking reports about the inconvenience being caused by the protest, Habibullah wrote that the people “came out to protest out of desperation” despite “blanket threats to their lives”. The report states, “They have emphasised that they sit in protest every day facing threats of attacks as well as actual attacks, including shots being fired and constant vilification.” An incident of firing was reported last month at the Shaheen Bagh protest site.

The affidavit read that none of the residents or shopkeepers objected to the protests and rather empathised with the citizens of India who were “deeply hurt to have been labelled as traitors by political parties”. According to Habibullah’s findings, “the protest site at Shaheen Bagh provides them with security as it is flanked from all sides and emergency vehicles are given immediate and safe passage.”

In his report, Habibullah also held the police responsible for commuters facing traffic woes near the protest site. The police placed barricades on parallel and adjoining roads, despite having no connection with the protest site, leading to inconvenience and chaos for commuters on the south east Delhi and Noida stretch, the affidavit read. Habibullah also suggested that the police should reveal the names of those behind the decision to block parallel and arterial roads instead of regulating the traffic.

As per the report, the roads that have been blocked unnecessarily include the 40-foot-road as well as main road leading to Jamia, New Friends Colony etc. from the roundabout of Kalindi Kunj Metro station, blockades towards Okhla, access to Noida on the Expressway to Delhi and Faridabad and access from Akshardham Temple on the Yamuna Bridge, among many others.

In his affidavit, Habibullah has stated that police have blocked five points around Shaheen Bagh, reported ANI. The blockade has led to massive traffic jams in and around Ashram and parts of south Delhi, with other Noida-Delhi connections, straining alternate routes between south east Delhi and Noida.

#ShaheenBaghProtest : Ex CIC Wajahaj Habibullah, one of the interlocutors appointed by SC has filed an affidavit in the Court on the protest.

Hearing is scheduled to be held tomorrow by a two-judge bench#CAA_NRC_Protests pic.twitter.com/um0AFojP7z

In the latest round of talks held on Saturday, protesters asked that the Supreme Court guarantee their safety before one bound on Road 13A is opened up and that the police cases against residents of Jamia Nagar in connection with anti-CAA protests be withdrawn. On Friday, protesters asked interlocutors why they were being asked to vacate the area when there were other roads too connecting Delhi and Noida, apart from blaming the police for blocking roads.

“When we checked the roads, we noticed that many roads are open, which were blocked by the police. I am very upset to say that the Noida-Faridabad road, which was opened on Friday, was again closed by the police. Whoever has done this is now answerable to the Supreme Court,” Ramachandran had said on Friday.

When the interlocutors spoke to the SHO about the security of the protesters, the demonstrators at Shaheen Bagh chanted, “Delhi Police par bharosa nahi (we don’t trust the Delhi Police).”

By Saturday night, Road Number 9 was opened by the protesters, allowing passage of vehicles on the stretch between Noida and south Delhi. Around the same time, around 500 people, mostly women, gathered near the Jaffrabad metro station to protest CAA, prompting Delhi Metro authorities to close the entry and exit gates of the station.

Shaheen Bagh protests began in December after the passage of CAA. Earlier this month, the Supreme Court had issued notice on a plea seeking clearance of Shaheen Bagh protesters from Delhi, while upholding the people’s right to protest. The next hearing in the matter is scheduled to be held on Monday by a two-judge bench.

Resist the silent emergency! Call for Action on June 26th 2012
India - Don’t forget the danger of digital black money
#India - No lessons learnt- The Muzaffarnagar riots could have been controlled
India - Right to health if implemented, would be a game-changer