Alternative legal redress systems are needed and welcome. But, as debate in the UK has shown, sharia councils are the preserves of clerics who are intolerant of women’s equality and rights. 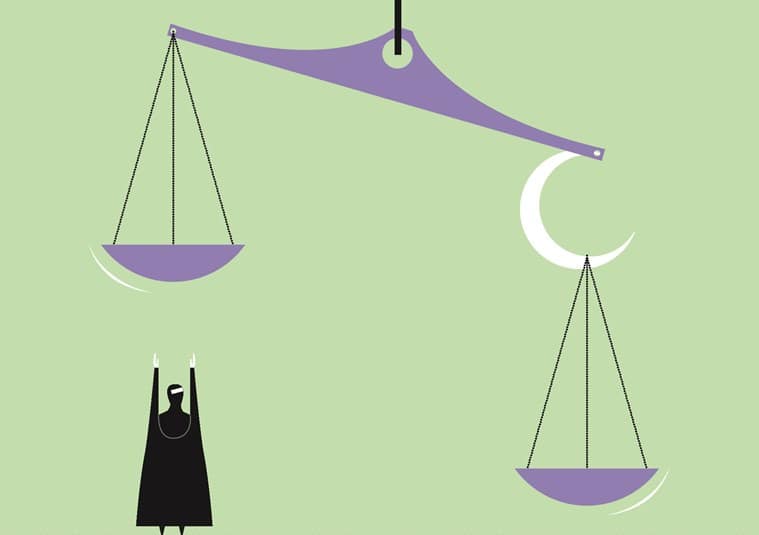 Justice from India’s courts of law is a long-drawn and costly process, making justice beyond the reach of India’s poor. An alternative dispute redress mechanism may be a great idea. (Illustration: C R Sasikumar)Call it bad news when the theocrats of the All India Muslim Personal Board announce their intent to dot the country with sharia courts to arbitrate family disputes. But what does one say when, not for the first time, Faizan Mustafa, a senior law teacher, renowned jurist of constitutional law and vice-chancellor of NALSAR University of Law, Hyderabad, weighs in on the side of those who preach that triple talaq (instant divorce), nikah halala (a divorced woman must marry another man, sleep with him for a night, then get divorced in order to reunite with her former husband) and polygamy are “Allah’s laws” which none dare question till doomsday come?

In his article, co-authored with Mahendra Shukla (‘Justice more accessible’, IE, July 16), Mustafa propounds the idea that “sharia courts are an alternative dispute redressal mechanism that responds to the decline of the civil justice system, and addresses the needs of the poor”. In support of their contention, the authors state: “The decline of the civil justice system is a major phenomenon of our times. In fact, alternative dispute resolution (ADR) mechanisms are the new normal”. Interestingly, Mustafa and Shukla rely on the “latest trends” in the world’s mature democracies to buttress their case: “Thus in 2008, the UK set up five sharia courts whose rulings are enforceable with the full power of the English judicial system”.

The authors need to update their information. Are they unaware that the UK’s sharia councils have been a subject of heated debate with any number of women’s rights and human rights groups citing case after case to allege that “both the intent and the process of the sharia courts is abusive and discriminatory… and promote the full range of fundamentalist goals such as strict gender segregation, imposition of hijabs and other dress codes, homophobia, bigotry and discrimination against non-Muslims and Muslim dissenters, blasphemy laws and attacks on apostates.” Haven’t the authors heard of the UK’s spirited “One Law for All” campaign which has drawn worldwide support? Do they not know that faced with a barrage of protests, in May 2016 the then home secretary, Theresa May, was forced to appoint a Review Committee to examine “whether, and the extent to which, sharia law is being misused or applied in a way that is incompatible with the law of the land?”

It turned out to be a false start. The four-member review committee was headed by a theologian (Mona Siddiqui) with two Muslim imams as advisors. This led to the allegation that nothing more than a “whitewash” was intended. In an open letter to the (by then) Prime Minister Theresa May in July 2016, hundreds of women’s human rights organisations and campaigners warned against “a further slide towards privatised justice and parallel legal systems”.

Have Mustafa and Shukla not heard of the statement issued by over 300 abused women in December 2016 opposing sharia councils and religious bodies? Here is some of what they said: “We are women who have experienced abuse and violence in our personal lives. Most of us come from Muslim backgrounds, but some of us come from other minority faiths. Many of us are deeply religious, but for us, religion is in our hearts: a private matter between us and our God”.

“We are compelled to voice our alarm about the growing power of religious bodies such as sharia councils and their bid for control over our lives … We know from personal experiences that many religious bodies such as sharia councils are presided over by hard line or fundamentalist clerics who are intolerant of the very idea that women should be in control of their own bodies and minds. These clerics claim to be acting according to the word of God. But they are often corrupt, primarily interested in making money and abuse their positions of power by shaming and slandering those of us who reject those aspects of our religions and cultures that we find oppressive. We pay a huge price for not submitting to domestic violence, rape, polygamy and child abuse and other kinds of harm.”

“We struggle to fit into this country and to educate our children, especially our daughters, and to protect them and give them a better life. We struggle to have our experiences of violence and abuse addressed properly in accordance with the principles of equality and justice for all. We do not wish to be judged by reference to fundamentalist codes that go against our core values of compassion, tolerance and humanity… We do not want sharia councils or other religious bodies to rule our lives. We demand the right to be valued as human beings and as equals before one law for all. We demand the right to follow our own desires and aspirations”.

Meanwhile, the Review Committee trudged on and in February presented its report to the British Parliament with three recommendations. One, amendments to the Marriage Act 1949 and the Matrimonial Causes Act 1973 to ensure that civil marriages are conducted before or at the same time as the Islamic marriage ceremony, bringing Islamic marriage in line with Christian and Jewish marriage in the eyes of the law. (Among other things, the recommendation was seen as a way of blocking sharia-promoted polygamy). Two, “awareness campaigns… In particular, a clear message must be sent that an arbitration that applies sharia law in respect of financial remedies and/or child arrangements would fall foul of the Arbitration Act and its underlying protection”. Three, “creation of a body that would set up the process for councils to regulate themselves. That body would design a code of practice for sharia councils to accept and implement”.

Interestingly, contrary to the claim of the authors about the UK’s “sharia courts whose rulings are enforceable with the full power of the English judicial system”, a statement issued by the Home Office following the report of the Review Committee stated: “We will not be taking forward the review’s recommendation to regulate sharia councils. Sharia law has no jurisdiction in the UK and we would not facilitate or endorse regulation, which could present councils as an alternative to UK laws.”

The Committee warned against any attempt to ban sharia councils as they are likely to go “underground” since “the evidence heard by this review indicates that the vast majority, in fact nearly all people using sharia councils, are women … In most of these cases (our evidence indicates over 90 per cent) the women are visiting the council seeking an Islamic divorce”.

Responding to this, a joint letter dated February 6, addressed to the home secretary by several women’s organisations stated: “Sweeping statements are made about the ‘choice’ that Muslim women make to approach such councils without giving any consideration to the highly constrained religious context in which that ‘choice’ is made. The review is utterly silent on the crucial concept of ‘zina’ (sex outside marriage), the grave sin punishable by death in many Muslim countries. It is fear of ‘zina’ which compels many women, even those with civil divorces to seek an Islamic divorce. Procedural changes in sharia councils will not diminish their role in spreading this concept; to which they provide the only ‘solution’.”

Leave alone being a constitutional expert, I am not even trained in law. But this much I know: Justice from India’s courts of law is a long-drawn and costly process, making justice beyond the reach of India’s poor. An alternative dispute redress mechanism may be a great idea. But what fidelity to the constitutional principles of equality (Article 14), non-discrimination (Article 15) and right to life with dignity (Article 21) can we expect from a sharia court — by whatever name called — headed by clerics who believe and preach that Islam means discriminatory, unjust, inhuman and demeaning anti-women practices such as triple talaq, nikah halala and polygamy?