On June 15, 2017, Congress member of Parliament Shashi Tharoor claimed that 23 of the BJP-led government’s new programmes were merely renamed versions of schemes launched by the previous governments led by his party. 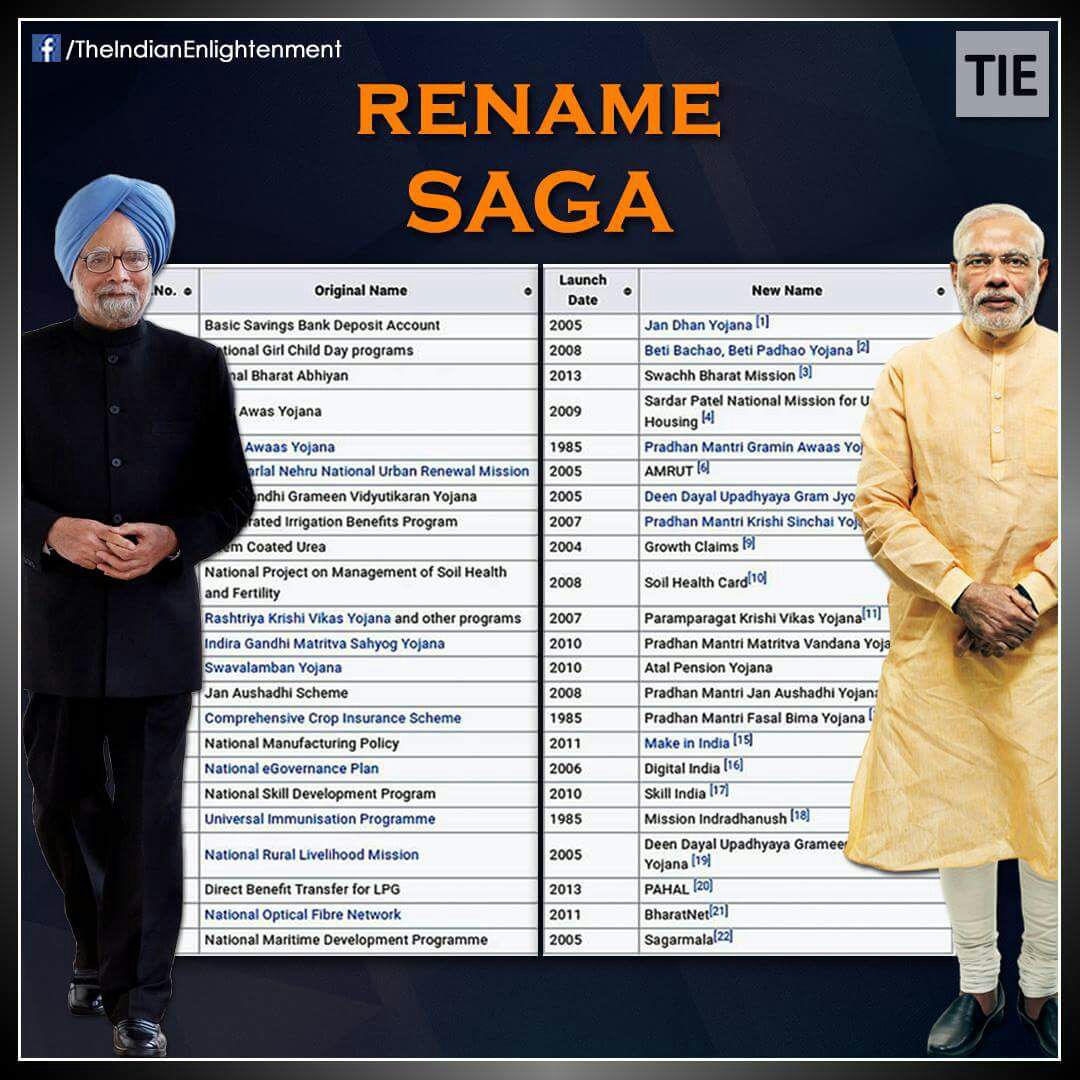 We found that 19 of the 23 programmes were indeed renamed versions of older schemes, as Tharoor claimed. Here’s our analysis:

Basic Savings Bank Deposit Account (BSBDA) was a no-minimum-balance service with all facilities of a normal banking account except that withdrawals were limited to four a month, according to this Reserve Bank of India (RBI) circular dated August 17, 2012. The accounts came with an automated teller machine (ATM)-cum-debit card too.

The BSBDA accounts were also meant for beneficiaries of government programmes, according to this answer in the Rajya Sabha (upper house of Parliament) on December 13, 2012.

Under the Pradhan Mantri Jan Dhan Yojana (PMJDY), launched on August 28, 2014, an accident insurance cover of Rs 1 lakh, overdraft facility up to Rs 5,000 after six months and a life insurance of Rs 30,000 were added to BSBDA accounts.

Unlike BSBDA, PMJDY accounts had a credit limit of Rs 1 lakh because of which pension reimbursements were getting rejected, The Financial Expressreported on September 8, 2016.

While BSBDA covered only villages with above 2,000 population, PMJDY has been extended to all areas–rural as well as urban.

“They are more or less the same. All accounts opened prior to August 28, 2014, were BSBDA. Since then, they have all become PMJDY accounts. It’s only a change of nomenclature,” Prem Singh Azad, deputy general manager, Allahabad Bank, who is involved in the bank’s financial inclusion programme, told IndiaSpend.

The Congress-led United Progressive Alliance (UPA)-I declared January 24 as the National Girl Day in 2008-09 and several objectives associated with previous continuing programmes were adopted as targets.

Beti Bachao, Beti Padhao Yojana (BBBPY), launched in January 2015 under the ministries of women and child development, health and family welfare and human resource development, was a consolidation of old programmes scattered across schemes and ministries under the UPA government.

For instance, the girl child education programme of BBBPY was a repackaging of older education schemes such as the Sarva Shiksha Abhiyan, according to this February 2016 report by the Centre for Development and Human Rights, a research and advocacy organisation in New Delhi.

Similarly, BBBPY’s objectives of improving the child sex ratio and reducing school dropout rates among girls were already present in the UPA’s Dhanalakshmi and Sabla schemes, respectively. Dhanalakshmi was later discontinued as states already had better schemes in place.

Nirmal Bharat Abhiyan was the new name adopted for the Total Sanitation Campaign on April 1, 2012 under UPA-II, according to the Abhiyan’s guidelines.

Total Sanitation Campaign was the new name given to the Central Rural Sanitation Programme–launched by the Congress in 1986–in 1999, according to the drinking water and sanitation ministry’s website.

A parliamentary committee, headed by Biju Janata Dal member Pinaki Mishra, had even asked the government in December 2014 how merely changing the name could accelerate implementation, The Telegraphreported on December 30, 2014.

The UPA’s Rajiv Grameen Vidyutikaran Yojana was “subsumed” under Deen Dayal Upadhyay Gram Jyoti Yojana, according to this government release on July 23, 2015.

NDA’s urban development minister Venkaiah Naidu had said on assuming office that they would replace Jawaharlal Nehru National Urban Renewal Mission (JNNURM) with their own urban renewal schemes, The Hindureported on May 29, 2014.

JNNURM was launched on December 3, 2005, for an initial period of seven years and then extended for two years up to March 2014, according to this Rajya Sabha answer on December 6, 2012.

A comparison of some key objectives of the two programmes shows that under the NDA government, the targets of UPA’s umbrella programme have been spread over several schemes.

The “sectors covered under JNNURM and [AMRUT and other urban development programmes] overlap significantly,” according this March 2016 report by PricewaterhouseCoopers, a global consultancy .

“[V]arious urban sector components [that] were earlier addressed through a single mission (JNNURM) … have now been split across missions [such as AMRUT, Smart Cities Mission and Swachh Bharat Mission],” the report said.

As government websites (click here, here, here, here and here) do not reveal when exactly the programme was launched in 1996, it is difficult to check this claim, as three prime ministers–Congress’s P.V. Narasimha Rao (till May 16), BJP’s Atal Bihari Vajpayee (May 16-June 1) and Janata Dal (Secular)’s H.D. Deve Gowda (June 1 onwards)–governed India during 1996.

The watershed management programme goes back to the late 1980s when the country was mostly under Congress’s rule.

Neem-coated urea was included in the Fertiliser (Control) Order of 1985 in 2004, according to government-owned National Fertilizers’ website, and was notified on June 2, 2008, according to this government communication.

A soil health card was “added” to the National Project on Management of Soil Health and Fertility, according to the Outcome Budget 2015-16 of the agriculture and cooperation department.

The centre would earlier provide support to states for issuing soil health cards under the central scheme, according to Lok Sabha (lower house of Parliament) answers (click here and here).

Under the UPA government, soil health cards were also issued under the National Mission for Sustainable Agriculture, one of its several organic-farming programmes, according to the Outcome Budget 2015-16. This scheme was also merged with NDA’s renamed Soil Health Card programme.

“Some existing components … have been clubbed together as a cluster based programme and named Paramparagat Krishi Vikas Yojana,” according to the Outcome Budget 2015-16 of the agriculture and cooperation department, FactCheckerreported on July 22, 2015.

The ministry of women and child development’s website does not use the new name–Pradhan Mantri Matritva Vandana Yojana–for the maternity benefit programme (see the latest release dated May 19, 2017) but archives releases under the Indira Gandhi Matritva Sahyog Yojana under the same head.

A senior ministry official was quoted as saying the name had been changed, Hindustan Timesreported on May 25, 2017.

Even as the Modi government folded Congress’s Swavalamban Yojana–a pension scheme for unorganised sector workers launched on September 29, 2010–under its Atal Pension Yojana, the features of the two schemes remain the same, according to this comparison by the Rajiv Gandhi Institute For Contemporary Studies, a think tank in New Delhi.

The decision to launch the Jan Aushadhi scheme, a programme to supply unbranded medicines at lower prices, was taken on April 23, 2008. The first store under the scheme was opened on November 25, 2008, according to the Bureau of Pharma PSU in India, established under the department of pharmaceuticals on December 1, 2008, to coordinate the scheme through government-owned companies.

The scheme is now called Pradhan Mantri Bhartiya Janaushadhi Pariyojana, according to this Lok Sabha answer on March 14, 2017.

The 1985 Comprehensive Crop Insurance Scheme concluded in 1999, according to this report of the agriculture and cooperation department.

Pope Francis - All Religions are true , Adam and Eve is a Fable, HELL is a metaphor
India - In A Year, Bank Fraud Doubles
India - The Importance of a Caste-Based Census
Autistic kids glide through 48-hr skating feat