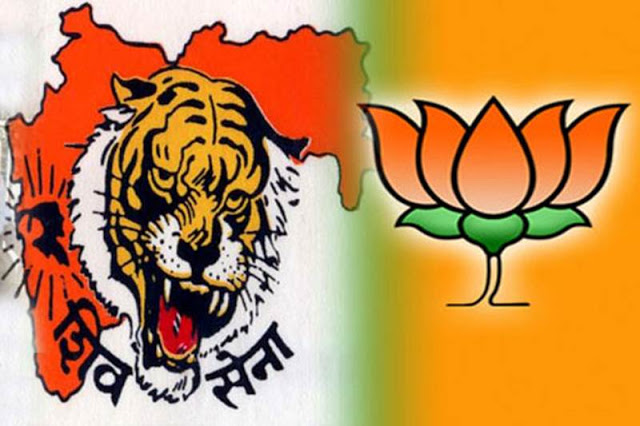 Mumbai: Taunting ruling ally Bharatiya Janata Party, the Shiv Sena on Saturday said absconding scamster Nirav Modi “should be made Reserve Bank of India Governor to finish off the country”. Referring to the Punjab National Bank (PNB) fraud which came to light this week, the Sena said it is “clear that Nirav Modi and his family had fled” the country early last month.

“However, just recently (last week of January), this gentleman was seen and photographed with Prime Minister Narendra Modi in Davos (Switzerland),” the Sena said in stinging editorials in the party mouthpieces ‘Saamana’ and ‘Dopahar Ka Saamana’ today. Nirav was a sympathizer of the BJP and played a leading role in collecting funds for it during the elections, it added.

“However, we are not implying that he managed to loot the (PNB) bank with the blessings of BJP leaders or that a share of it (loot) even went to the party coffers. But, Nirav always strived for the BJP’s financial prosperity and helped it win elections with the mountains of cash he built,” the Sena said sarcastically. That these monies belonged to the national exchequer which he blatantly plundered, has now been exposed by this scam, and lays hollow Prime Minister Modi’s famed slogan – “Na Khaunga, Na Khane Dunga”, the edit noted.

“We want to know how he managed to turn up with the group of industrialists who met PM in Davos when a complaint against him had already been lodged by PNB? Perhaps, if his Aadhaar Card had been linked to the bank accounts, this could have been clear,” the Sena said, in another jibe. The tragedy is that the common man cannot get hospital treatment or even a funeral without an Aadhaar Card, but a man like Nirav Modi could siphon off Rs 11,500 crore from a bank without an Aadhaar Card, it pointed out.

The Enforcement Directorate and other agencies swooped on Nirav’s properties and reportedly laid hands on Rs 5,100 crore worth of diamonds and jewels, but even the Kingfisher Airlines chief Vijay Mallya and Lalit Modi left behind huge properties before fleeing the country, the Sena said. “Several political leaders have landed up in jails based on half-truths or false charges like (former Railway Minister) Lalu Prasad Yadav or (former Maharashtra Deputy Chief Minister) Chhagan Bhujbal. But, (ex-Maharashtra Minister and Congressman) Kripa Shankar Singh managed to emerge unscathed, very much like Nirav,” the Sena observed.

During the 2014 elections, many rich industrialists stood behind the BJP, but with this scam their characters are laid bare, while the tall claims of a “transparent and corruption-free government” have been blown to tatters in the past four years, it said. “In contrast, poor farmers who cannot repay loans of Rs 100-500 are forced to commit suicides and their lands are seized, but the industrialists who have committed a dacoity of over Rs 150,000-crore on the country are scott free with the blessings of the government,” the Sena said sharply.

The country is being run on advertisements and image-building for which crores of rupees are being spent, but when a person like (ex-RBI Governor) Raghuram Rajan spoke about the loot perpetrated in the country, he was shunted out.