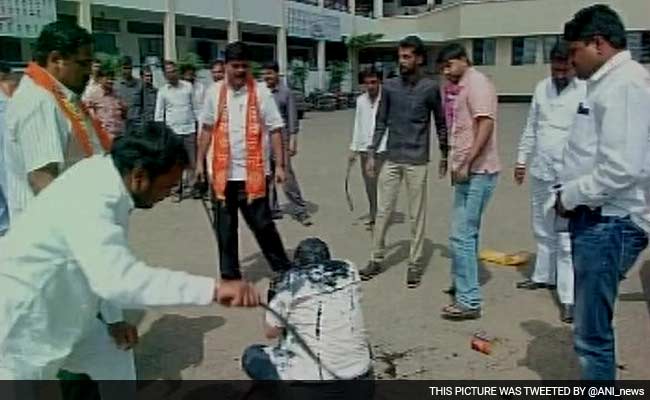 The injured RTI activist has been admitted to a hospital in Latur.

MUMBAI:  Shiv Sena workers today assaulted and blackened the face of a Right to Information activist at Latur in Maharashtra’s Marathwada region, after he “exposed” an illegal construction case.

The activist Mallikarjun Bhaikatti had, through an RTI query, revealed that around 14,000 square feet illegal construction was carried out in a four-storeyed building and boys hostel on the Latur-Nanded road.

The Sena workers brought Mr Bhaikatti to the college premises today when around 4,000 students were present and assaulted him with an iron rod, before blackening his face.

The injured RTI activist has been admitted to a hospital in Latur.

Earlier this month, Sena workers had blackened the face of Sudheendra Kulkarni, chairman of the Observer Research Foundation, in an ink attack ahead of the launch of ‘Neither a Hawk Nor a Dove: An Insider’s Account of Pakistan‘s Foreign Relations’ authored by former Pakistan foreign minister Khurshid Mahmud Kasuri.