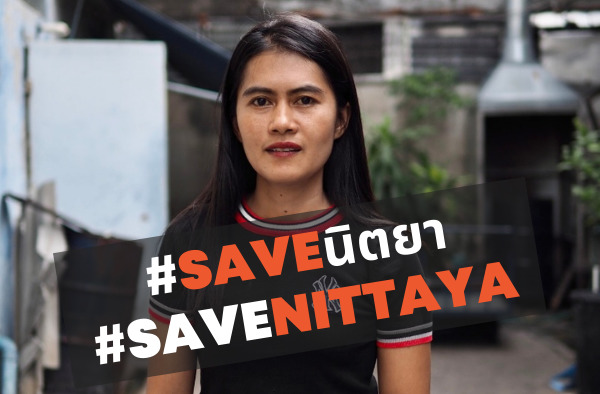 Defending our land is NOT A CRIME!”

And yet, 14 villagers of Sab Wai village, Thailand, have been unfairly convicted of trespassing, utilizing, and clearing land in Sai Thong national park, a land on which they have been living for generations, making their livelihood and protecting the forest.

The villagers are currently released on bail, but their cases are still ongoing, and they are to be heard by the Supreme Court very soon.

Nittaya Muangklang is one of the villagers, and a fearless and courageous Woman Human Rights Defender leading the other villagers fighting back the injustice they are facing.

On March 3rd, 2021, the final supreme court hearing for Nittaya’s cases will take place. The Thai Supreme Court will decide whether Nittaya is guilty or not. If the court finds her guilty, she will have to go back to jail for 12 months and pay over 190,000 THB fine!!!

With this case, Thailand’s military-backed government is once again showing a total lack of interest in the well-being of its own citizens.

Even worse: the government is using its “Forest Reclamation Policy” and NCPO Orders 64/2014 & 66/2014 to criminalize small communities, poor villagers and indigenous peoples and evict them from their lands, under the pretext of combating climate change.

BUT this policy is nothing but LIES. Thailand is a participant in the Forest Carbon Partnership Facility (FCPF), a global partnership, funded by the World Bank, aiming to reduce carbon emissions and combat climate change. To help achieve this goal, the Thai government issued this false climate solution, meant to stop the misuse of forest lands by large businesses, but instead, small communities were forced to return their land.

All of this is happening even though NCPO order 66/2014 states “all operations must not impact the poor who have been living in the land”, and that the Ministry of Natural Resources and Environment confirmed that the Sab Wai villagers are poor villagers and not capitalist investors in its 14 November 2019 Memorandum, after the appeal court hearings.

So why was the policy unfairly applied to them? Why weren’t they protected under NCPO order 66/2014?

Partly because the authorities have been using the ambiguity of the term “poor” to their benefit.

And because of their eviction, farmers and other local communities have lost their home, land, and livelihood. This has caused them to be pushed into extreme poverty.

There’s more: the 14 Sab Wai villagers were manipulated and threatened into signing the documents to give away their land. Nittaya and her sister were not even the ones who signed the paper. The government officers made their Mom (who can’t read) sign it, using blank paper and telling her to just write her own name and her daughters’ names. They told her to just sign it and she would be able to continue living here. How wrong is that?

We need your help! Sign this petition and help us #SaveNittaya and #SaveSabWaiVillagers! They are the first to bravely challenge the forest reclamation policy at the Supreme Court. They need all the support they can get to fight Thailand’s false climate solution, be free and continue living on their land with their families.

We cannot stay silent in front of such injustice! The Thai government and the World Bank must be held accountable for their actions and involvement in this unfair criminalization of land rights defenders!

MAKE YOUR VOICE COUNT! SIGN THE PETITION &
JOIN US TO URGE THE SUPREME COURT TO:

Forum vows to oppose Nuclear Plant at Kovvada
TV actor Sai Ballal , of ' Udaan' serial arrested for sexual harassment #Vaw
Centre has its eyes set on NE resources, not on people’s woes
Could There Be a Terrorist Fukushima?