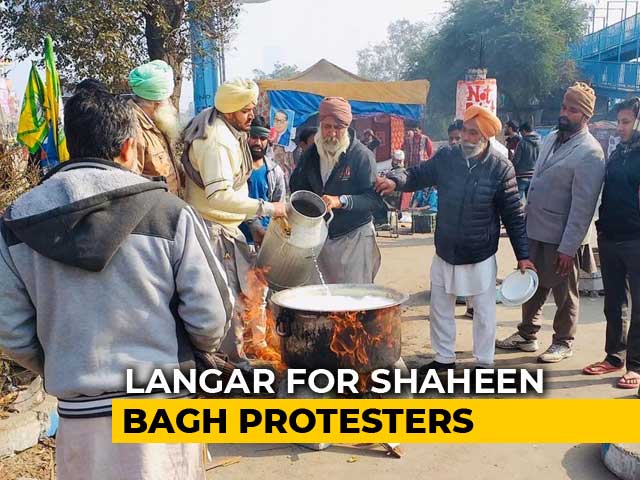 The Shaheen Bagh protest, on now for more than a month, has made it to headlines due to its unique nature where women are drivers of this protest.

A group of Sikh men from Punjab, part of a farmers’ union, started a langar at Shaheen Bagh13New Delhi:

Thousands of women holding protests in Shaheen Bagh against the citizenship law, had some unexpected company today: A group of Sikh men, part of a farmers’ union, who came all the way from Punjab. Turning up on the road, they found themselves a corner under a pedestrian overbridge and started unpacking — cooking gas and stove, huge utensils reminiscent of festive catering, and sacks of provisions. Within an hour, a langar — the traditional community kitchen of Sikhs — was up and running.

“We have come here to show solidarity against the Citizenship Bill,” one of them said, underscoring that they were against the “divisive politics” of the government.

“Modi wants to rule by making people fight with each other. He is not giving jobs to farmers, instead he is making the Muslims and Sikhs fight,” he added to grins and cheers from the locals.

The Shaheen Bagh protest, on now for more than a month, has made it to headlines due to its unique nature. It is women who are drivers of this protest, joining in irrespective of caste and religion, taking turns to sit in at the locality. While some come in the mornings, others sit through the long nights braving the bitter winter chill.

It has provided inspiration to woman in other corners of the country, and similar protests have started in Bihar and Uttar Pradesh.

Over the last few days, protests have mushroomed in Patna, Lucknow and Prayagraj, where women declare that they would continue till the government withdrew the Citizenship Amendment Act and the National Register of Citizens.

The visitors who came to cheer the women on, said they were from two districts of Punjab and the women of their family have accompanied them.

As the men started on the cooking, the women found space beside the thousands on a sit-down protest on the other corner. Food in a langar is simple vegetarian fare – roti, daal, vegetables and a dessert, usually kheer.

Taking turns to stir the kheer along with the local men, some of them Muslims, one of the visitors said over the coming days, they were expecting more people from Punjab to come and join.

Asked how long they will be in Delhi, they responded with an eloquent shrug, indicating indefinitely.