Silicosis- The Breath of Death 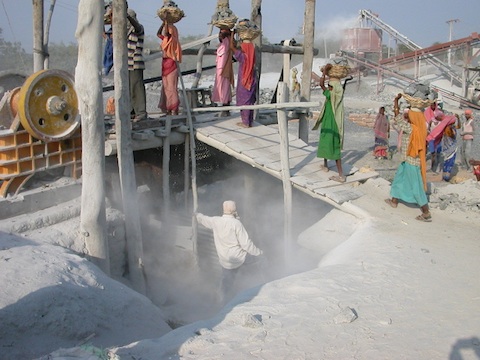 Occupational diseases like silicosis have been neglected for too long.

It is a disease that is a silent killer. An estimated 3 to 10 million workers in India are affected by it. Yet, it is not treated with the kind of attention it deserves. The recent decision of a labour court in Odisha to award compensation to 16 families who had lost their main bread earner to silicosis, a silent and much underestimated killer disease, has exposed the dark underside of unregulated and hazardous mining and industries. The 16 men, from Madarangajodi village in Keonjhar district, who died had worked in a unit that ground pyrophyllite into powder. In the process, they were inhaling silica dust without being aware of the consequences. Over time, their lungs collapsed and the men died, as silicosis is incurable. They left behind what was called, a “village of widows.” Only when a local organisation moved the National Human Rights Commission was the matter investigated. It was esta­blished that these men had died of silicosis. They need not have died if the outfit where they worked had taken simple precautionary measures such as giving them safety gear and using processes that minimised generation of silica dust. The court has ordered the Odisha government to pay the families₹46 lakh as compensation.

The ruling was made possible because of an important Supreme Court judgment in 2016 in a case involving 238 workers who died of silicosis after working for more than 10 years in quartz-crushing factories in Godhra and Balasinor in Gujarat. These men were from tribal villages in Alirajpur, Jhabua and Dhar districts of Madhya Pradesh. Like the men in Odisha, they too became ill as initially, silicosis is asymptomatic. The dust particles are odourless. So you are not aware that you are inhaling something that will eventually kill you. Once again, it took a non-governmental organisation to intervene on their behalf and take the matter up to the highest court. The apex court’s ruling was strong and unambiguous. Not only did it order the Gujarat government to pay₹7.14 crore as compensation to the next of kin of the 238 workers who had died but also ordered the Madhya Pradesh government to rehabilitate 304 workers who survived but were ailing.

What is common in both these stories is the fact that the men were employed on short-term contracts that deprived them of benefits to which workers are entitled under the law. Many such workers are migrant labourers, often from poverty-stricken areas in a neighbouring state. Also, the factories where they worked did not invest in any protective gear for the workers even as they worked in a deadly dust haze. Nor was there any medical help available when they developed breathing difficulties. With no system to monitor the state of their health, there was no evidence that their medical condition was directly related to their place of work. Finally, when they were unable to work, they returned to their poor tribal villages to slow and painful deaths.

Ironically, silicosis is one among several occupational diseases that is recognised under the Employees’ State Insurance Act, 1948 and the Workmen’s Compensation Act (1923). But these and other laws, such as the Factories Act, 1948 and the Mines Act, 1952 only benefit those workers who are part of the formal organised sector. The majority of people exposed to such hazards are in the informal sector where they cannot bargain either for better wages or for safe work conditions. Diseases like silicosis are often mistaken for tuberculosis, a treatable condition. When a worker dies of silicosis, it is virtually impossible to certify this as the cause of death. As a result, the data on silicosis deaths, and a number of other occupational diseases like pneumoconiosis, the “black lung” disease that afflicts coal miners, or asbestosis, classified as a killer in the Factories Act or byssinosis that affects textile workers exposed to cotton dust, are gross underestimates.

These occupational diseases are not unique to India. In countries like the United Kingdom, for instance, specific steps have been taken to deal with occupational diseases such as silicosis or pneumoconiosis by making it mandatory for industries, where workers are exposed to hazardous substances, to implement safety measures. These include not just safety gear for every worker but also using methods of extraction that reduce the quantum of dust generated. The law also requires all workers thus exposed to go through regular health check-ups and monitoring as it recognises that silicosis, for instance, manifests itself over a long period of time following exposure. It can only be detected if the individual’s health parametres are monitored and as it is incurable, the only way to prevent the disease is to limit exposure to the hazardous particles.

The Odisha court’s ruling and the earlier Supreme Court judgment ought to prod state governments to pay heed to this health crisis that faces only the very poor. After the Bhopal disaster of 1984, the Factories Act was amended in 1987. It now recognises hazardous processes and also defines the occupational health facilities that need to be in place. Unfortunately, as with so much else that has to do with the welfare of the most vulnerable in India, such provisions remain on paper and are rarely enforced, even to benefit those who would qualify under these laws. On the other hand, the majority of the workers, employed in mines, quarries and factories, toil in a nether world where their very existence is rendered invisible.

If this Govt Can’t Give Justice to Bhima-Koregaon Victims, Bahujans Will Vote Them Out: Azad
राजस्थान - कोई नहीं हटेगा हल वहीँ चलेगा- देवली बाई
Chhattisgarh - IG Kalluri issues a call for excommunication of Soni Sori, Linga Kodopi and others wo...
No roll Nos. for 2L SC students as Punjab govt fails to release funds