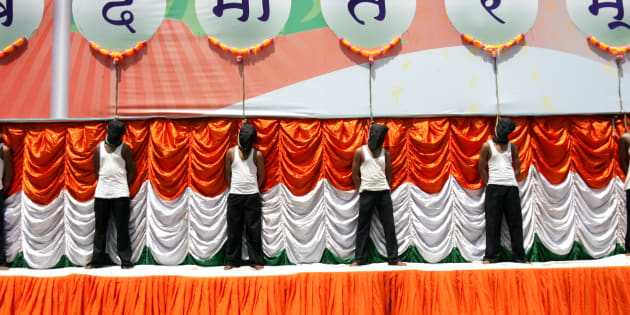 The promise of sabke saath, sabka vikas (to stand by all communities and work for their development) with which Yogi Adityanath became the new chief minister of Uttar Pradesh stands on shaky ground, days after he assumed power.

Following the crackdown on slaughterhouses and the harassment unleashed by the anti-Romeo squad, the mayor of Meerut has read the riot act to those who refused to sing Vande Mataram at the beginning of the Nagar Nigam board meeting in the city.

Mayor Harikant Ahluwalia allegedly didn’t let seven corporators take part in a meeting after they refused to participate in the singing of the national song. He has also allegedly declared that anyone who doesn’t comply with this rule won’t be allowed to cross the threshold of the board room or join meetings.

The decision has, understandably, enraged some members of the council, which has around 80 members, for its undemocratic overtone.

According to The Times of India, the recital of the national song is a longstanding tradition at the Meerut Nagar Nigam, though under the Samajwadi Party government, those wishing to leave the room during the performance were allowed to do so and join in once it was over. Since the Bharatiya Janata Party (BJP) government has come to power, the rules seemed to have changed drastically: either sing along with the rest or be effectively expelled from the body.

The situation came to a boiling point on Tuesday as some members, mostly Muslims, were leaving the room before the recital of the national song commenced. They were informed by some BJP members that “Hindustan mein rehna hai to Vande Mataram kehna hoga (If you want to live in India, you have to sing Vande Mataram).” To placate the enraged majority, the mayor was allegedly forced to pass a resolution through voice votes to make the singing of the national song mandatory at the council.

In his defence, Ahluwalia argued that the majority had no objection to singing Vande Mataram, though it doesn’t stand up to logic. The recital of the national song is not mandated by any law of the land, unlike the national anthem that requires all citizens to stand up while it is performed. The Supreme Court made the playing of the national anthem compulsory before screening of movies in theatres across India and set guidelines for citizens to behave themselves during the 52-seconds for which it runs.

Since Ahluwalia’s decision affects members of the council belonging to the minority community the most, the latter are seeing it as at attack on their values and beliefs. Historically, Muslim leaders have taken a complex stance towards the singing of the national song, which was composed by Bengali writer Bankim Chandra Chatterjee in the 1870s and included in his novel Anandamath (1881).

Written in six stanzas, using Bengali and Sanskrit vocabulary, the first couple of verses pay homage to the nation, imagining her as the Mother. Praising her magnificence and generosity, her strength and fortitude, these lines were first sung in a political context by Rabindranath Tagore, when he performed it at the 1896 session of the Indian National Congress. Freedom fighter and revolutionary Sri Aurobindo, who rendered it in English, described it as the national anthem of Bengal, since it was widely sung during the 1905 partition of the state.

A section of the minority communities does not have any objection to singing the first part of the hymn, which asks people to bow at the feet of the nation, imagined as the Universal Mother. However, it is the latter part of the song, which explicitly refers to Devi Durga, that is often perceived as objectionable by monotheistic religions like Islam.

In its standard form, the hymn is curtailed for public singing, requiring only the first two stanzas to be sung. Be that as it may, any citizen of India is free to abstain from singing it, should they feel so, and cannot be penalised or discriminated against for taking such a decision.http://www.huffingtonpost.in/2017/03/30/sing-vande-mataram-if-you-want-to-live-in-india-meerut-civic-bo_a_22018094/