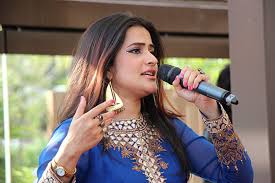 Although most people from Bollywood seem to steer clear of controversy and not get on the wrong side of the industry’s Bhaijaan — actor Salman Khan, singer Sona Mohapatra decided to speak out. Lashing out at Salman for him comparing himself to a raped woman after a grueling shoot of wrestling, Sona wrote, “Women thrashed,people run over,wild life massacred & yet #hero of the nation ‘Unfair’.India full of such supporters (sic).”

After this post, she was trolled on social media by Bhai’s fans. Sona was not deterred, She then went on to talk about it in Facebook

A 21 year old was brutally gang raped in Bihar’s Motihari town. Guns & wooden sticks inserted into her, putting her in a critical condition. The culprits are absconding. Yet again.
Meanwhile Soni Sori has been fasting for the 9th day to get justice for other such brutalised & killed women in Chattisgarh.
No TV news debate on this. No glamour there I suppose. Every time I was called to opine on these debates the last few days, the moment I brought up the bigger issue that needs to be talked about & not merely what I said about a comment made by an imbecile..silence..no takers.
So I avoided them all.
The fact that I have been mercilessly trolled in the last 48 hours, with 1000’s of rape threats, inundated with morphed naked porn images & threatened to be put out of work & lots more is only an indication of the poison in our society. Poison that gets a chance to flow freely when national ‘Icons’ created not only by their followers & audience but encouraged by their peers & media, regularly misbehave, talk rubbish, do rubbish, don’t get punished, don’t learn from their mistakes but instead get encouraged, celebrated, pack cinema halls & become brand ambassadors of ‘goodwill’.

Depressing to say the least.

Can’t give up though. I have trained all my life for this.
Have to get up, dust myself & live a life worth living.

& in a Billion plus country, containing the largest population of many many good, honourable, hard working people, I will not let the the stupid, dangerous, nasty few win. Who will put us out of ‘work’?? Salman Khan??!! That ‘talented’ (!?) thug? I don’t think so. I can think of 100 different ways to make a living & thrive but I will choose to sing & perform my music till the last day. Not him, not anyone can stop that.
I cannot even imagine the pain of that 21 year old girl, her family & the struggles of Soni Sori but I do know that I can commit to their cause. We are all linked up by the same umbilical cord.
Rape is no joking matter.