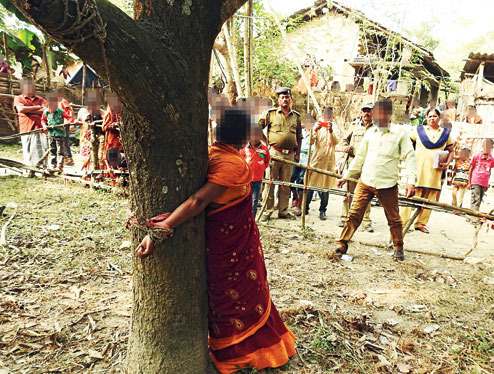 Villagers watch as policemen arrive in the Malda village to rescue the woman tied to the tree on Friday. Picture by Surajit Roy

Malda: A housewife was allegedly dragged out of her father’s house by around 40 people who tied her up to a tree and tortured her for over six hours in an Englishbazar village this morning after she had refused to withdraw a six-year-old criminal case against three men.

A team from the Englishbazar women’s police station went to the village, rescued the 34-year-old woman and admitted her to Malda Medical College and Hospital.

In 2009, the police said, the woman had filed a complaint against three construction material suppliers, Samsul Sheikh, Ziaul Sheikh and Raisul Ali, for dumping stone chips, sand and bricks on a road in front of her father’s house.

“When I protested against the dumping of building materials in front of my father’s house six years ago, three men beat me up. After that, I filed a police complaint against the trio. The case is being heard in the district court now,” the woman said.

Police sources said Samsul, Ziaul and Raisul had been arrested and they were out on bail at present.

The woman said she had come to the village on Wednesday from her husband’s house.

” The accused came to me and threatened me with dire consequences if I did not withdraw the case. They wanted me to attend a salisi meeting last night and I refused. Around 6am today, along with other villagers, the three dragged me out of the house, tied me to a tree and beat me up. They slapped me, scratched my face and pulled the hair, saying I was a woman of loose morals and deserved to be beaten. I was tortured till the police came and rescued me,” she said.

Sources said the police had reached the village around 1pm and the woman was freed around 1.45pm.

The woman’s younger brother said the accused men had held a meeting in the village last night.

“My sister refused to attend the meeting and then they decided that she would have to pay a fine of Rs 50,000. She refused to heed their threats. Around 6am today, Samsul, Ziaul, Raisul and 40-50 other villagers surrounded our house. They dragged my sister out. I, my brother and father were not allowed to come out and rescue her. Some other villagers called police who came and rescued my sister,” the brother said.

The alleged attackers included women and the 10 people named in a complaint filed by the victim have left the village.

The woman’s husband is a day wage labourer outside the state and they have a six-year-old son.

Around 6pm, she was discharged from the hospital and went to the Englishbazar women’s police station. Sources said she didn’t want to go back to her father’s house after the assault.

Asked about the incident, the local panchayat pradhan of the Trinamul Congress cast aspersions on the woman’s character. “I have heard of the incident. The villagers told me that the woman was of a rough nature and low morals. The matter is being investigated by the police.”

The superintendent of police, Malda, Prasun Banerjee, said the police had received information around 11am about a woman being tied to a tree that was around 300m from her father’s house.

“We immediately sent a team from the woman’s police station to rescue her. The woman has lodged a complaint against 10 people, including two women, in connection with the incident. None of the accused was found in the village. We are looking for them,” Banerjee said.