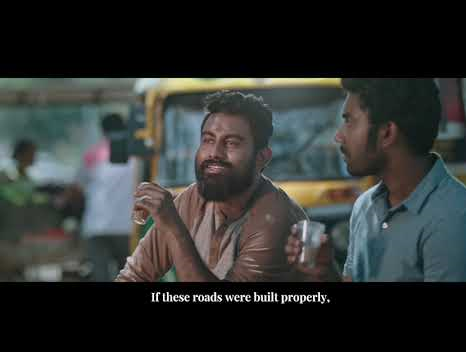 Patriarchy dehumanises men without them realising it. They are conditioned to live up to an ideal of toxic masculinity that encourages them to think and act in a manner that promotes machismo, sexism and violence. As a result, they often objectify women and deny them their rights to their bodies and their choices. For society to be gender equal, men need to free themselves from patriarchy. That’s what the new Swayam campaign is all about. It urges men to think beyond the limits of dated chauvinism and dream of a world where wellbeing, equality and love are the goals to aspire to.

The film holds up a scene familiar to us. A small gathering of men engaged in an inaudible conversation as a girl passes by. The scene evokes our obvious apprehensions. Are they talking about the girl? What will they do next? The muffled conversation leaves a gap that starts getting filled with predictions of unhappy experiences about to follow. The viewer understands the harassment that women face in society and is almost certain that something disrespectful is about to happen. Only, it doesn’t. We are taken back in time to the conversation; this time we can hear what is being said. Those men were discussing the town, its roads, and the need for development. They respect the woman for her accomplishments, and they wish to help her usher in the greater good. The message is clear: to build a gender equal and safe society, men must start to change the way they perceive women, talk and act, and make their essential humanity come to light

Sujoy Roy, ECD, Ogilvy Kolkata:“More often than not, men are ignorant casualties of patriarchy. Patriarchy that allows us to see men only in one dimension. If men change the way they behave or are thought to behave, women will never feel insecure again. We wanted our films to celebrate a different kind of masculinity, one that is useful to society and far from the beliefs we have grown up with. We wanted to make examples of these men who show us a different side of masculinity. Yes, some men have risen to the needs of humanity, beyond the chauvinism of our predecessors. And these men will be the harbingers of change.”

Anuradha Kapoor, Director, Swayam: ‘Patriarchy promotes toxic masculinity that dehumanises men and fosters discrimination and violence against women and girls. This campaign urges men to look inwards, examine the kind of masculinity they want to embrace, free themselves of patriarchal learning and reclaim their humanity. It aims to inspire men to transform the way they view women, the way they talk, behave, and act; thereby creating communities and families where women can live violence free and equal lives. It shows men who view women, not as objects, but as individuals deserving respect, thus leading the way for other men to change.”