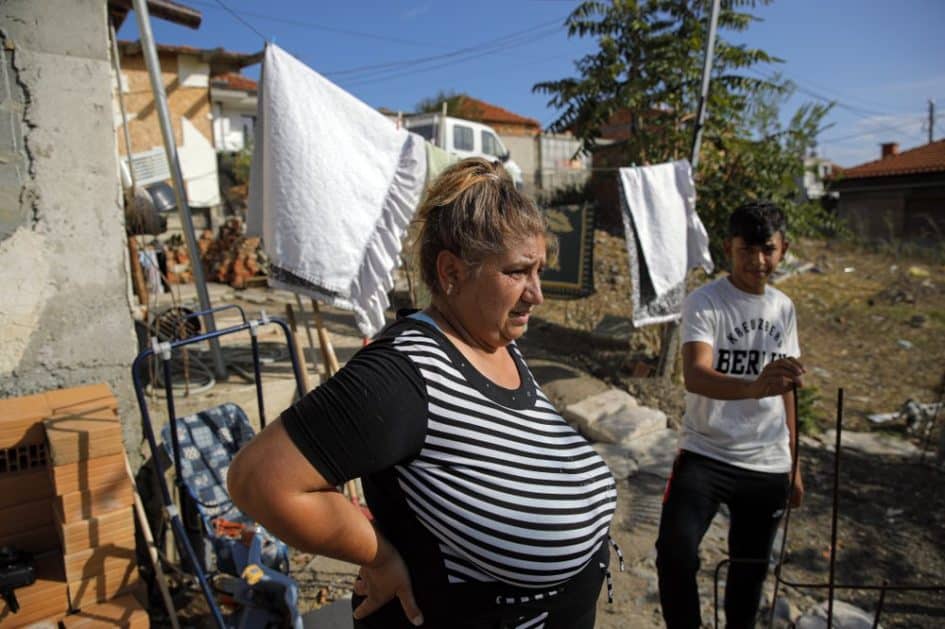 In Bulgaria, Roma communities were sprayed with disinfectant from crop dusters this spring as coronavirus cases surged in the country. (AP Photo/Vadim Ghirda)

By MARIA CHENG and TEODORA BARZAKOVA

BURGAS, Bulgaria (AP) — In Bulgaria, Roma communities were sprayed with disinfectant from crop dusters this spring as coronavirus cases surged in the country. In Slovakia, their villages were the only ones where the army conducted testing. And across Central and Eastern Europe, reports of police using excessive force against Roma spiked as officers were deployed to enforce lockdowns in their towns.

Human rights activists and experts say local officials in several countries with significant Roma populations have used the pandemic to unlawfully target the minority group, which is Europe’s largest and has faced centuries of severe discrimination. With COVID-19 cases now resurging across the continent, some experts fear the repression will return, too.

To make matters worse, activists say such discrimination often draws little opposition from other Europeans and the Roma are reluctant to speak about it, fearing repercussions.

One afternoon, Azime Ali Topchu, 48, said the police-enforced lockdown of her village in Burgas, on Bulgaria’s Black Sea Coast, made her family “really sad.”

“It was hard. Hard. For my whole family to go to work — for my husband and son they had to go, fill in the papers, so they could go through the police checks,” she said, as her three grandchildren played near piles of neatly stacked wood.

But Topchu, who lives in a one-story brick house next to her son and daughter-in-law, was unwilling to go much further than that. The streets of their village were sprayed with disinfectant — though not from the sky — several months earlier.

Topchu said she considered the disinfecting “something that had to be done.”

But other Roma villages — in Yambol, Kyustendil and elsewhere in Bulgaria — were showered with thousands of gallons of disinfectant from helicopters or planes usually used to fertilize crops in March and April, according to local authorities and Bulgarian Roma activists.

“That was clearly racist, because it was only done in Roma neighborhoods,” said Radoslov Stoyanov of the Bulgarian Helsinki Committee, a human rights group. “The broader message that was sent to the non-Roma population was that the Roma are dangerous.”

The Roma people are descended from tribes in northern India, and centuries of persecution and marginalization have left them some of the poorest and least educated people in Europe. Known pejoratively as “gypsies,” many live in segregated neighborhoods, often with limited access to electricity, running water and health care. Many face discrimination in getting jobs, getting medical care and have a shorter average lifespan than non-Roma.ADVERTISEMENT

The stringent measures used against Roma communities come even though no big outbreak was ever reported among them — and echo the way some governments have used the pandemic as cover for repressive tactics. Many European countries do not track coronavirus cases among the Roma, but Slovak officials reported at the end of the summer that there had been 179 cases in Roma districts, out of a population of more than 500,000.

In May, two U.N. human rights advocates issued an open letter calling on the Bulgarian government to suspend its pandemic-related police operations in Roma neighborhoods and to “stop hate speech” against the group after one nationalist party leader described the communities as “nests of infection.”

Officials in other European countries have also targeted the Roma: A mayor in northern Moldova blamed their communities for spreading the virus, while a Ukrainian city official in Ivano-Frankivst instructed police to evict all Roma from the town. This is not limited to Eastern Europe: the mayor of a village outside Paris called on residents to contact the French government “as soon as you see a caravan circulating,” referring to the Roma.

In a recent report, the European Roma Rights Centre documented 20 instances of what it called disproportionate force by police against Roma in five countries — noting that was an unusually high number. In one video on social media, a Romanian officer appeared to repeatedly press a knee into a handcuffed man as he was dragged following the arrest of several people for flouting virus restrictions. Elsewhere in the country, the group reported police used tear gas and pepper spray to disperse a group of Roma, including children, who had climbed on top of an apartment block during the lockdown.

Slovak authorities are investigating allegations that an officer beat five Roma children with a baton and threatened to shoot them after they were found playing outside their village, breaching the national quarantine.

“It is unacceptable for the police to use force against children,” said Maria Patakyova, Slovakia’s public defender of rights, the head of an independent body that aims to uphold human rights. “Not even the pandemic can be a reason to use disproportionate policing methods.”

Last month, Patykova’s office concluded that quarantines in three Roma communities unfairly infringed their right to free movement, though the regional leaders who imposed the measures have dismissed the findings.

Numerous Roma activists and others also raised concerns when Slovak soldiers were brought in to conduct COVID-19 testing in some Roma villages and patrolled neighborhoods armed with automatic rifles.

Juraj Jando, who also works for the rights defender’s office, said despite this show of force, the government failed to help communities meaningfully fight the virus. For instance, people who came into contact with someone who was infected and wanted to stay in a government-run isolation facility had to pay 13 euros ($15) per day to cover their food expenses — a sum that would be beyond many in Roma communities. Authorities were also often quick to seal off entire Roma neighborhoods even when case numbers were below the threshold they had set for such actions.

Petar Lazarov, a spokesman for Slovakia’s Interior Ministry, said all actions taken were in accordance with the country’s public health laws.

In Bulgaria, the authorities’ use of thermal drones to measure the temperatures of entire Roma neighborhoods has raised surveillance concerns.

Krassimir Brumbarov, a Roma health worker in Burgas, where thermal drones were used, noted that people were also angered by the nearly constant police presence in the village.

The mayor’s office in Burgas declined to respond to repeated questions from the AP about why such measures were taken.

As in Slovakia, Lee said Bulgarian authorities did little to help the Roma protect themselves from the virus, noting that at the height of the epidemic in April, about 500 Romani residents in Tsarevo were left without water for 10 days.

Ognyan Isaev, a Roma activist in Sofia, the Bulgarian capital, said he worried that discriminatory measures might be reintroduced if the pandemic worsens, noting that the local authorities who implemented them have faced little pushback.

“Next time,” said Isaev, “it could be even worse.”