Tribal activist-turned-politician says “adivasis want azadi from govt. oppression, azadi from fear of being picked up by CRPF men and being framed as Naxals”

Tribal activist-turned-politician Soni Sori, who was recently attacked with acid in Chhattisgarh, said her face as it is today reflected the fight in Bastar.

“My face today is the face of the fight in Bastar, the condition is the same. I was also jailed in a fake case of being associated with Naxalites, the same way he (Kanhaiya) has been framed for his so called terror links,” Ms. Sori said while addressing JNU students on Monday.

Showing solidarity with the students, Ms. Sori said: “I am happy to be among you all. It is good to see how you all are fighting for your rights. Your struggle is not very different from that of the tribals in Chhattisgarh.”

“We tribals, adivasis also want azadi , we want azadi from the government oppression, from the way we are targeted by the state. We cannot sleep peacefully at night inside our houses. There is always this fear that we will be picked up by the CRPF men and framed as naxals,” she said.

She further added that after Kanhaiya’s release, students should further strengthen their struggle for the release of Umar Khalid and Anirban Bhattacharya.

“I am now waiting for the other students who are jailed in the sedition case to be free. It is sad to see how students who have always stood up for various social causes are now being called anti-national,” the tribal activist said.

Narrating her own experience of being attacked and framed as a naxal, she said: “Whatever I have fought is my own life experience. I was put in jail, I was tortured. Recently, I was attacked with acid after I exposed a fake encounter by the State. In fact people did not even stop after attacking me with acid, they have still been threatening me that they will harm the young girls in my family, rape them, make them disabled. So, the state is like this and we have to fight against it together,” she added.

A large number of students and teachers had gathered to hear Ms. Sori speak. She received a loud cheer from the crowd when she started speaking. “She is a woman of great strength and courage. It is great to hear her speak to us and show solidarity with our university,” a student who came to attend Ms. Sori’s speech said.http://www.thehindu.com/news/cities/Delhi/my-face-today-is-the-face-of-bastars-fight-soni-sori/article8325535.ece 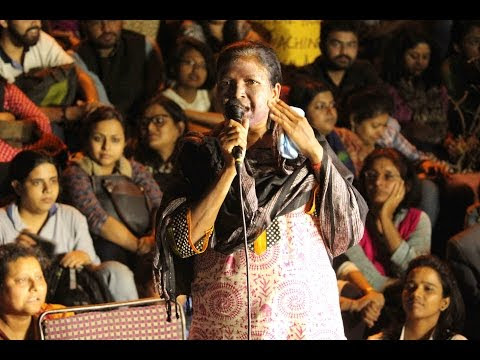 Soni Sori, who was brutally tortured by the Chattisgarh police for her fight in defence of the Adivasis, and who was attacked by an acid-like chemical on 20 February 2016, spoke in support of #StandWithJNU on 7 March 2016.

If I don’t get work, I’ll survive by begging: Rampukar Pandit, the face of Bihar’s migrant workers
#Sundayreading- In The Darkness, Speak Up For Light
#India #Mumbai- Armed men would come, pick women and rape them #VAW
Justice Chelameswar-Inequality more in India, equality keystone of Constitution